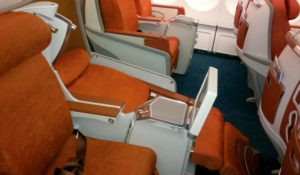 Air Mauritius have launched a couple of deals in business class which on the surface don’t sound like a bargain. This article looks at what you get for your money and other alternative flights to Mauritius.

Is it a good deal?

The deal to Mauritius is from £1906 to be ticketed by 31 January 2017 with travel dates of 1 Jan-19 March 2017 and 19 April to 12 July 2017. Perth is from £2815. Straight away I would say that the Perth deal is not worth the money for the quality of seat. It’s a long way to Perth in an old style sloping seat! Although there is less competition on the Perth route than for Sydney you can still get airlines such as Cathay Pacific, Emirates, Qatar and Etihad to Perth for around £2500-2800 which offer a much better business class. There is also the ability to earn and redeem Avios on Qatar and Cathay. 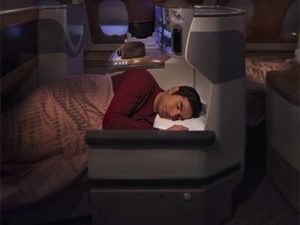 Although £1906 doesn’t sound a great price to Mauritius either, when you look at the alternatives it starts to sound a lot better. If you want to fly to Mauritius direct from London there are only 2 choices BA or Air Mauritius. Whilst BA is currently superior in terms of seats with a fully flat bed, the price difference is huge. Average prices for BA over the same period on business class is over £3000. If you aren’t worried about a fully flat bed then Air Mauritius is probably the best deal.

If you are willing to go indirect then the options expand. The next best offer would be for Emirates via Dubai which comes out around the £2300 mark or Air France in a similar price range. Emirates use the A380 to Mauritius which has good fully flat business class seats. There are also some good prices with Condor via Germany around the £1700 mark but I would be wary of these. The reviews of Condor are very mixed and again, it is an old aircraft with angled lie flat seats. Condor are only rated a 3 star airline by Skytrax.

Air Mauritius business class is currently pretty dated. You may have heard that they currently have 4 A350 aircraft on order, 2 of which are due for delivery this year. However there is no confirmation about which routes they will use them on and if you look at the currently timetable from London there is no sign of them appearing this year yet. They are due to have fully flat beds however, so in the future Air Mauritius may well be a better alternative to BA on the Mauritius route for price and seating.

Currently Air Mauritius are using A340s on the London route with a 152 cm (60-inch) pitch seat. The seats are the sloping flat type with a personal cocoon. They can be adjusted by remote control and offer a massage option as well as inflatable lumbar pouches.


They are currently rated a 4 star airline by Skytrax which is the same as BA. Reviews of food and service suggest that they are OK to good in these areas, certainly no worse than BA.