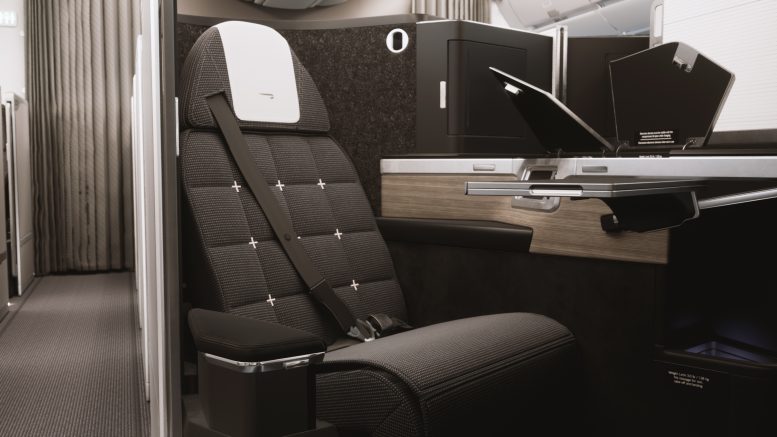 The wait is finally over. After months of speculation and rumours this morning British Airways finally revealed what their new Club World seat will look like…..and it is pretty spectacular! Goodbye hurdling over your neighbour and making awkward eye contact…..hello elegant suites and privacy galore. 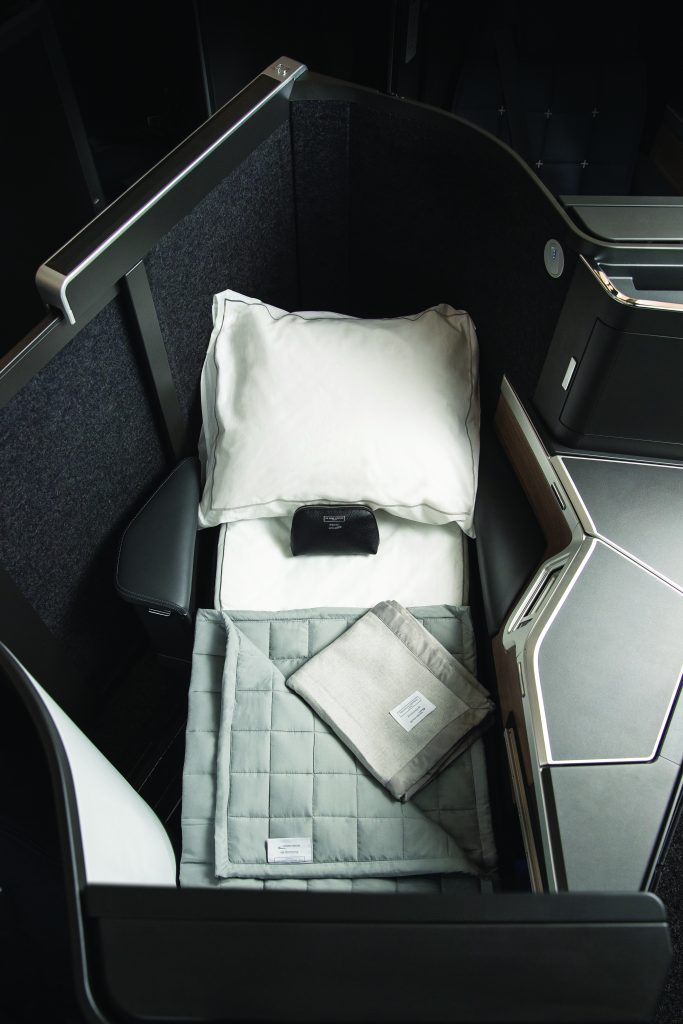 British Airways has unveiled its highly-anticipated new business class seat – ‘Club Suite’ – and confirmed it will arrive on the first of its A350 aircraft in July. 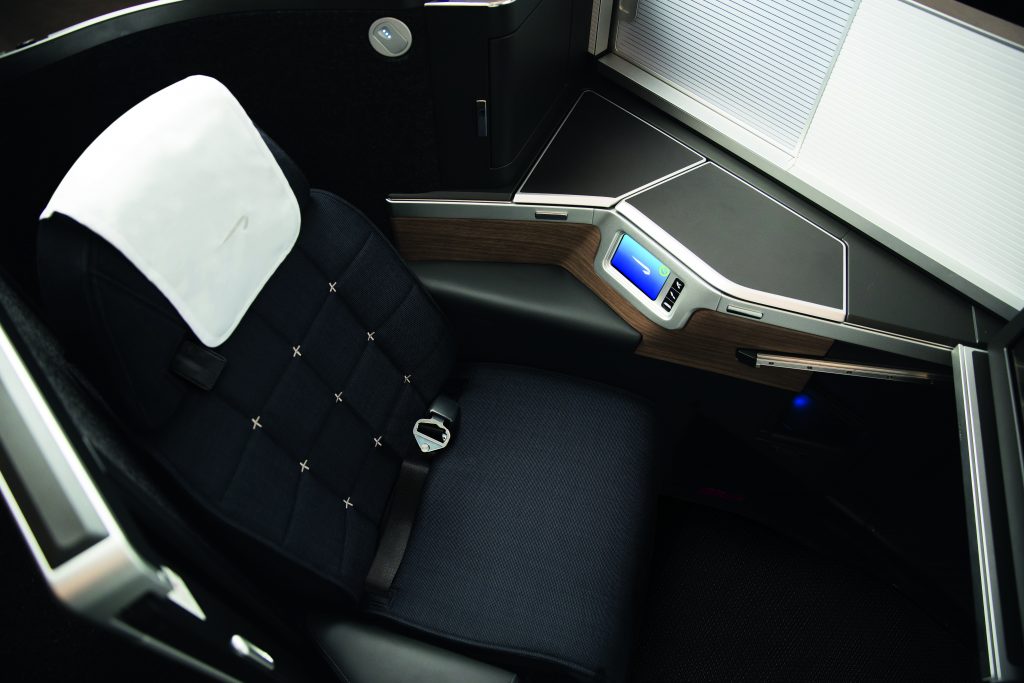 The airline’s newly-branded ‘Club Suite’ offers direct-aisle access, a suite door for greater privacy and flat-bed seats in a 1-2-1 configuration. I think the new design looks very classy and to be honest not far off what you might expect to find in first class. The seat is a customised Collins Aerospace Super Diamond design. The door can be almost fully closed (which is done manually) although there is reportedly a small gap when closed. 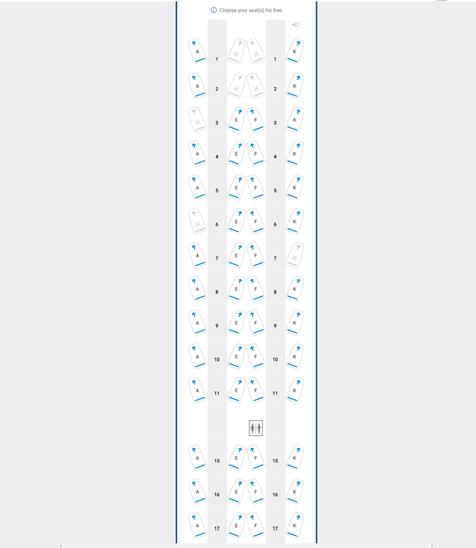 The middle seats have a privacy divider which thankfully can be put up from gate to gate. 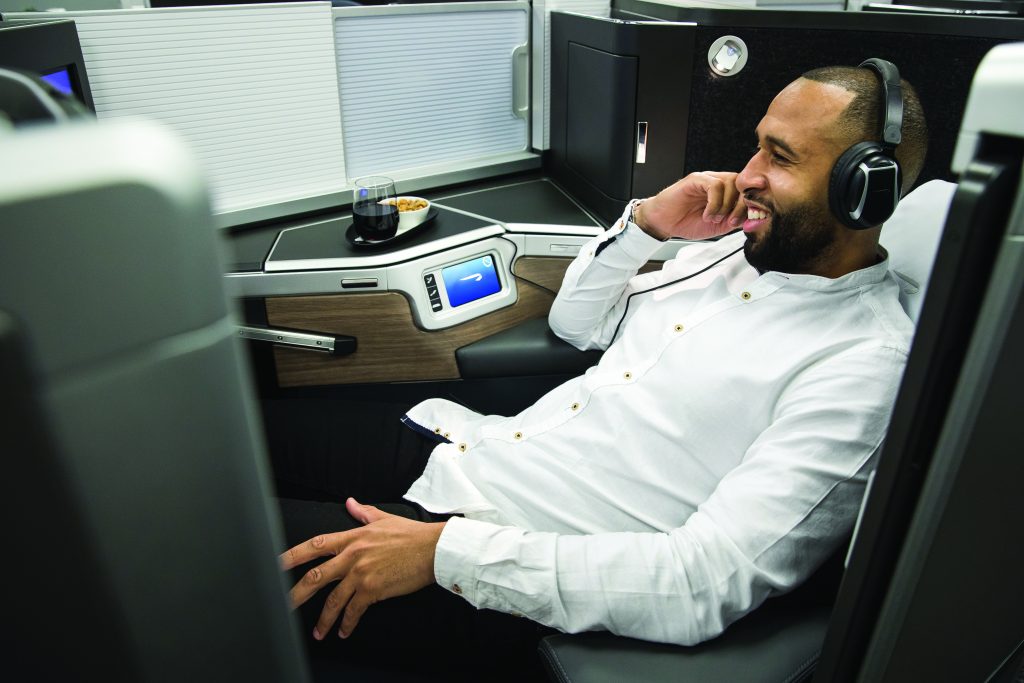 The new seats have 40 per cent more storage, including a vanity unit and mirror, WiFi, 18.5-inch inflight entertainment screens (depending on aircraft type), high definition gate-to-gate programming, and PC / USB power. The new storage space has three storage options. The first is has the vanity unit/mirror. Then there’s a very small one for items such as a mobile phone.  The other bin pops open and has the entertainment handheld remote, power socket and USB outlet. One of my other pet peeves about where to put your water bottle has also been solved with a specially designed area for it.

Another great feature will be that you can store your belongings under the ottoman if they fit which I am really pleased about rather than having to put everything away overhead. The seat is also an inch wider than the current Club World seat being 21″.

The A350 aircraft itself will help combat jet lag and dehydration with reduced noise levels, high ceilings and ambient lighting which is intended to complement the time of day and outside light. You should be able to leave your flight feeling rested thanks to higher levels of humidity and refreshed air as the cabin pressure is equivalent to an altitude of just 6,000 feet. There are also environmental benefits to flying on the state-of the-art A350 as 25 per cent lower fuel burn significantly reduces CO2 emissions.

It is standard practice for aircraft manufacturers to advise an airline 30-days in advance of the specific delivery date of a new aircraft so British Airways will announce the date the A350 will join its fleet in June. The current ‘selling from’ date for A350 long-haul flights is October 1 2019 and it will fly to Toronto. Paul, our Deputy Editor, will be on one of the first long haul flights to Toronto to bring you the full review of the seat on a long haul flight. Before that we will do a review of the aircraft during its short-haul operation. The next destination will be Dubai from 8 October. Note that these both have more than one departure per day so it will only feature on one of them.

As well as a new 56-seat Club World cabin, the three-cabin A350 will feature the latest World Traveller Plus cabin (56 seats) with new furnishings including a plush new pillow and warm quilt, new amenity kits and an enhanced service and an improved dining experience. The World Traveller (economy) cabin offers 219 seats. The aircraft will also be equipped with BA’s hi speed Wi-Fi.

Roll out of seats

During phase one, the first A350 aircraft will start some short-haul flying between London and Madrid to allow the airline’s teams to perfect their customer service delivery and familiarise cabin crew with the aircraft layout. My guess will be this will replace the current B777 once daily service on the route.

In phase two, from October 1, 2019, the aircraft will begin long-haul flying to Toronto. During this period another three A350 aircraft will join the British Airways fleet and two Boeing 777 aircraft will also be retrofitted with the new cabin.

At the start of 2020 phase, three will begin which will see British Airways rolling out its Club Suite on further long-haul aircraft across the network.

Alex Cruz, British Airways’ Chairman and CEO, said: “The arrival of our first A350 featuring our new Club Suite is one of the most exciting developments in our £6.5 billion investment programme.

“Each new suite has direct aisle access and comes with a personal door – design features which were incorporated as a direct result of the feedback we’ve had from our customers. We’ve worked hard to ensure every aspect of the Club World experience from the lounges we’ve refreshed, to the new gourmet menus from Do&Co on flights from Heathrow, and the luxurious bedding we’ve introduced from The White Company exudes the very British style and quality customers expect from us.

“At British Airways we have one of Europe’s largest long-haul fleets and most far-reaching global networks, so it will take some time to make the cabin available to everybody. We hope that as more customers have the chance to experience it, they’ll enjoy travelling in it as much as we’ve enjoyed designing it.”