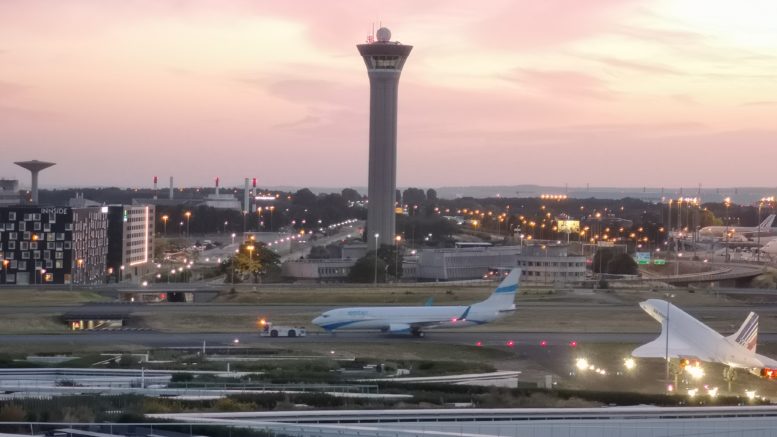 Today’s review is by reader David. If you would like to share your travel experience with TLFL readers, drop us an email at [email protected]

When having an overnight stay at Paris Charles de Gaulle, there are a large number of hotel options. You can stay airside at the Yotel CDG, landside at Terminal 2 in the Sheraton CDG, there are also a number of hotels around the area of Roissy from the low-cost Ibis Budget all the way up to the Pullman. However, for a mixture of both cost, quality and most importantly views the Hilton Paris Charles de Gaulle wins hands down.

This stay was planned after our flights back to Edinburgh (see the review of the way out here) were changed from the afternoon to mid-morning and wanting to avoid early morning Paris traffic out to Charles de Gaulle airport. We opted for a King Executive Room Plus Newly Renovated which were all renovated in 2019, at the cost of €172.96 for the night. Using the Hilton app we were able to select the room the day prior to our stay and selected room 811 which is North facing and has windows which wrap at the corner, we also stayed in this room last November on an overnight to the Caribbean. The pictures will speak for themselves as to why we selected it.

On arrival, having taken the CDGVAL from terminal 2 to the Roissypole bus and train terminal we took the short 5 minute walk across the plaza into the hotel entrance, which had one door open for entering and a separate door for exiting the hotel lobby either side of the revolving doors which were out of operation. A couple of minutes wait whilst the gentleman, and then the couple were served at the one open desk and I was welcomed to the hotel and checked-in quickly. The receptionist advised the Executive Lounge was open, but only for making hot drinks at the coffee machine, though we would be allowed to sit in there if we so wished. Due to the lack of Happy Hour in the Lounge, we were advised we could take a free drink of beer, wine or a soft drink in the Skylight Bar with a voucher supplied. Before we left, we were given details of breakfast which was to be taken in the breakfast room from 7am until 11am. Then we received our key cards, although you could use the Digital Key if you so wished through the Hilton app, and we were on our way.

A short walk across the lobby and keeping to the left-hand side brings you to the three internal lifts. For those who have issues with vertigo, I may suggest asking for a lower floor in order that you may be able to use the stairs as the lifts have open views over the hotel and the Southern section of the airport. Once we reached the 8th Floor we stepped out into the lobby area with sofas and chairs available for relaxing whilst awaiting a lift, or for general waiting whilst others are getting ready on different rooms. The walk down the wide corridors took us past the ice machine and out to the far end of one of the wings. Considering Hilton are promoting their CleanStay program with the doors sealed by a sticker across the door so you knew no-one had entered since it had been clean, we were slightly surprised to see no stickers on any of the doors we passed during the stay. 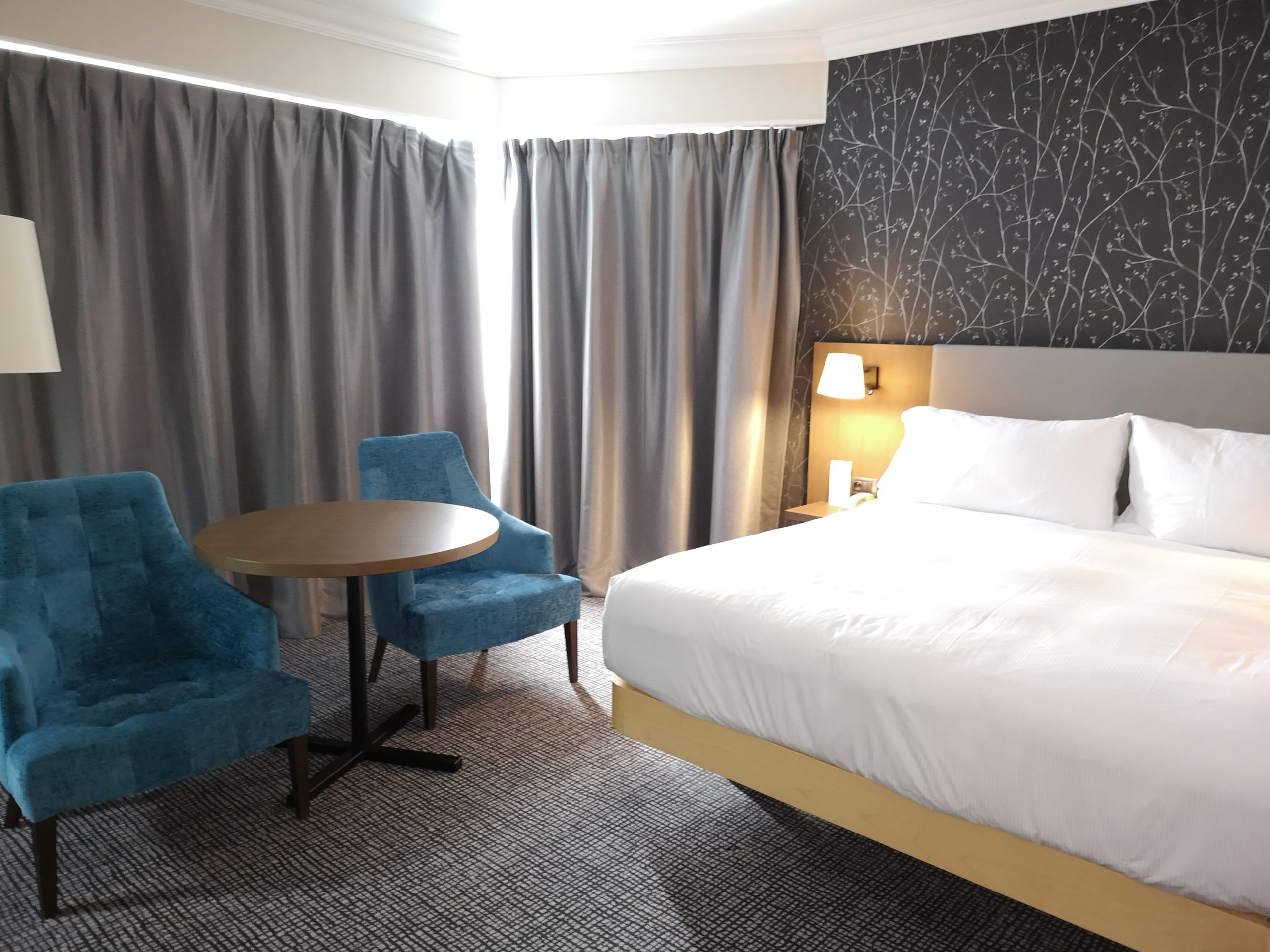 We opened the room and walked into a wide-open space with the bathroom to the right and the wardrobe with cupboard space to the immediate left. Further in is a very open view to the remainder of the bedroom with the desk in the far-left corner, two comfortable high back armchairs with a table and the King Bed around to the right. 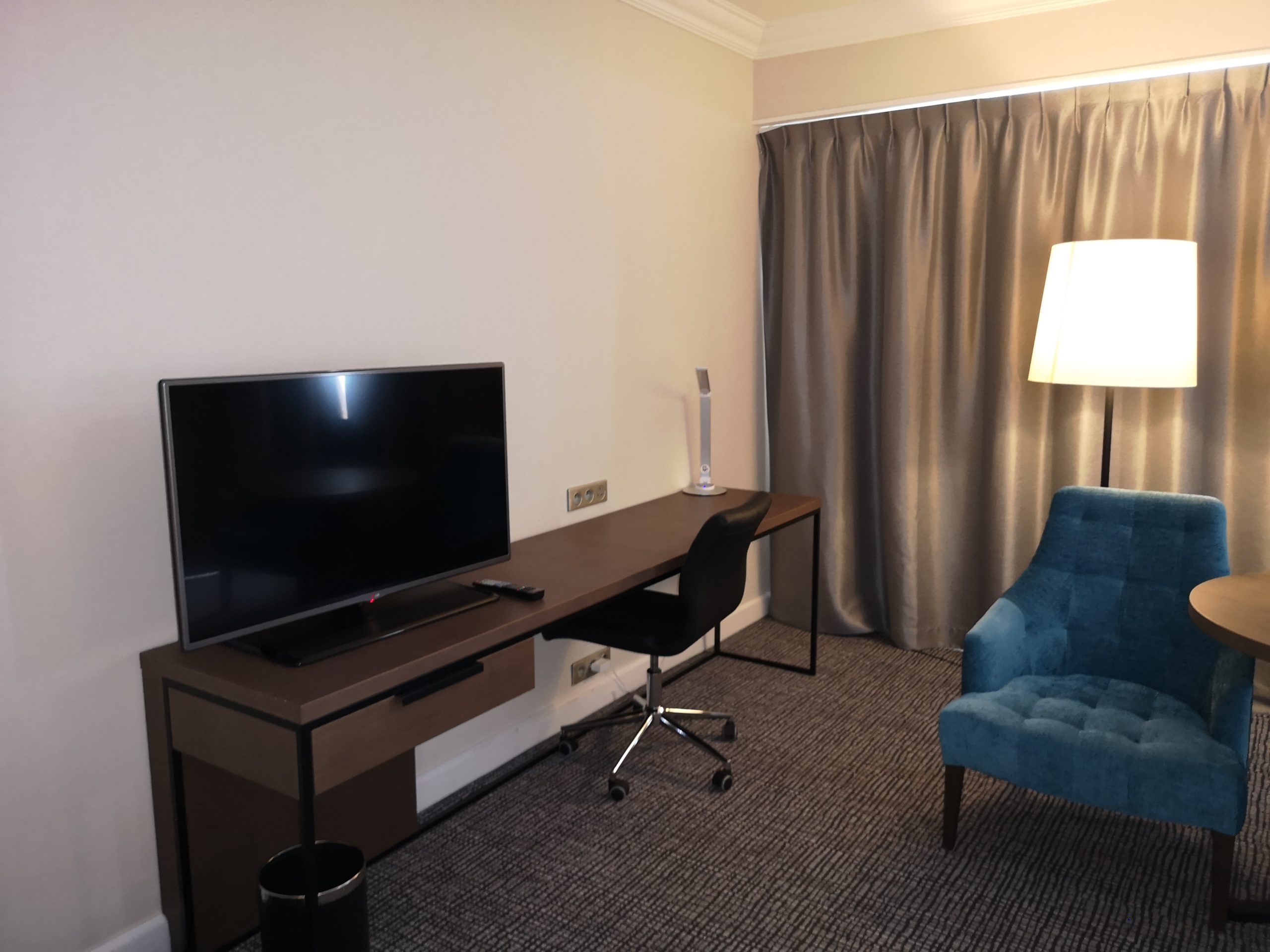 However, it is upon opening the curtains that anyone who enjoys aeroplanes or flying, in general, will love not just this hotel, but this particular room. 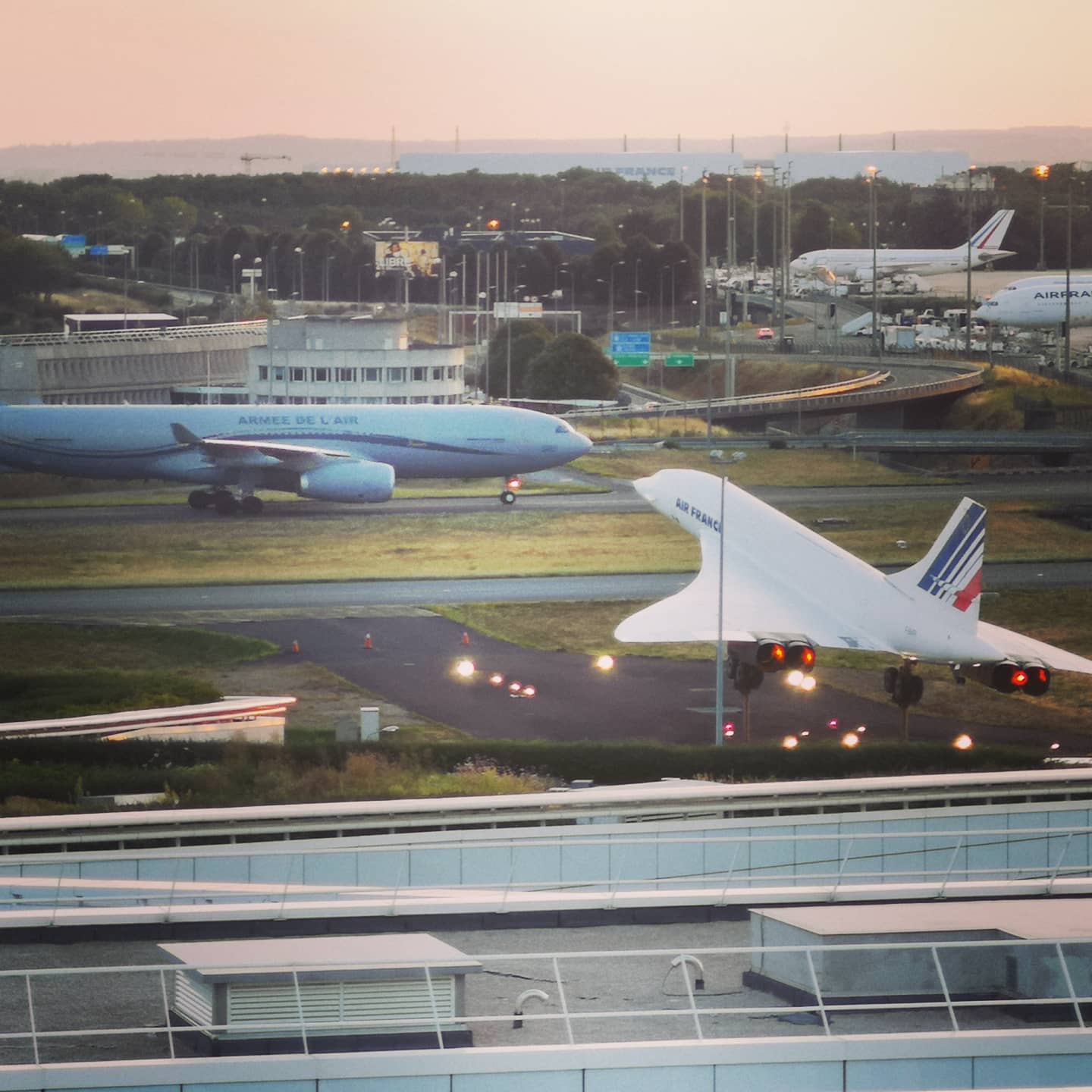 There is a panoramic view across the North and Western complex of CDG, which includes a view from the rear of one of Air France’s retired Concorde jets. The Concrete brutalist Terminal 1 is in front and to the right, with the small Terminal 3 below your eyeline on the right-hand side. This terminal was currently occupied by a mixture of aircraft currently parked by Air France whilst flight operations are quiet. 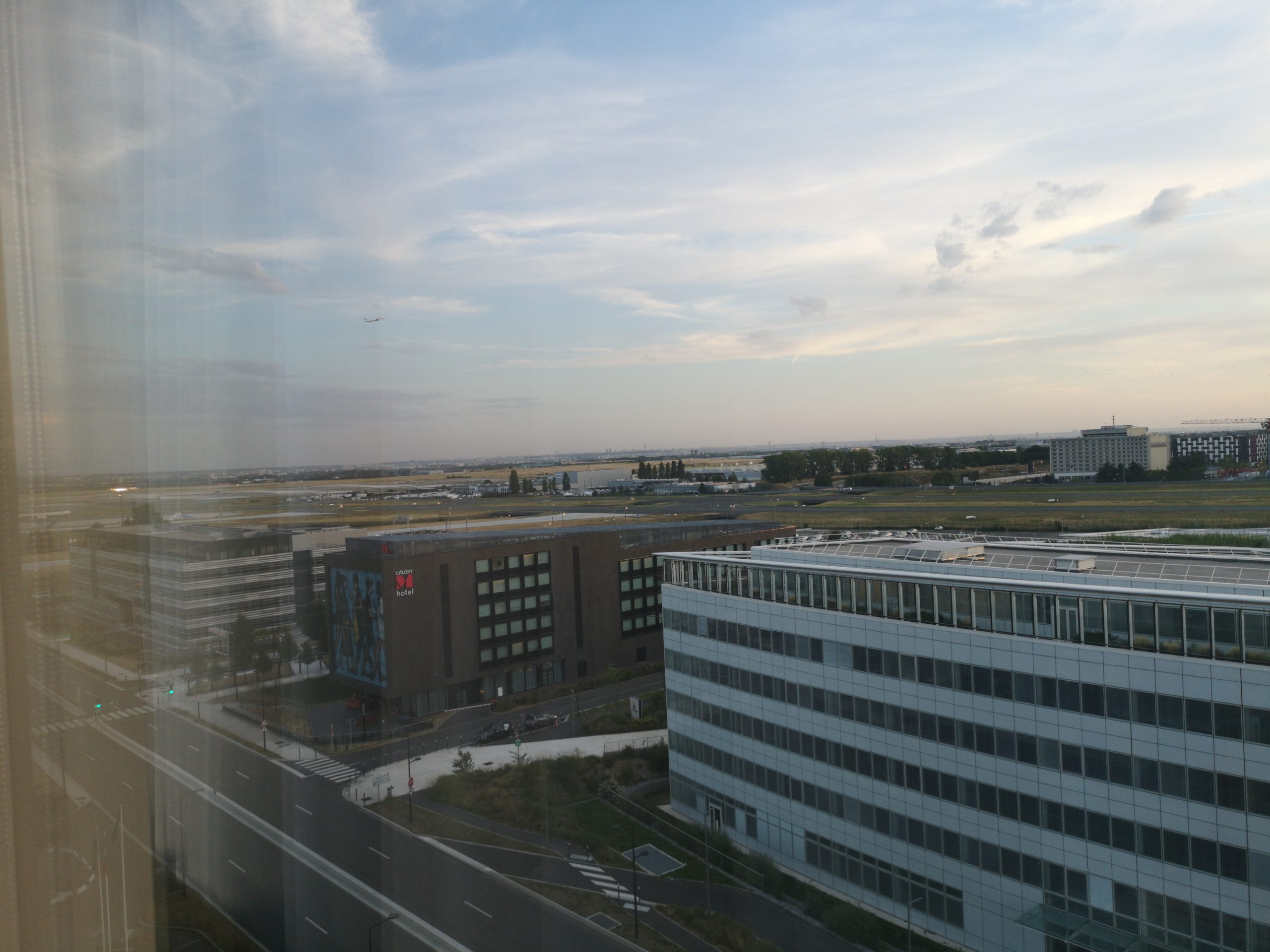 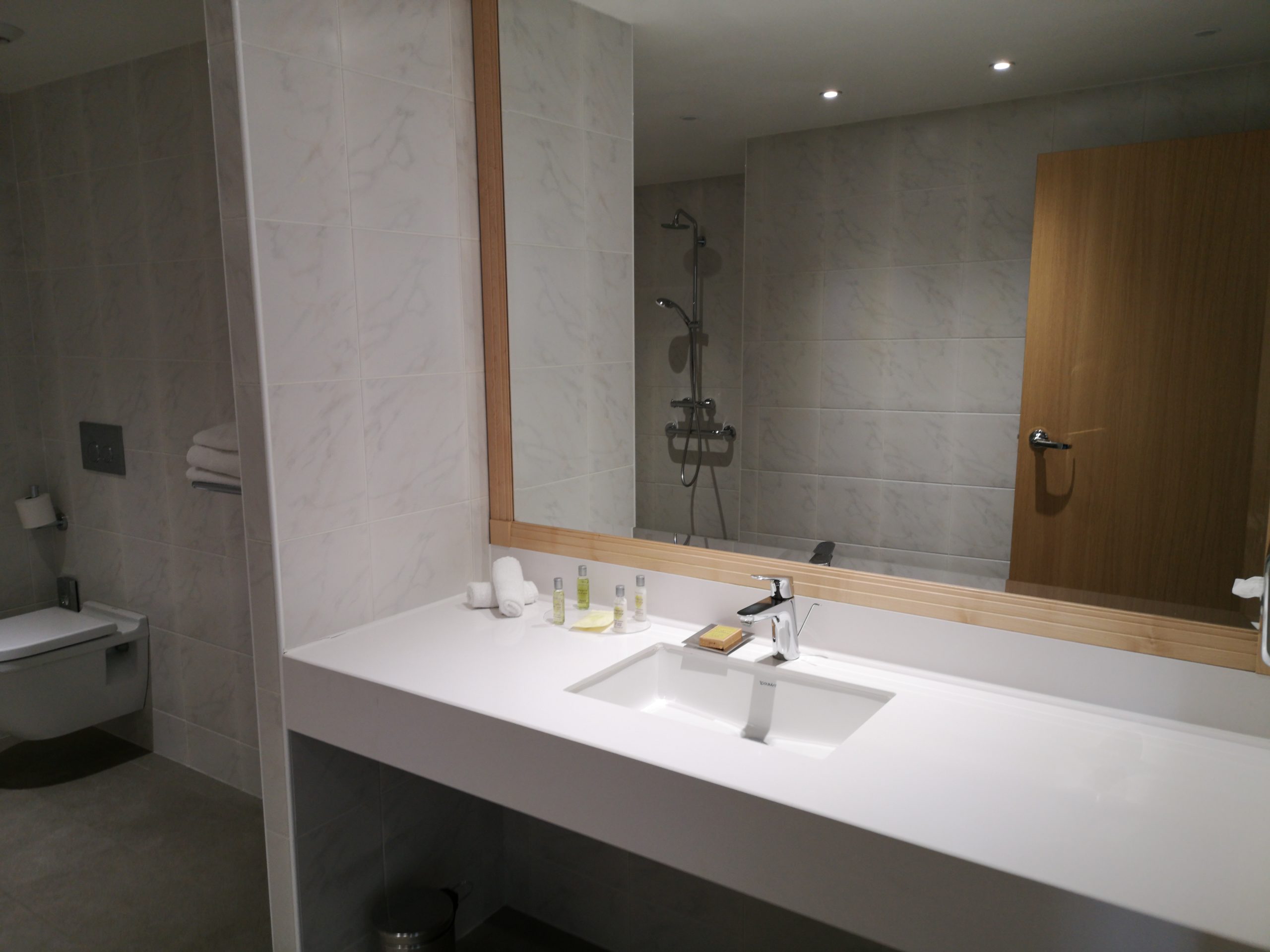 The bathroom is for those who require an accessible room. It is a full wet room with a shower, toilet and sink. The Crabtree and Evelyn products were set out with two face cloths, and the towels were on a rack next to the toilet. If you really like a bath then you will be disappointed, though the shower has excellent pressure and the floor dries exceptionally quickly. 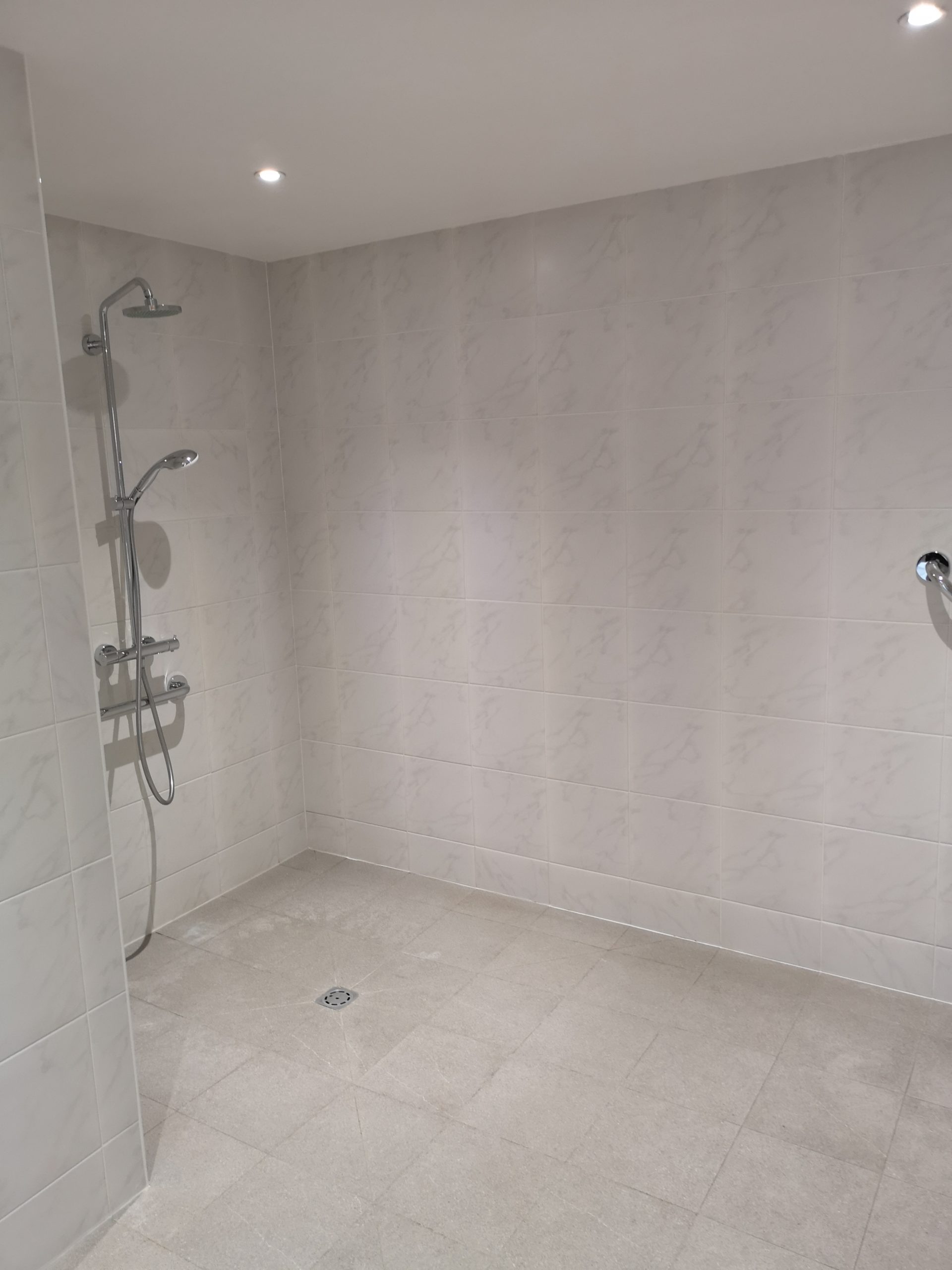 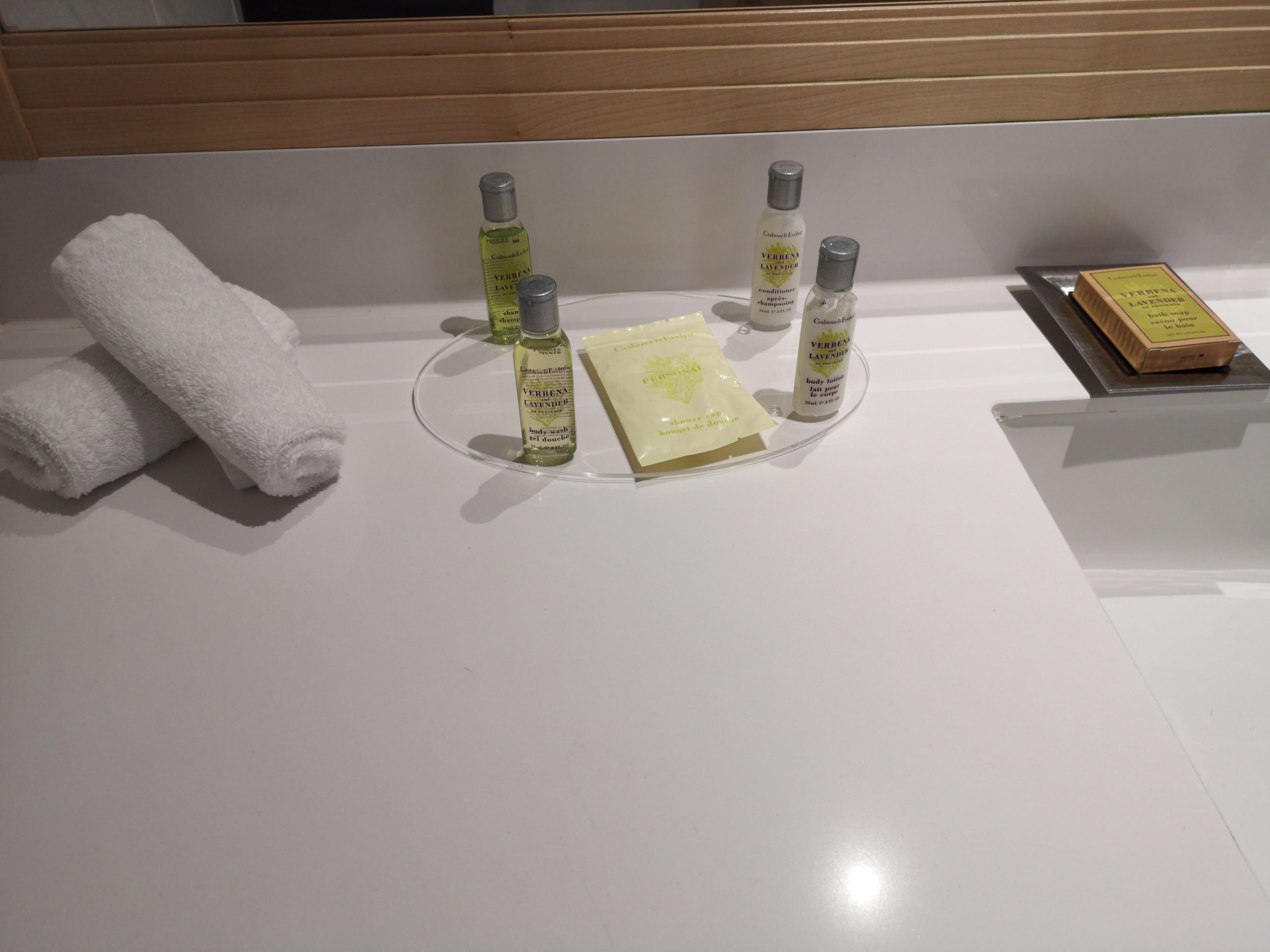 The safe is in the wardrobe at the base  of the left-hand side and will fit a 15” laptop comfortably, it also has a cubby hole on which you can place your valuables plus plenty of room for any other items you want to keep stored and locked away. On the other side were the bathrobes including the slippers, as well as the iron and ironing board. Above the cupboards were two bottles of still water and the back of the shelf stood a mirror. Underneath the minibar was empty and switched off. 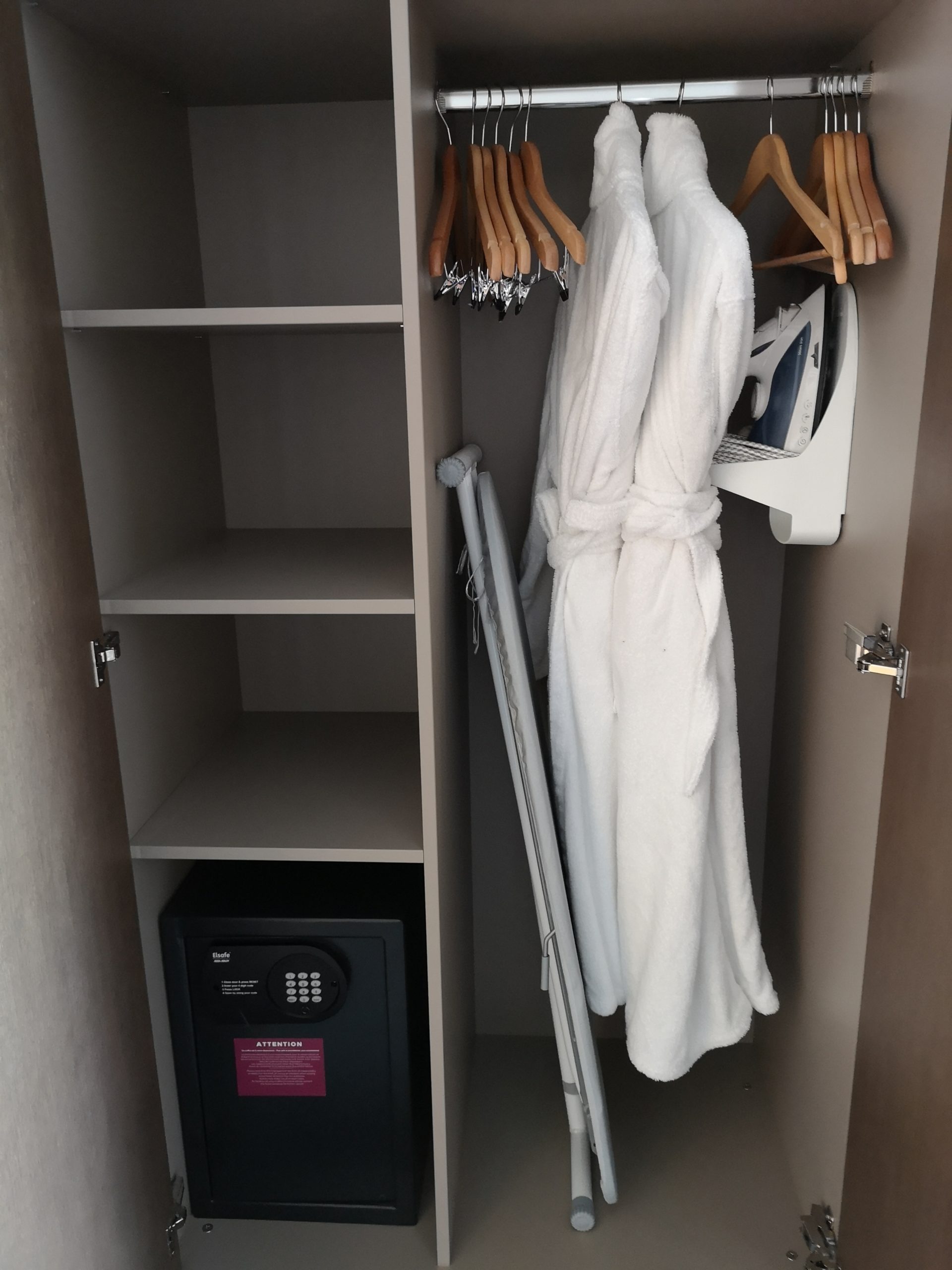 Once we had unpacked what we needed for the morning, we headed back downstairs to the lobby, to grab a coffee in the Executive Lounge. The keys opened the door and we walked around to the right to the coffee machine, collected a paper cup and selected the drink we wanted. Hot water was available from the machine with a selection of teas. If you wanted milk or sugar, they were available as individual sachets, and the milk was really coffee creamer though it was serviceable in a cup of tea. We took a seat in the lounge whilst relaxing in front of one of the two televisions to watch the news about Nantes Cathedral before taking a look at the menu in the bar. 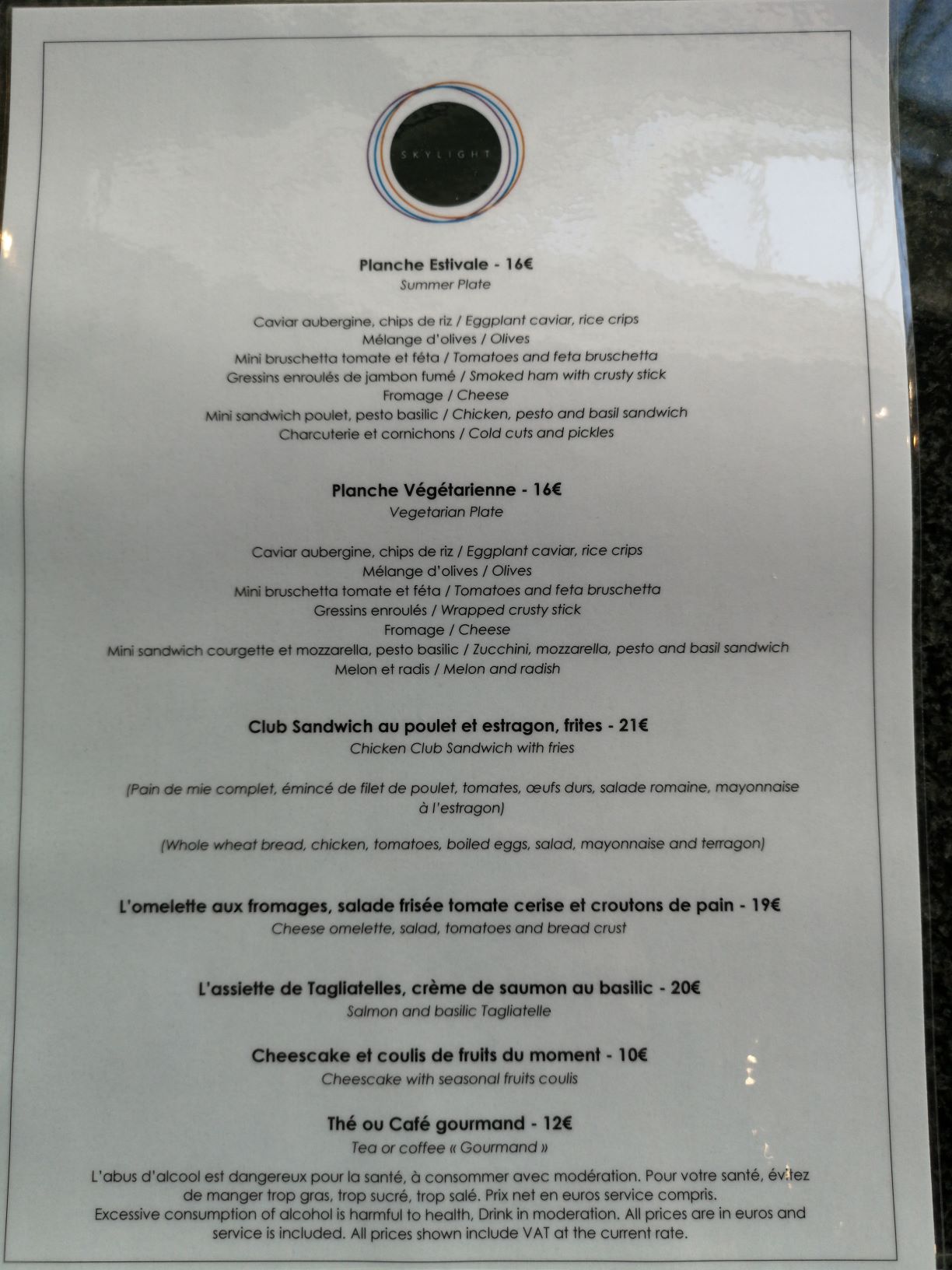 The Skylight Bar is the bar and restaurant currently due to the present situation and there is a limited menu with two different platters (one for meat and one for vegetarians) a club sandwich, cheese omelette, and salmon tagliatelle. Having seen the cheese omelette and tagliatelle, we decided to pass and go for a walk, ending up back at Terminal 2F and in McDonalds.

On our return, I went up to the bar and waited a couple of minutes for service. I asked which drinks were available and there were only two beers in the fridges one of which (St Rieul) was not on the menu plus Desperados, a Chardonnay or Sauvignon Blanc were the white wine options. They also were down to one red wine which was the Saumur Champigny from the Anjou region. I ordered two glasses of the Sauvignon Blanc and paid for a beer separately. The wine was drinkable, but not of a great taste but something you could relax with. The St Rieul from the Picardie region had a nice cereal and citrus flavour which was good to sit and relax with whilst chatting away. 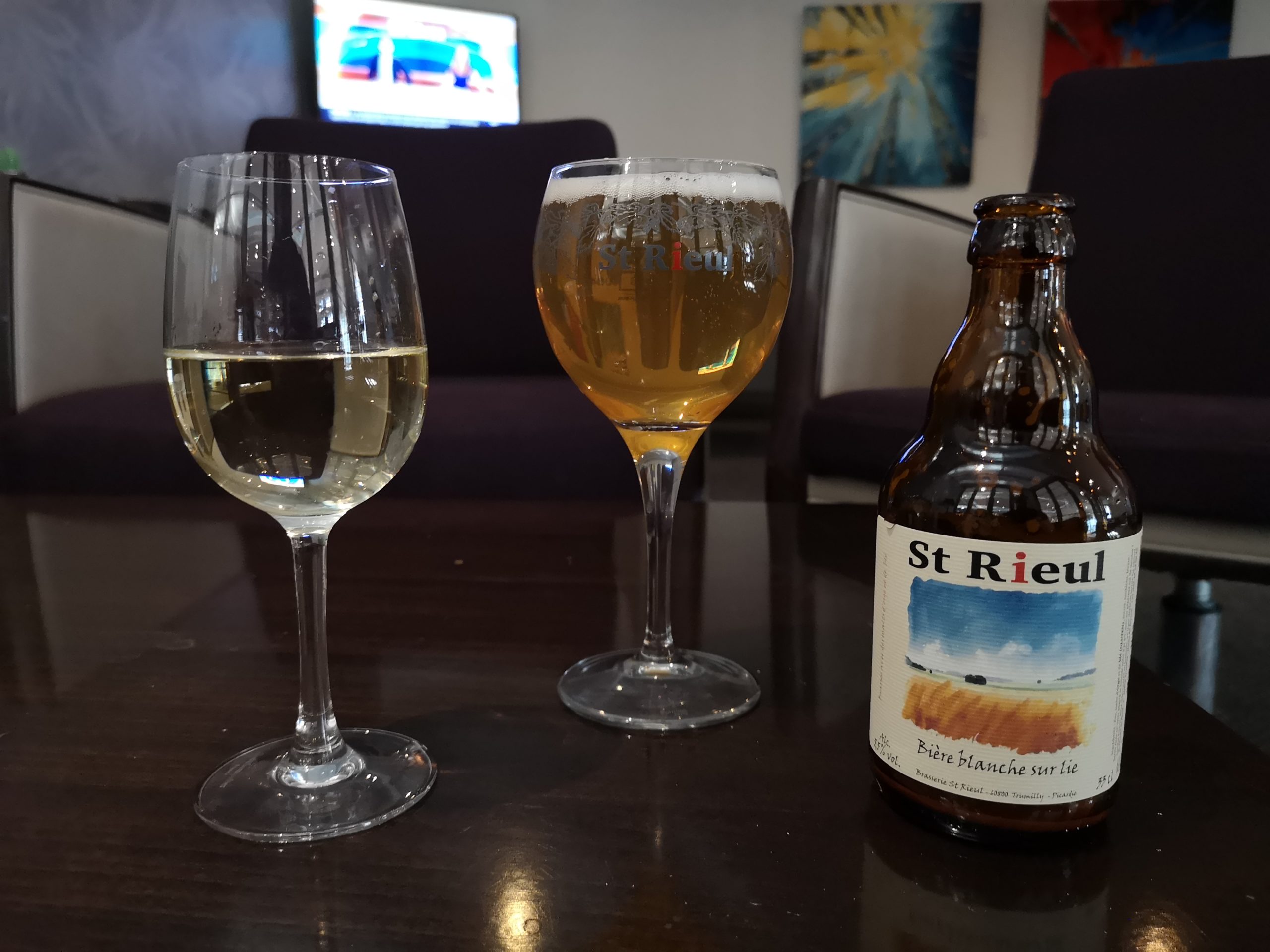 Upon finishing our drinks, we took two hot drinks from the Lounge back upstairs and started to look out over the airport again as the sun set over La Défense and the airport came to slumber. Still we managed to see a French Military A330 which taxied past our room to park over at Terminal 1, as well as an Emirates Boeing 777 taking off to head back to Dubai. We even watched the Eiffel Tower beam of light rotate round brightly.

Once we became too tired, we closed the blackout curtains and fell asleep on the huge and comfortable bed. Either we were too tired or rather comfortable as we did not awaken until our alarms sounded at 7am.

Having had a shower and got dressed, a short stroll to the lift to take us down to the breakfast room in the Skylight Restaurant area was taken. We were advised by the host to take any table and we realised, that other than the really quiet nature of breakfast was the hotel was operating a buffet still. The only hot food was scrambled egg, and the rest of the selection from the cold meats, croissants, fruit, cereals and yoghurt were pretty standard fare. 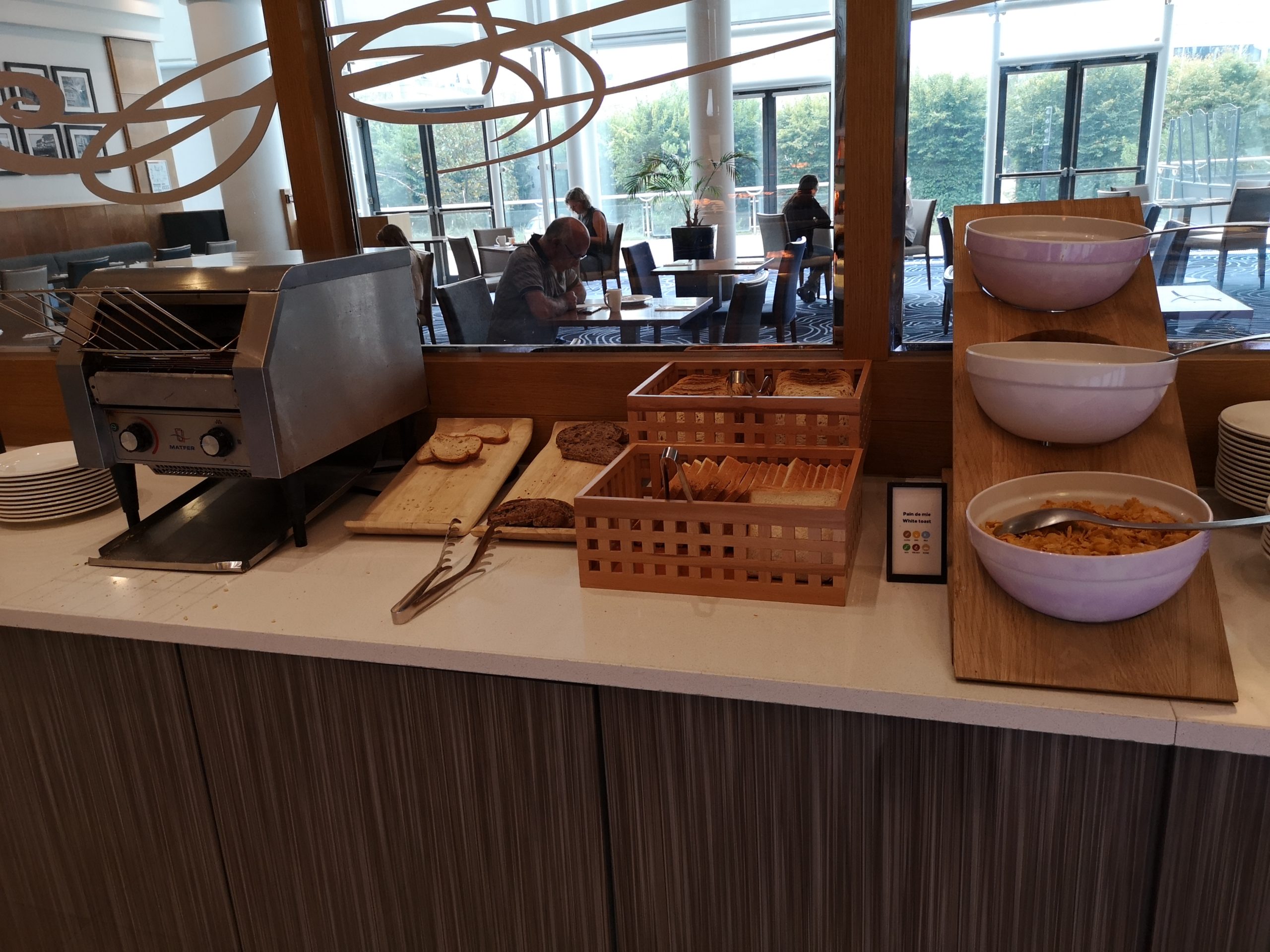 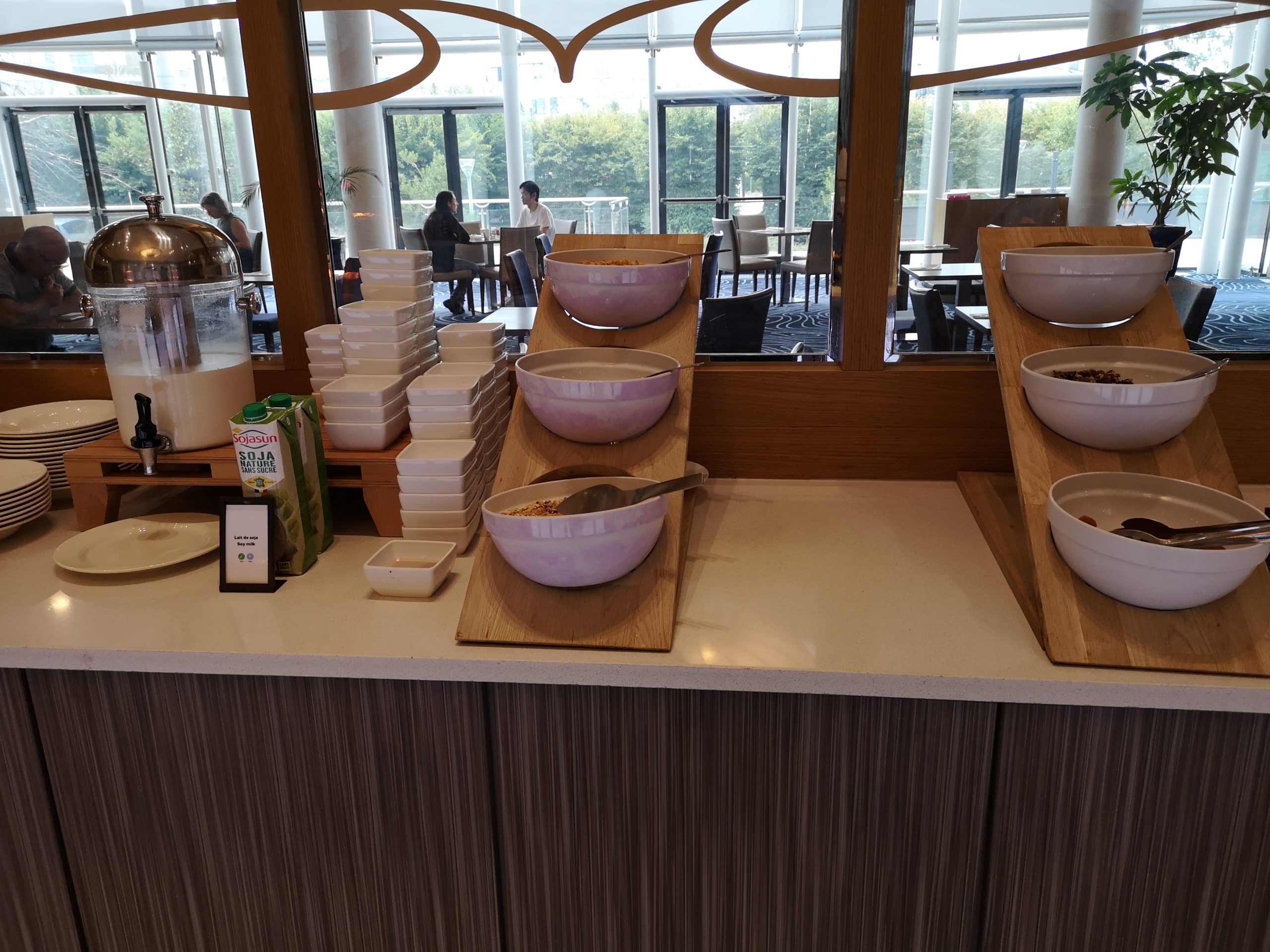 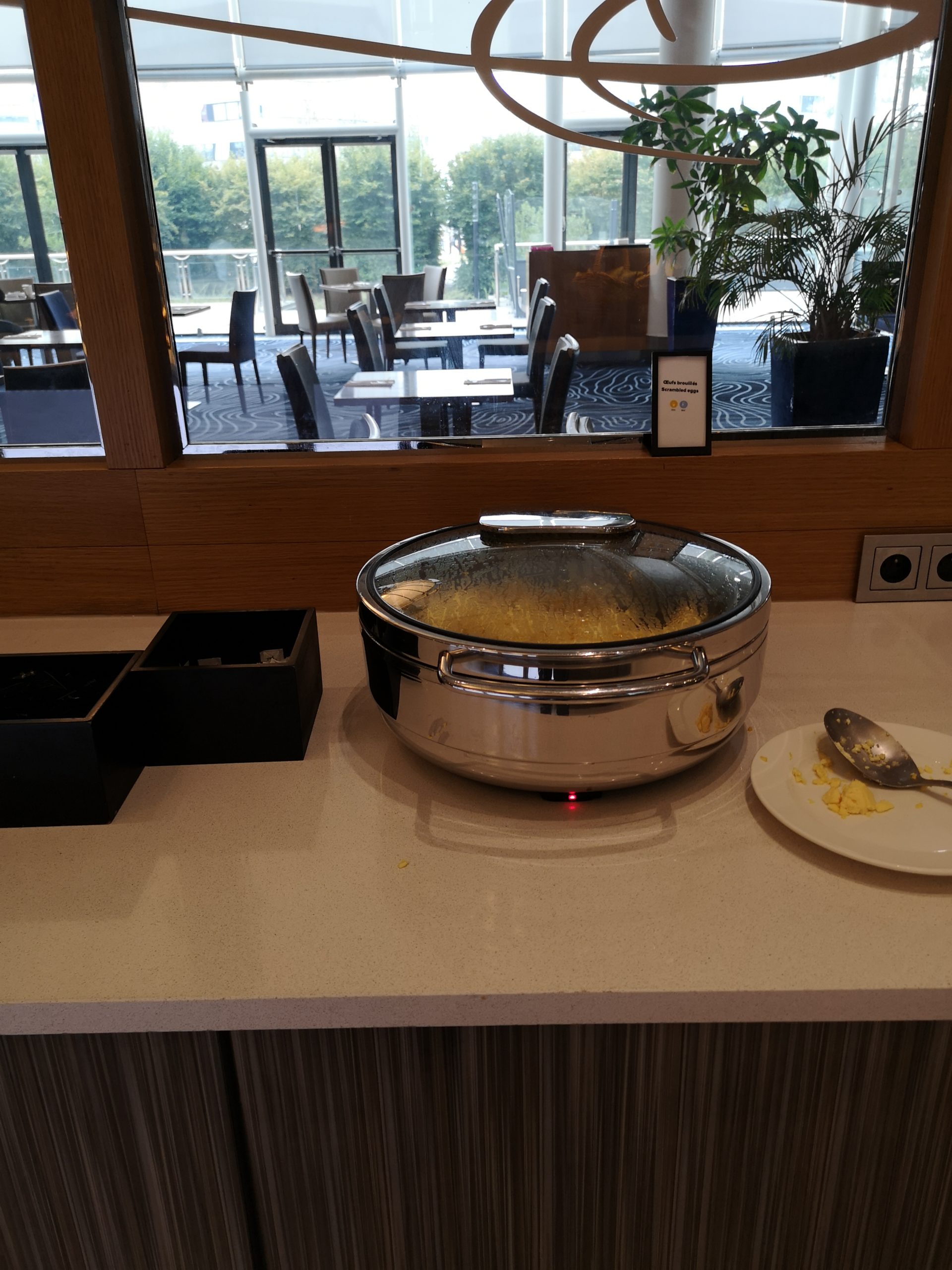 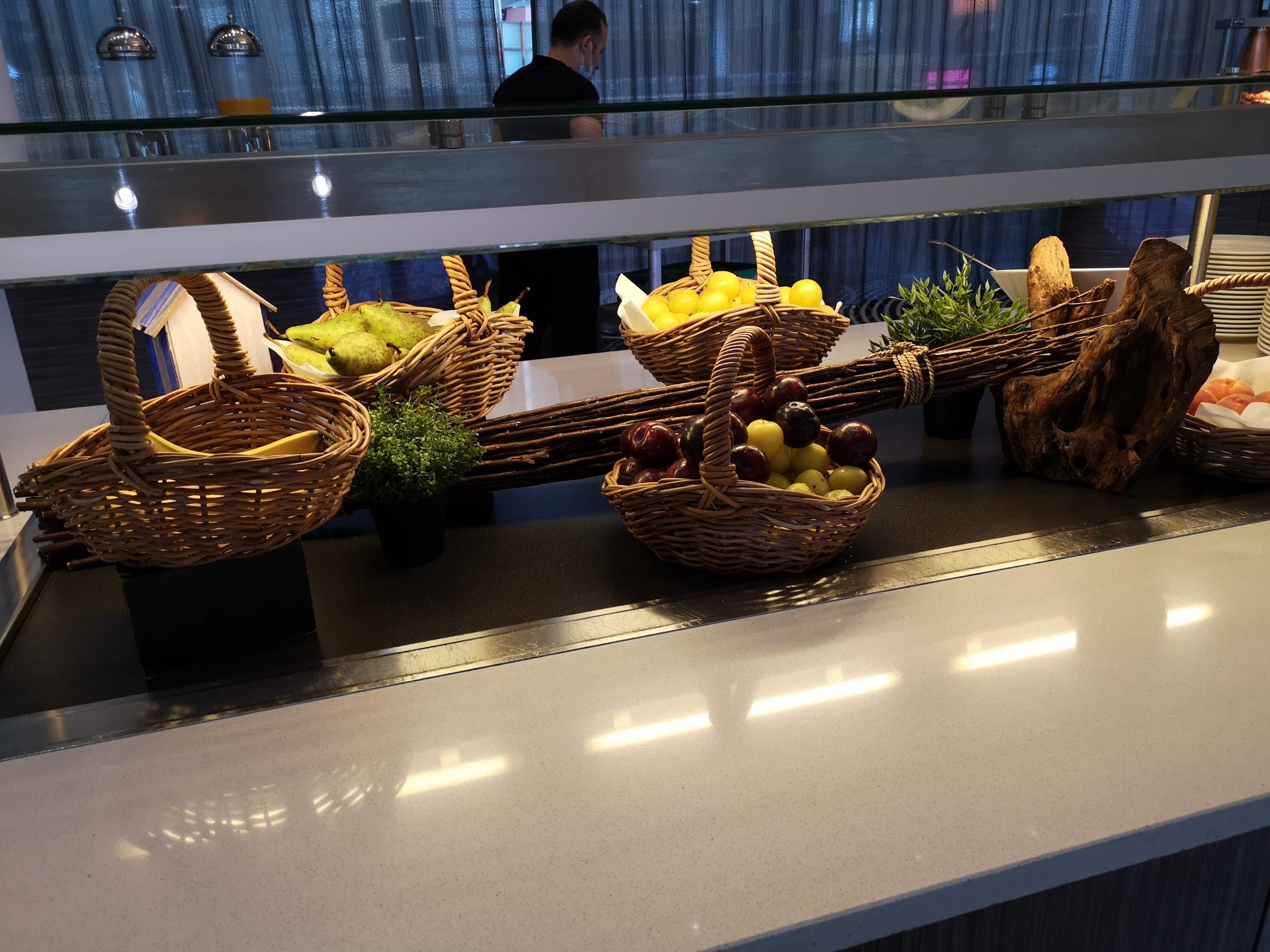 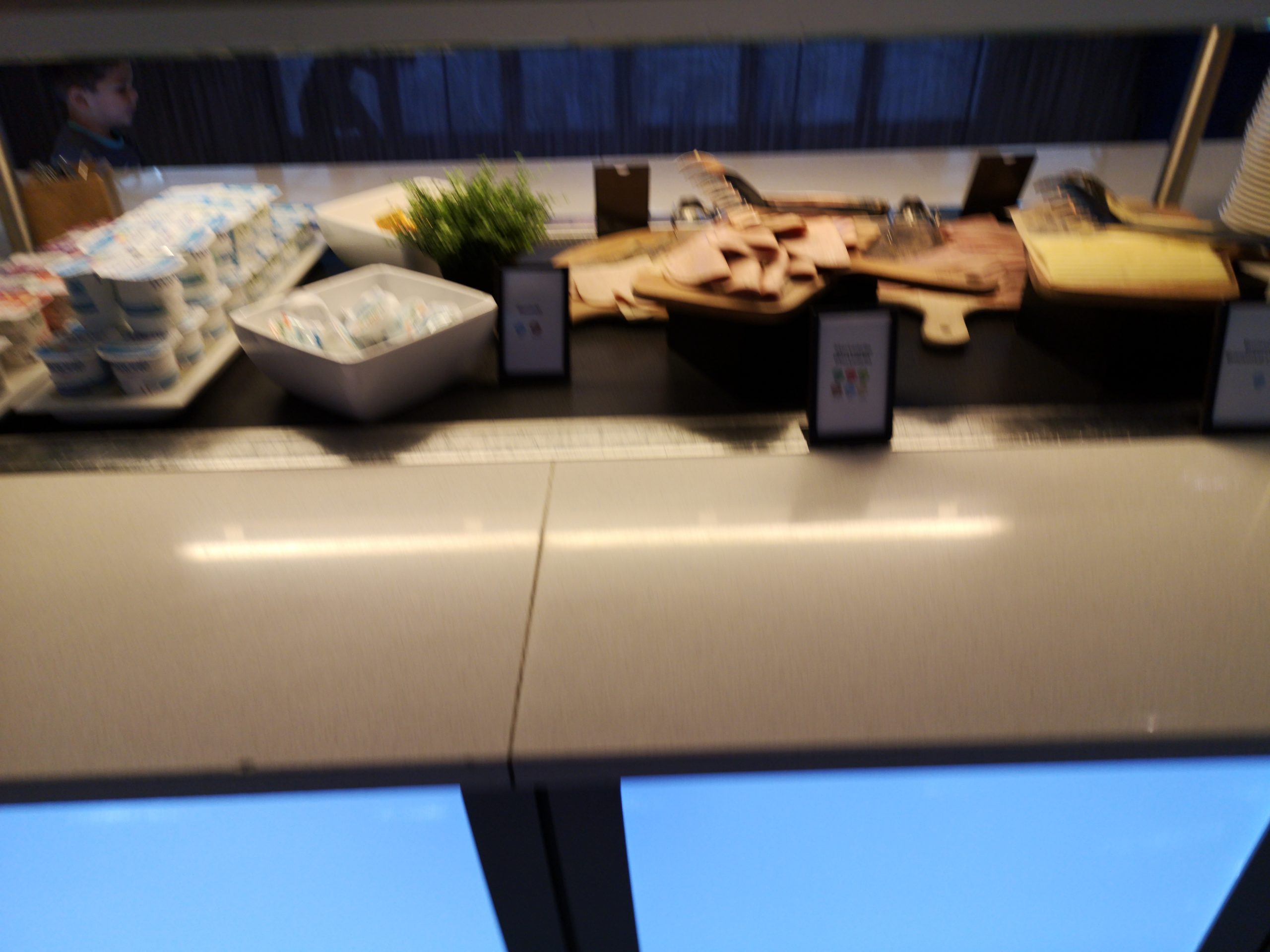 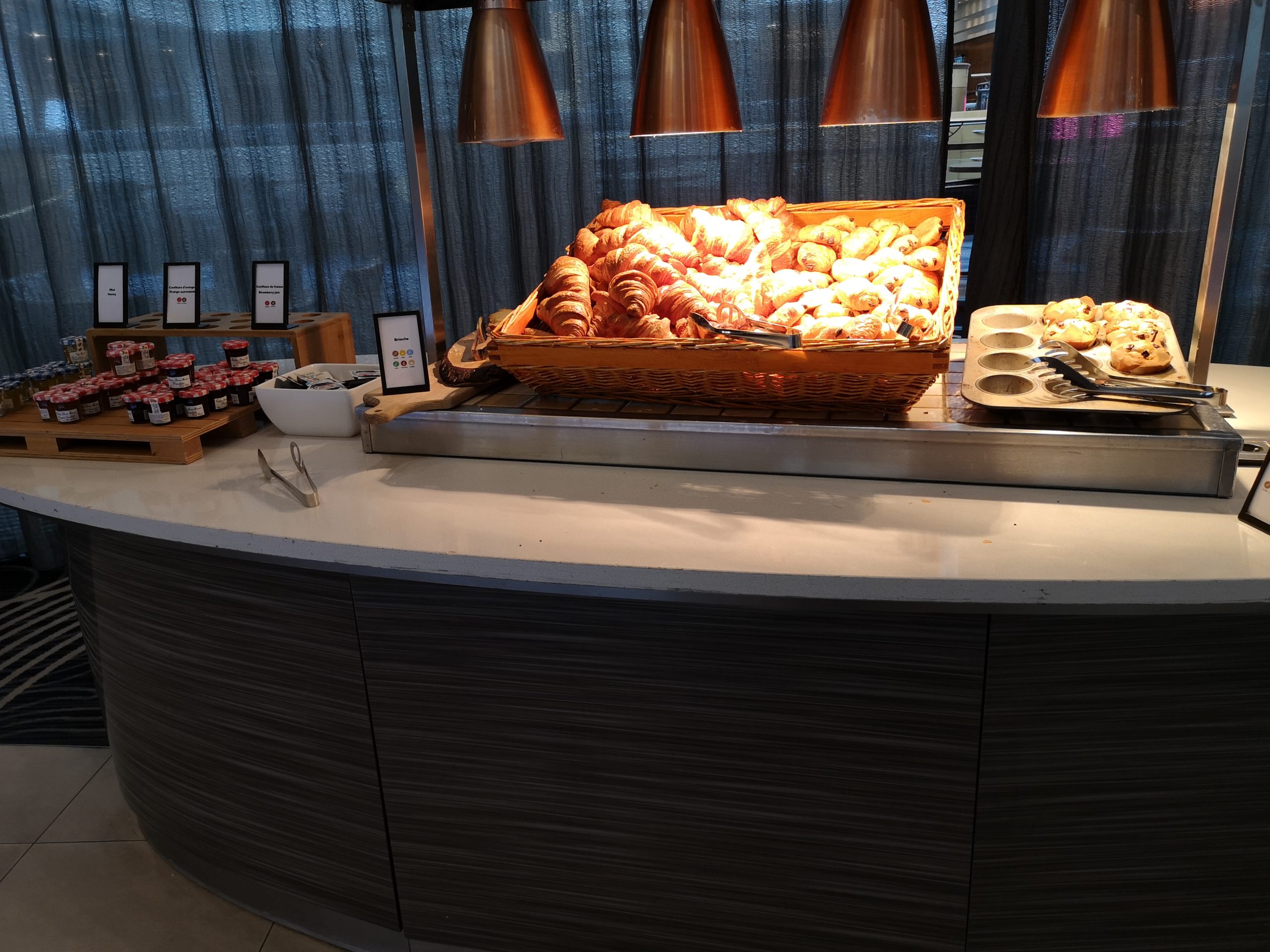 We went back to the room and watched some of the transatlantic flights arrive including the Air Tahiti Nui Dreamliner land on the Northern runway, then taxi past us to head to Terminal 2A. 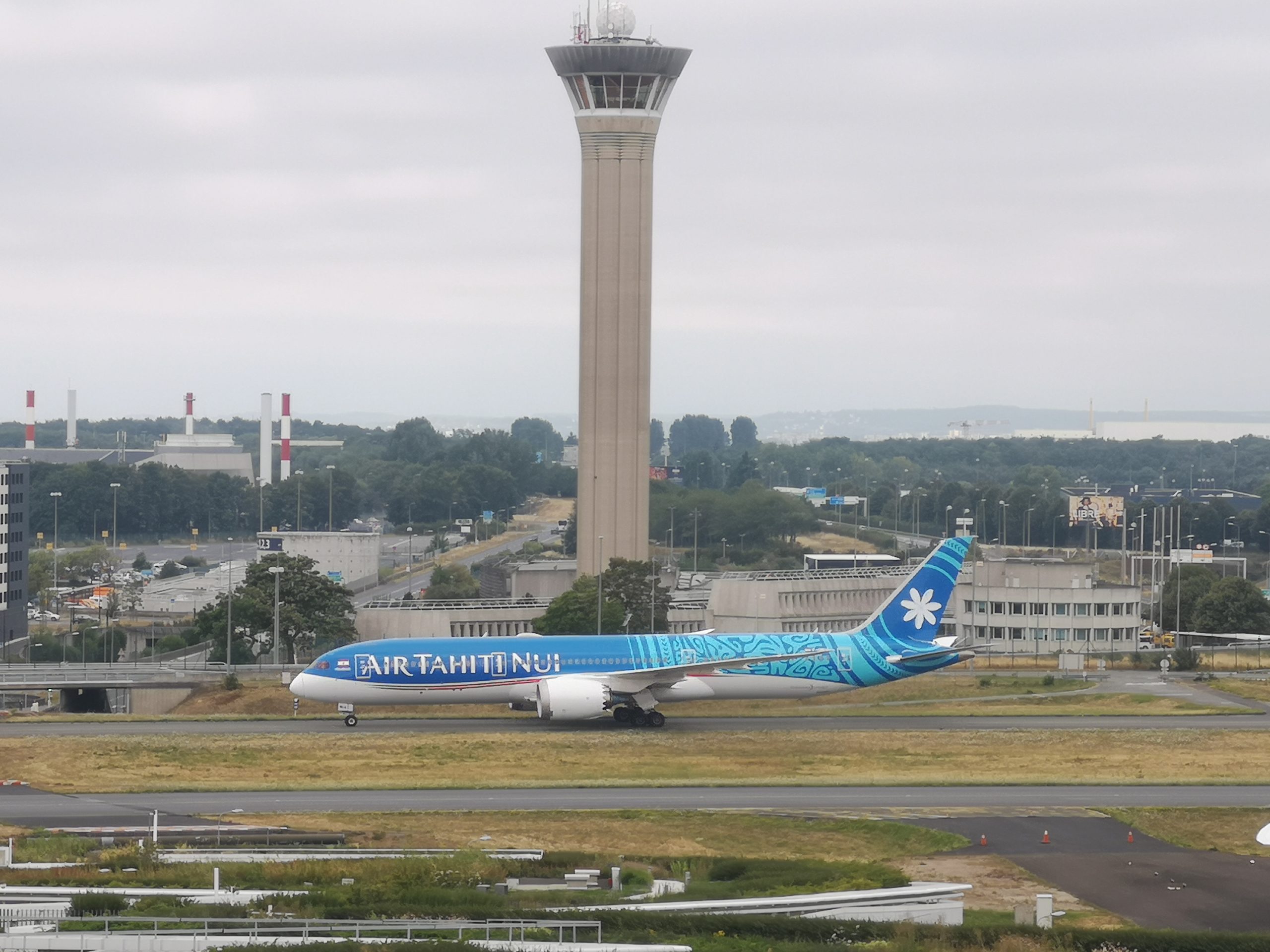 Checking out was a breeze with the two desks open, and the bill was settled very quickly. On leaving, a comment from the receptionist rang true, people ring up and email to ask for room 811 simply because the views are spectacular, and with a touch of polish to the bar offering it would be a truly spectacular airport hotel all round.

You can find further information on the Hilton Charles De Gaulle here.