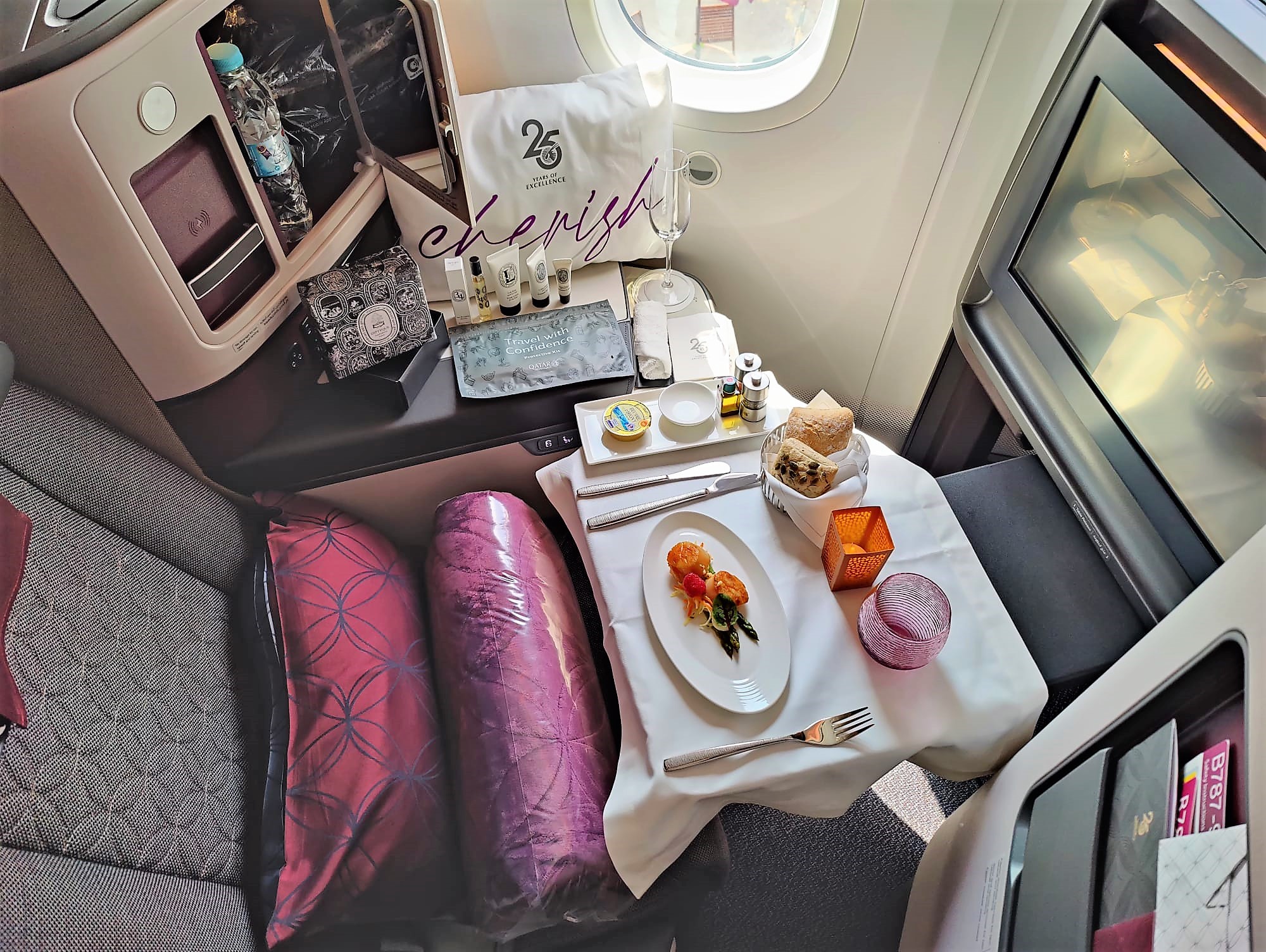 Last year Qatar launched a new business class suite for its B787s. The wonderful QSuite, unfortunately, does not fit the fuselage properly, so they have gone for a new suite design. The suite was originally called the Business class Suite but dubbed QSuite Lite. It has now been renamed as the Premium Suite.

I was at the Farnborough Air show yesterday, so I got to see the suite in person and try it out. 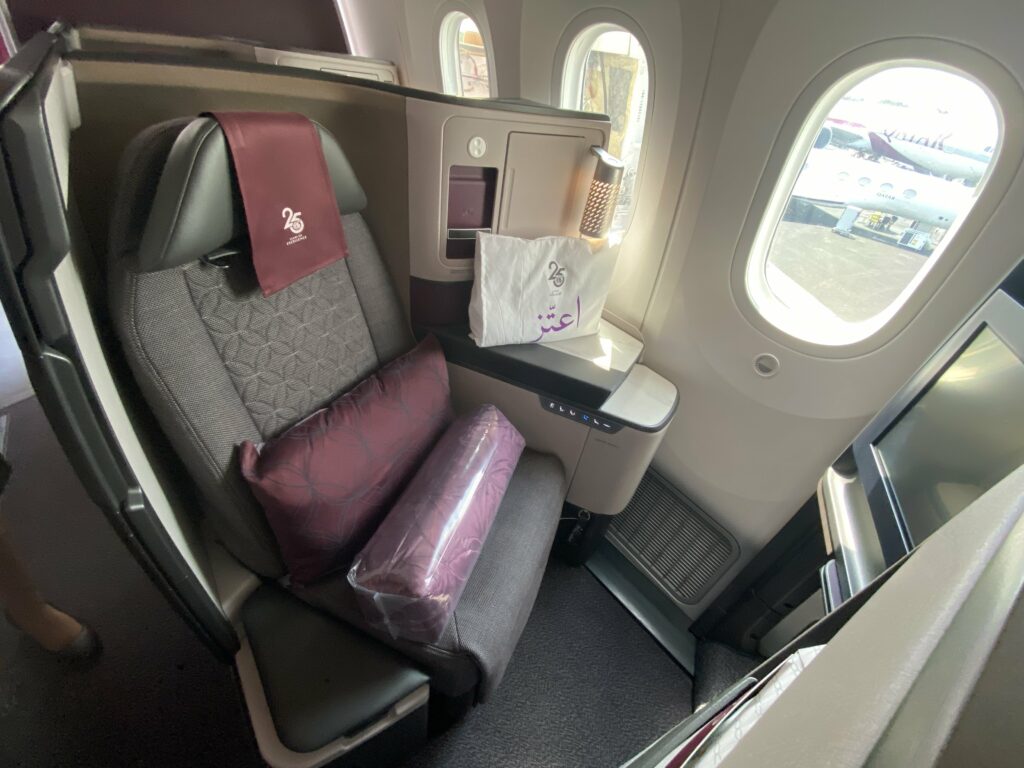 Unlike the original QSuites which face forwards and backwards in an alternating pattern, the Premium Suite as it is known is arranged in a herringbone pattern, in a 1-2-1 configuration. 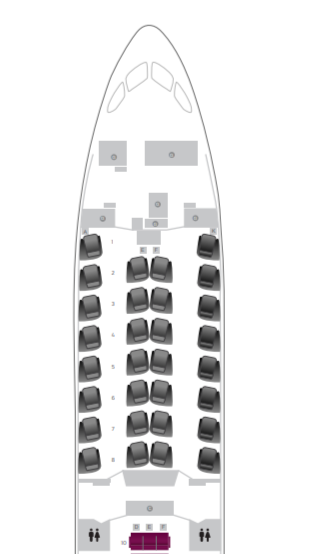 There are 30 Suites on a B787-9. As you would expect, each suite has direct aisle access with a sliding door to ensure extra privacy.

The centre seats can be arranged with the privacy divider up or down. However, there is no way to make the double bed like on the QSuite, and you can’t have the Quad arrangement either.

The interesting part about the divider that I have not seen before is that both people have to press the divider button to work, which I like. If you’ve had an argument with your other half or your travel companion is irritating you, you can just keep the screen up!

The business class suite, transforms into a 79” fully-flat bed, and the arm rest can be completely stowed away if you wish, giving more available width for sleeping. There are three preset positions for the seat – bed, landing/take-off and relaxed, but you can also raise or lower the leg rest separately.

In terms of technology, the Suite is well equipped. There is a 13-inch Panasonic IFE touch screen which feels large in relation to the position of the seat. You can control the TV via its touchscreen or you can use the separate handheld controller that allows you to have something separate on the screen, such as the moving map. 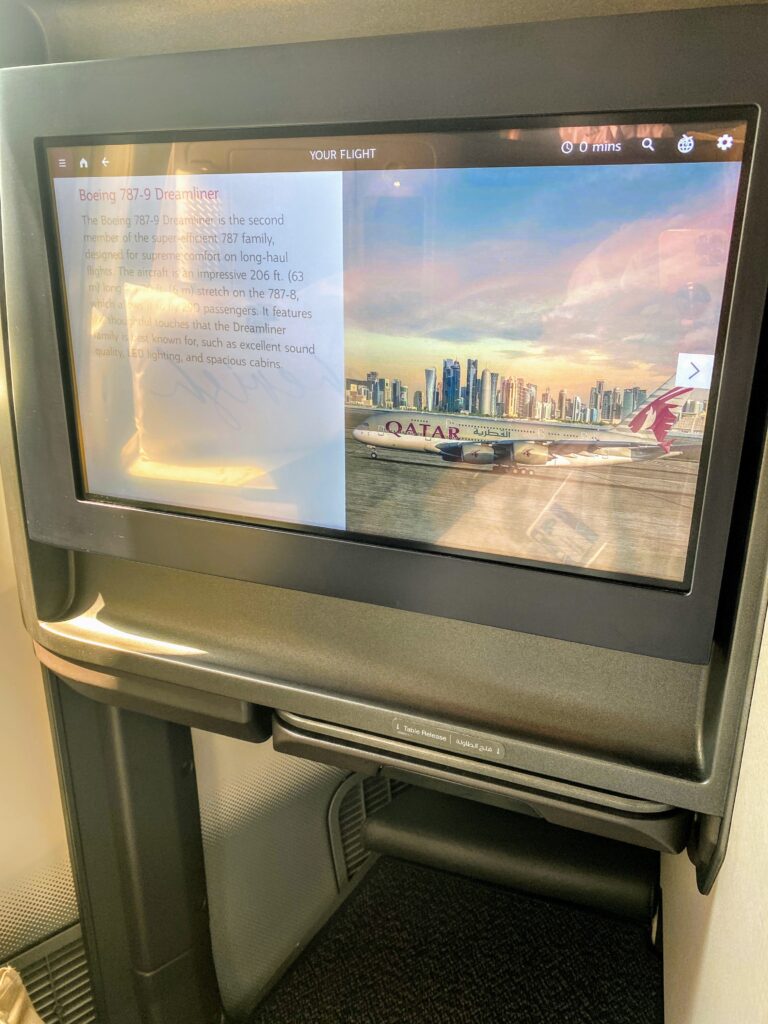 I really liked the personal electronic device holder for mobiles which allows wireless charging but keeps your phone safely out of the way so it doesn’t get lost. There is no HDMI connector like some QSuites on the B777, but it does have a USB port as well as a multi-country socket. 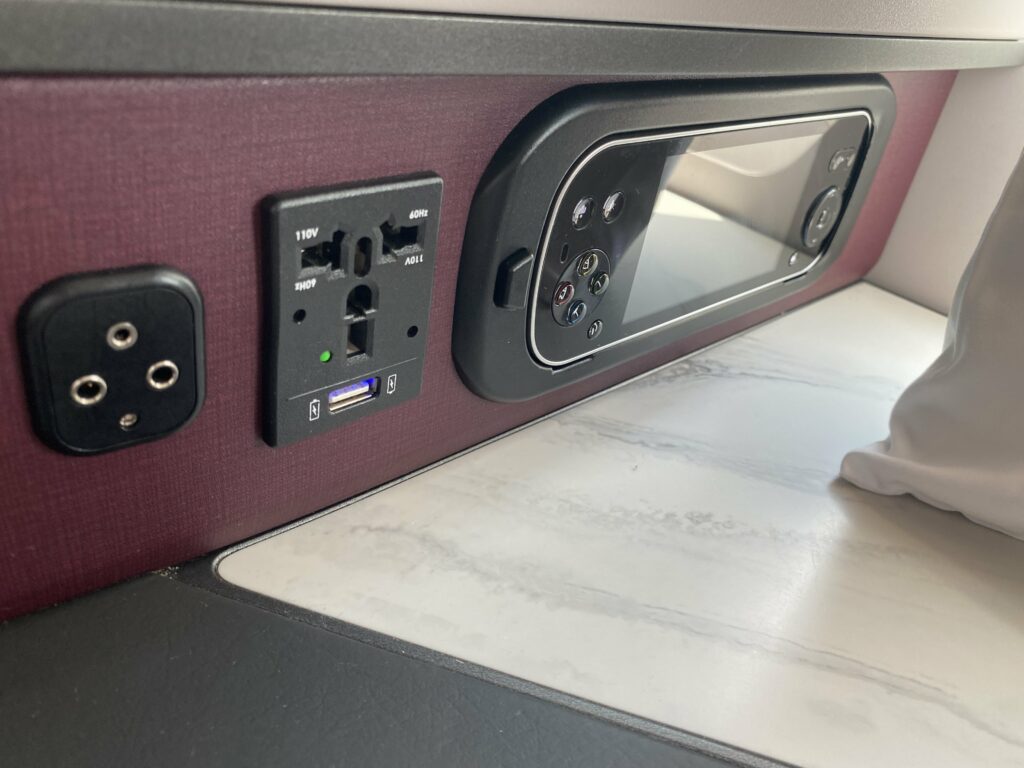 There are plenty of lights with an LED reading light above shoulder level, along with an attractive lattice light which you can choose to have at three different brightness settings. Plus there is the usual overhead light for maximum brightness. 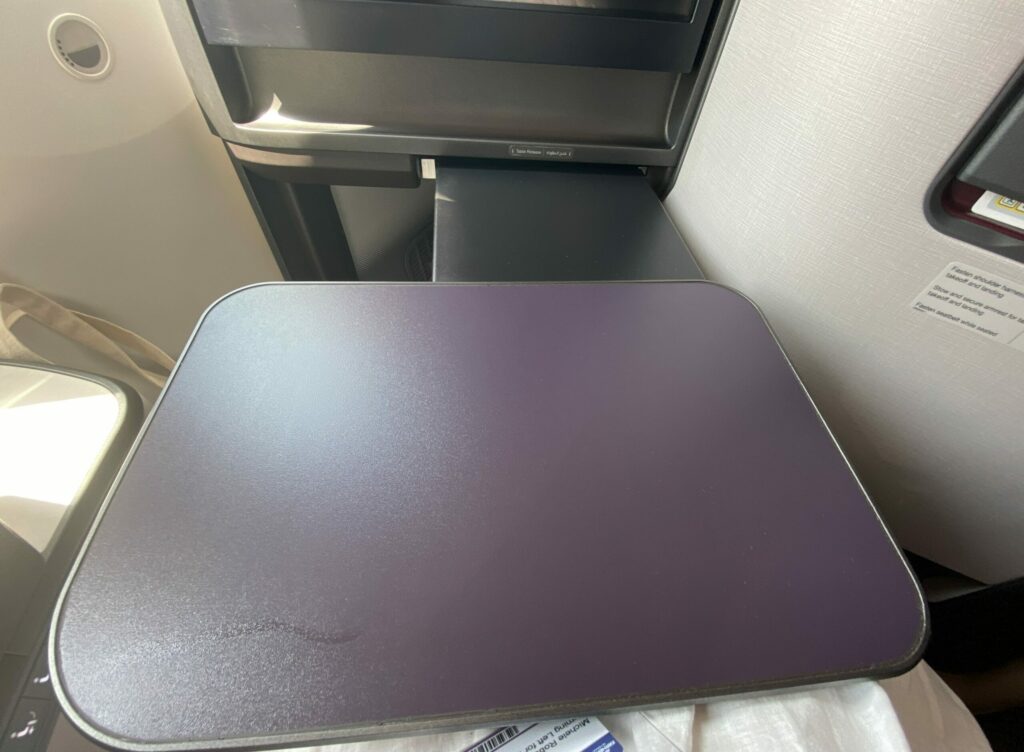 The table is large and feels substantial for working. It swivels to allow you to get out of your seat even during meal service and can be moved backwards and forwards too. 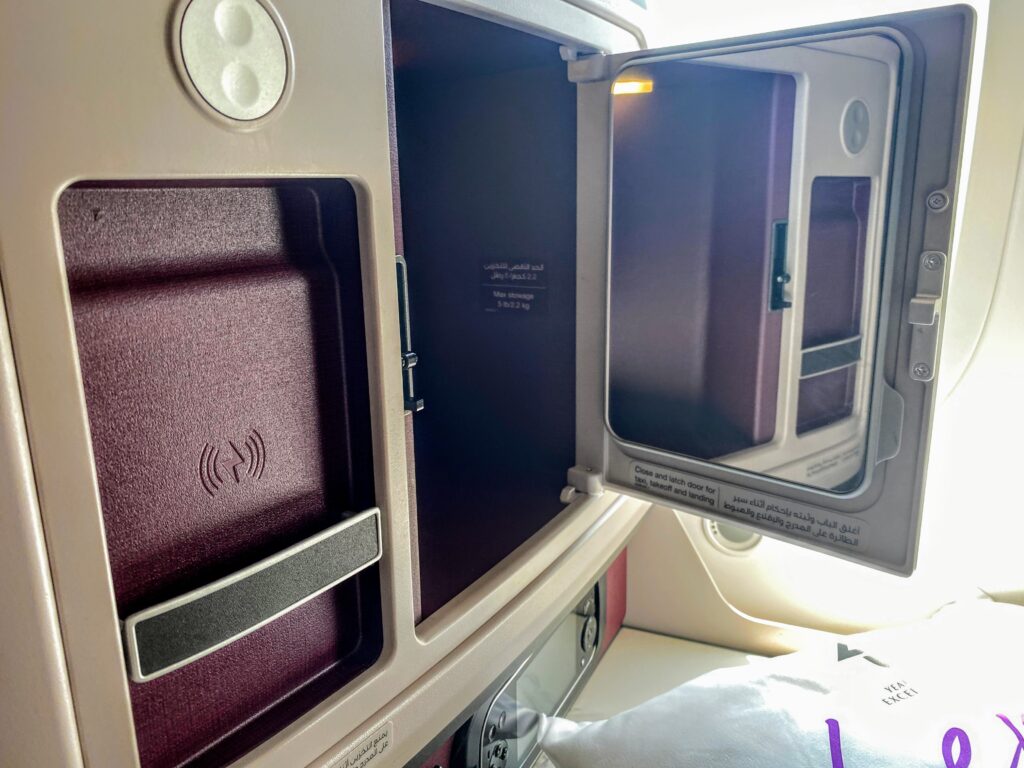 The only real issue with the Premium Suite versus the QSuite is the lack of storage. The Qsuites has plenty of storage whereas this design only has one small cupboard at head height which comes with a mirror. There is nowhere to store larger laptops. There is a magazine rack that you may squeeze a tablet or small laptop into.

Once you have taken off it’s not an issue as the clever design with the two-level side console allows you to use one part for drinks or snacks and the other for storage. 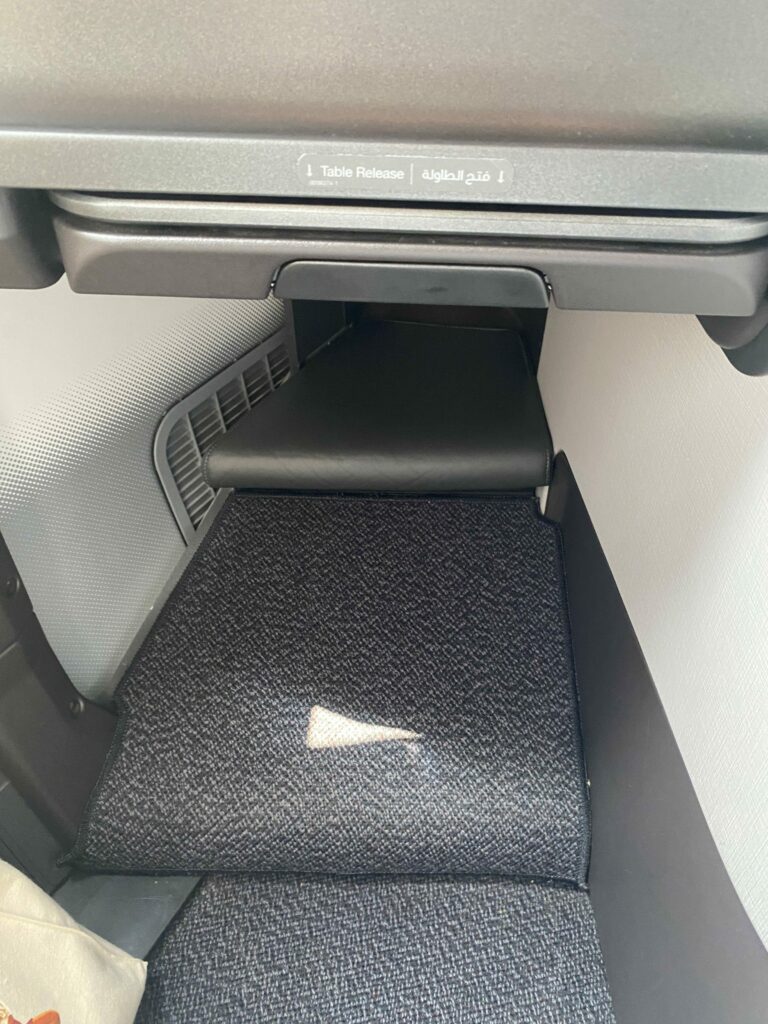 When lying down the footwell is on the small side if you have large feet.

Amenities include The White Company pyjamas and slippers and Diptyque toiletries. 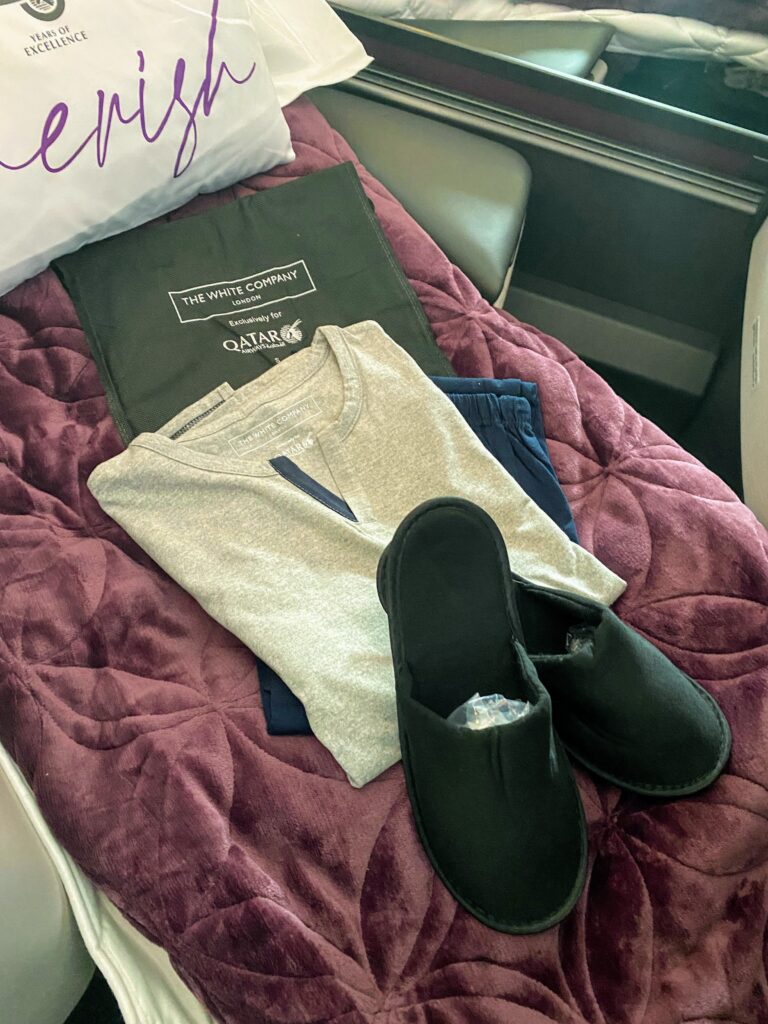 I wasn’t sure when I originally saw the announcement last year whether the smaller suite would seem slightly claustrophobic with the door shut for some people. It feels very similar to the BA seat in that respect, and certainly for me it still felt spacious with the door shut. I think because you have a large armrest to the side and the seat is angled away from the door towards the window, it helps the space to not feel cramped.

Routes from Doha where you are most likely to find the Premium Suite B787 at least once a day are:

You can tell quickly whether it is a B787-9 with the new suites or the older B787 non-suites by looking at Google Flights to see if it is shown as an individual suite or lie-flat seat.

Qatar currently only has 7 B787-9s, and further orders of the aircraft are delayed. 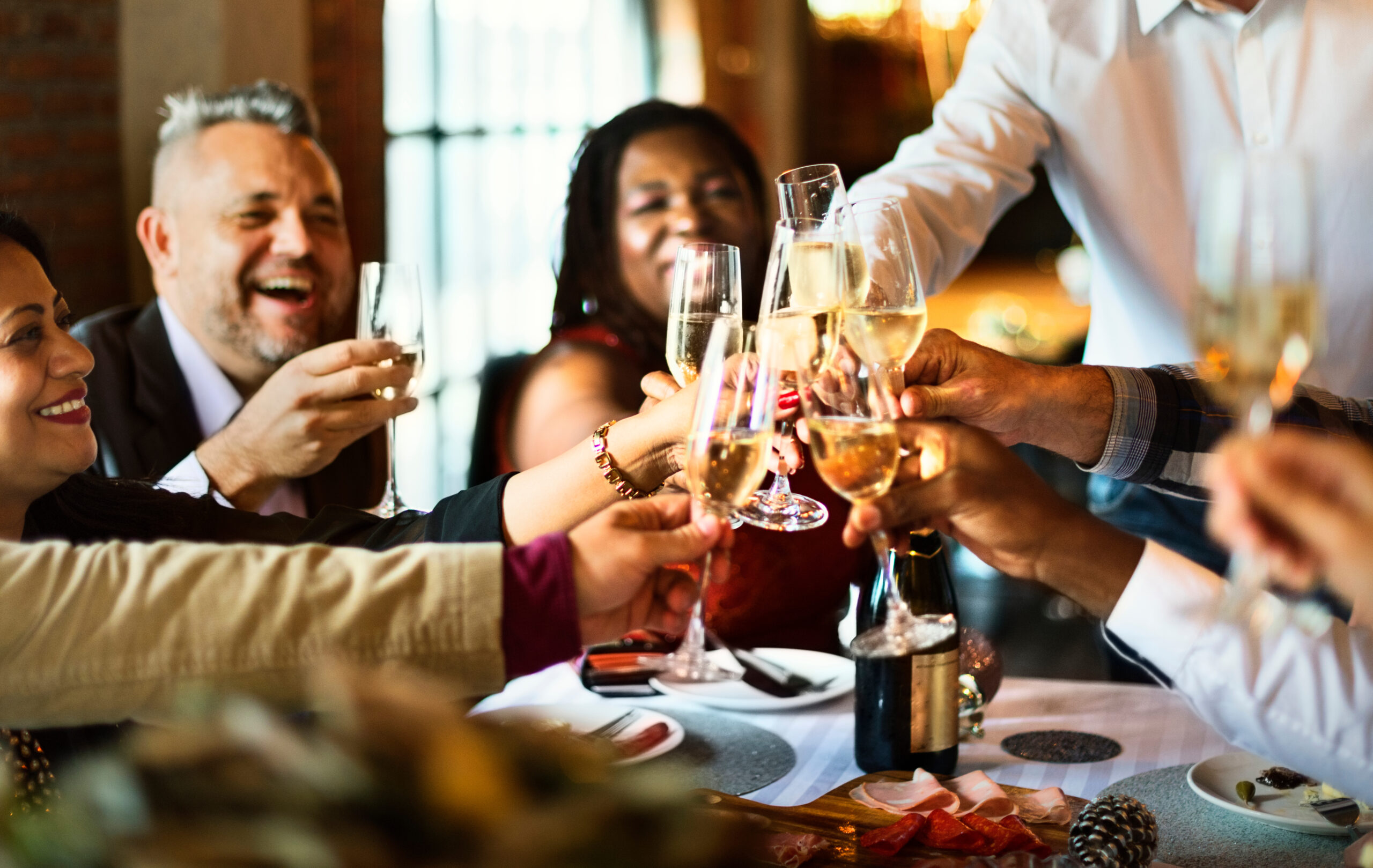 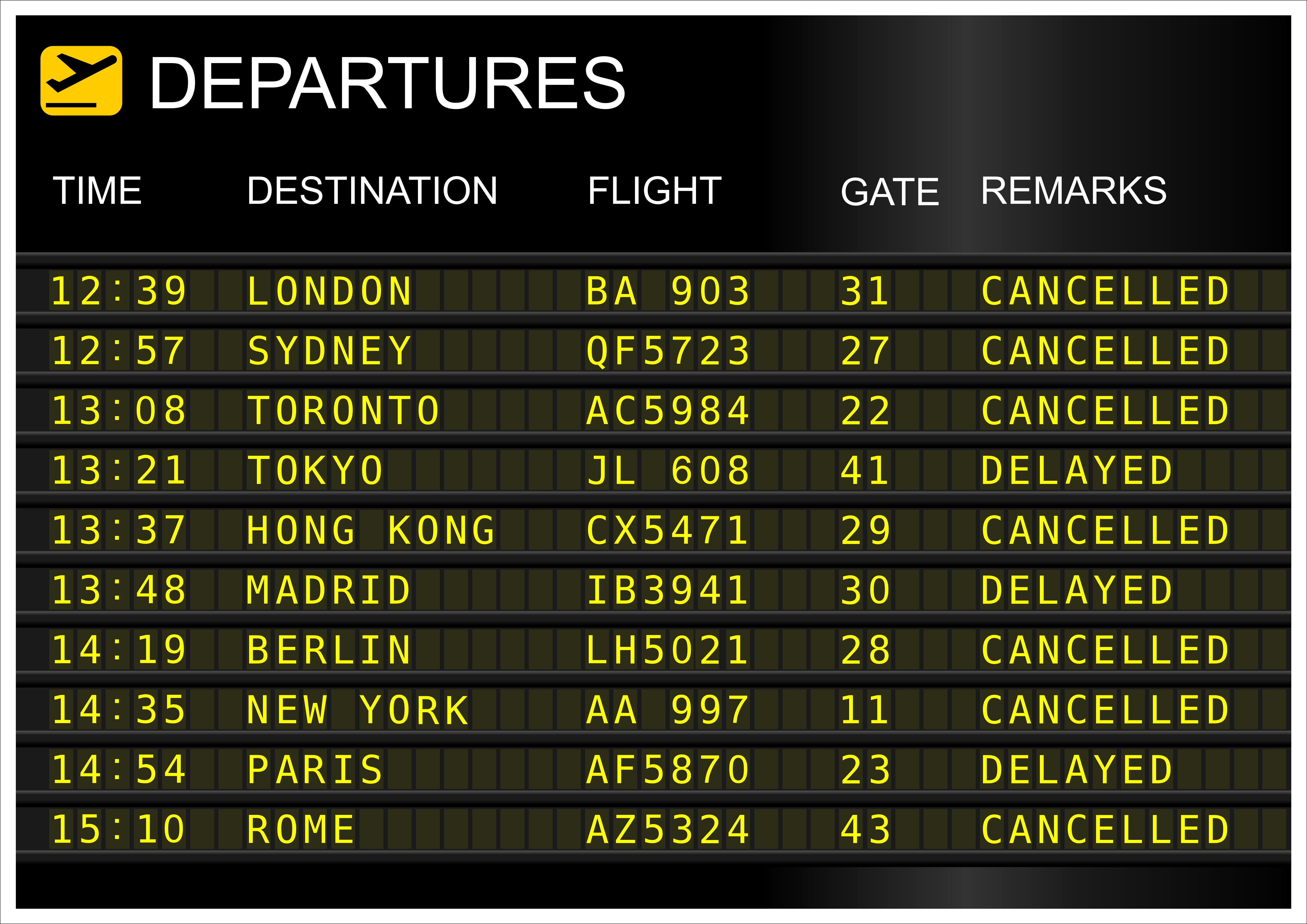