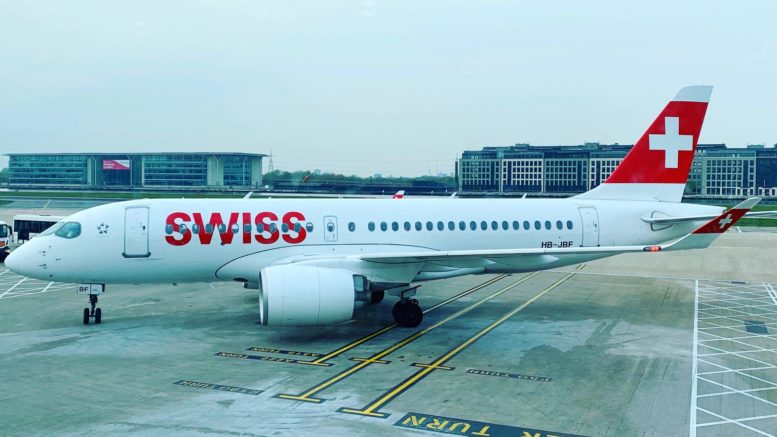 This was a very short flight, but very interesting for me. It was the first time I flew in a Bombardier Series C or the new Airbus A220 as it’s more commonly known now. An unremarkable event for most people, but not for those who enjoy airplanes. I’m sure the aviation geeks reading this will understand! 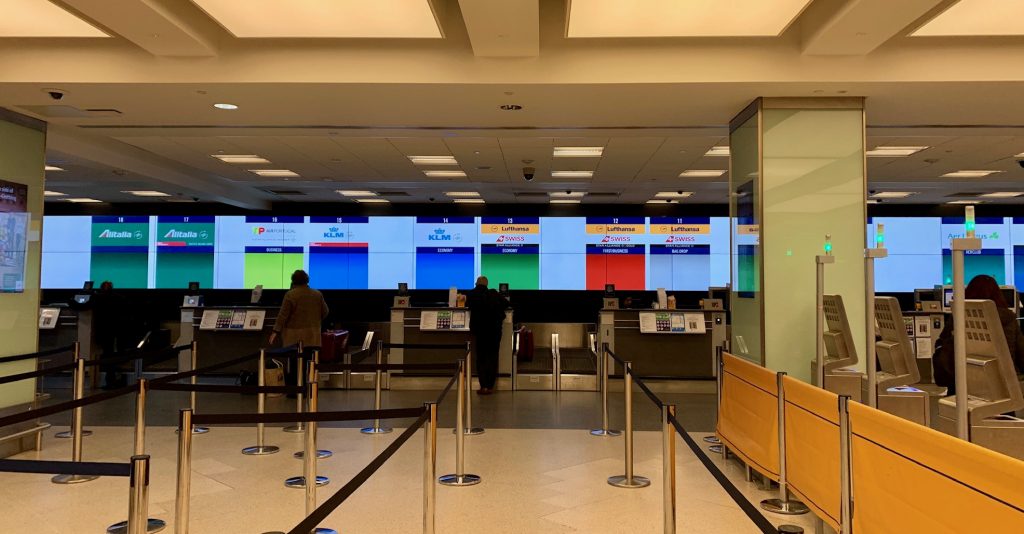 Anyone who knows City Airport in London knows how small it is. It only takes a matter of minutes to do all the check-in and security procedures.

My check in took less than 5 minutes as there was no one in line when I arrived and so I was taken care of immediately.

One thing of note happened during the check-in. I had already printed my boarding pass and at the end, she told me that the next time I should use the economy class check-in  When I asked her why she told me I was flying in economy! The fact that she said that in itself did not irritate me at all. It was more I was wondering about the level of attention she was devoting to what she was doing! Because she was unable to read the class of the trip on the boarding pass. Have a look at Swiss boarding pass –  they come written with BUSINESS CLASS in the upper right corner!

As it was the end of the day, the airport was very crowded and seemed mostly people who travel for work and who were now returning home. But even so, the security procedures were quick! In ten minutes I was already airside at the terminal.

I always say that those who travel constantly to work are well trained and have already prepared themselves before reaching the security scanning belt! Laptops, Tablets, Liquids and Belts all at hand! The queue definitely moves fast!!

The downside of City Airport is that because of its size – or lack of space depending on how you look at it, airlines don’t offer business class lounges. You can use the Private jet terminal business or first lounges if you pay for it. If you are a bit of a private jet geek you may find it worthwhile to do some plane spotting. The first class lounge includes a private car to the plane and their own security for most airlines. You can read my reviews here.

In many cases, airlines give a voucher for premium passengers to buy something in one of the bars at the airport. 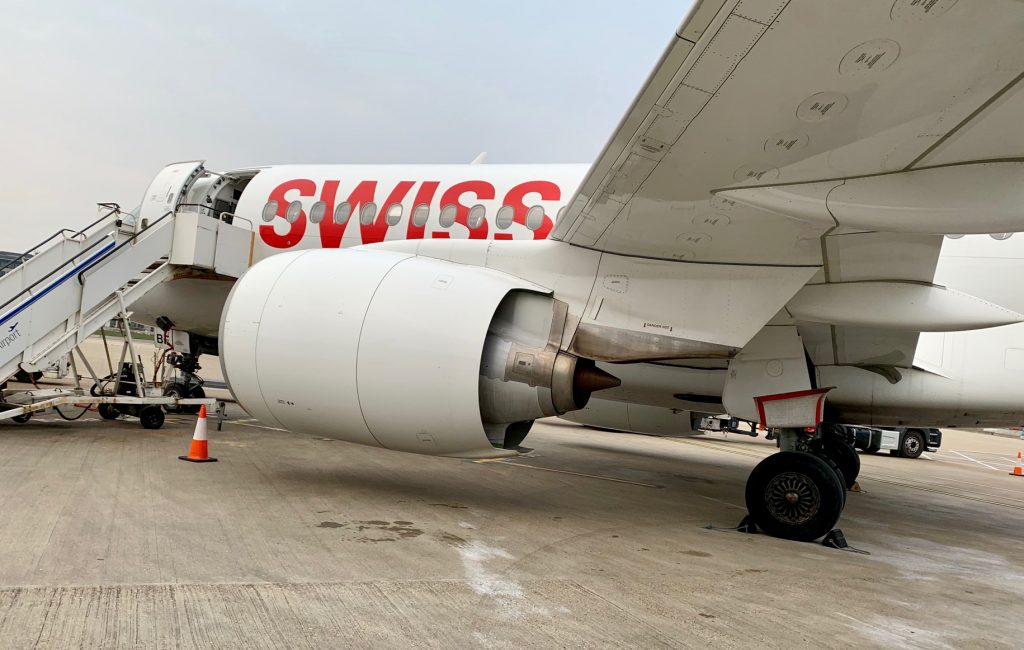 Boarding and take-off were bang on the scheduled time. For those who enjoy aircraft, boarding at London City is always fun as most of the time you walk to the plane.

The boarding procedure was very smooth. Two queues, one for business class and elite status on Star Alliance and one for other passengers. 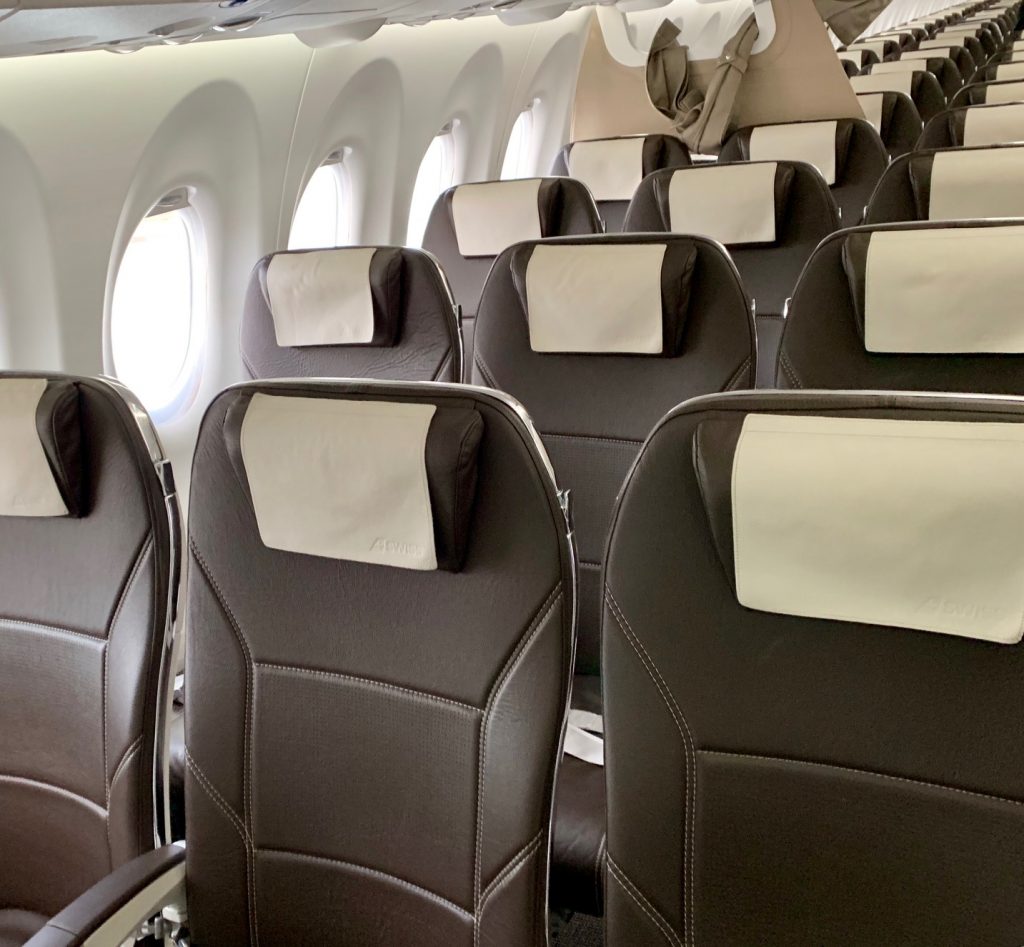 As with nearly all intra-European flights, the aircraft had the same seats in both business and economy class. The only difference is that in business the middle seat is blocked

The A220-100 has the 3-2 configuration. The left side seats A & C would be best for those who are travelling together and want to sit close together!

I like the colours of the Swiss cabins, I think it’s very elegant. One detail that caught my attention was the state of repair and cleanliness of the aircraft – including the bathroom. At least on this particular flight, Swiss is to be congratulated on such a clean and well-maintained cabin. 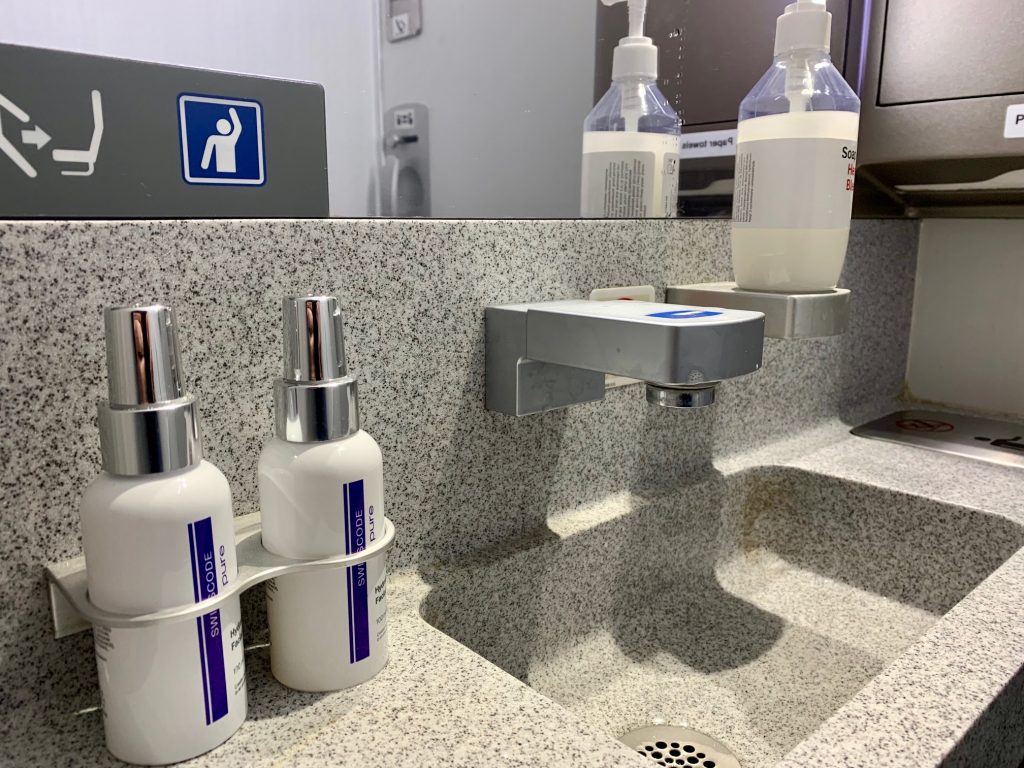 Unlike the other narrow body Airbus that have large monitors, the A220-100 has very small monitors due to its slightly smaller cabin. However, they are sufficient to see the flight status and watch the security video. 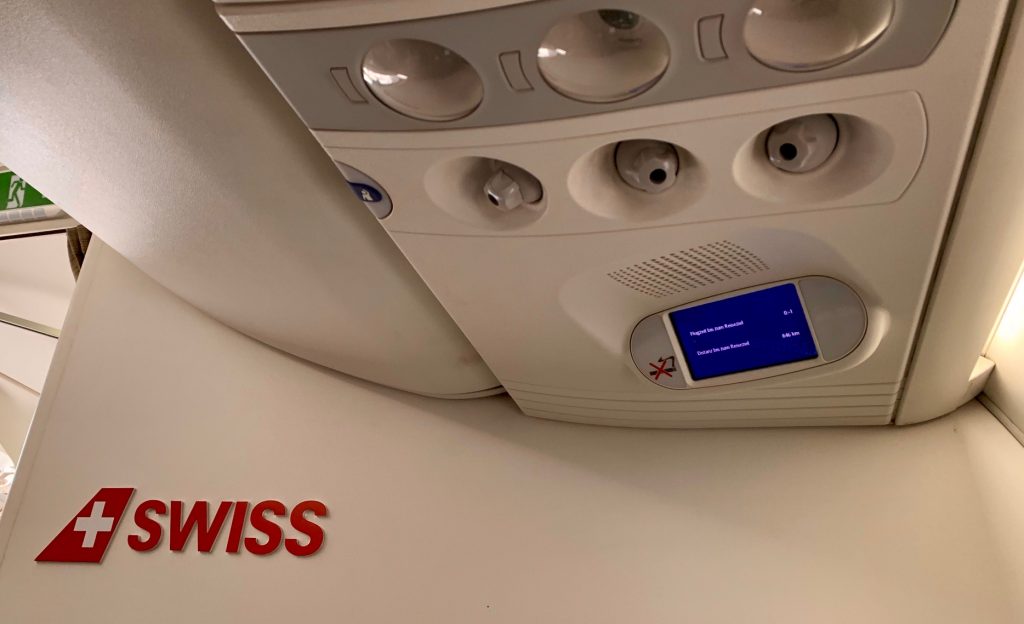 A few minutes after boarding had finished, the cabin crew had already handed me a bottle of water and a moist towellette.  I was informed that my laptop should go in the compartment above the seat along with my backpack for take-off as I would expect.

However, what I found nice was that after the seat belt sign had been gone off, the cabin crew came over to my seat and handed me the laptop. Hardly any other airline crews remember to do this.

The onboard service was quite simple, a cold piece of salmon with some side dishes that honestly do not know what they were. The best part was the flower-shaped cheese! One detail that really caught my eye was the size of the tray – there was no way it could have been any smaller! And I thought Club Europe ones were small! 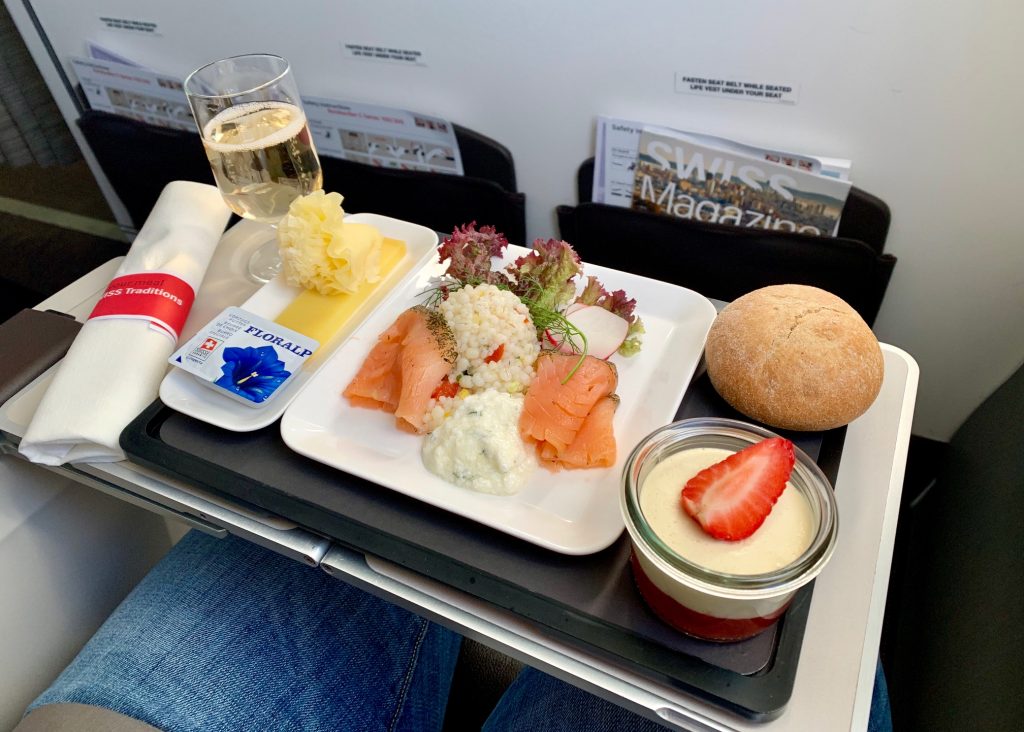 In addition to the meal, the crew passed through the cabin with the drinks cart twice. On offer was champagne, white wine, red wine, beer, soft drinks and some hot drinks. My glass was not empty for a minute which was impressive.

The crew forgot to distribute the famous Swiss chocolate during the flight, but they had a tray at the front of the plane after landing. The passengers could then help themselves when leaving the aircraft.

Excluding the quality of the meal, which is out of the control of the crew, the onboard service was excellent!

On a short flight like this, you would not expect any entertainment on board, other than the magazine in your seat pocket or the details of the flight on the screen. Although nowadays, everyone takes care of their own phone, computer or tablet.

SWISS now also offers passengers the chance to download various magazines and newspapers that can be read on board. BA and Iberia also do this.

The flight as a whole was quite pleasant, in line with the service normally offered by SWISS. The highlight was undoubtedly the friendliness of the cabin crew.

When we arrived in Zurich the aircraft stopped at a remote position which I normally dislike. This was softened by the fact that business class passengers were taken in a minibus to the terminal. This definitely made a good impression! 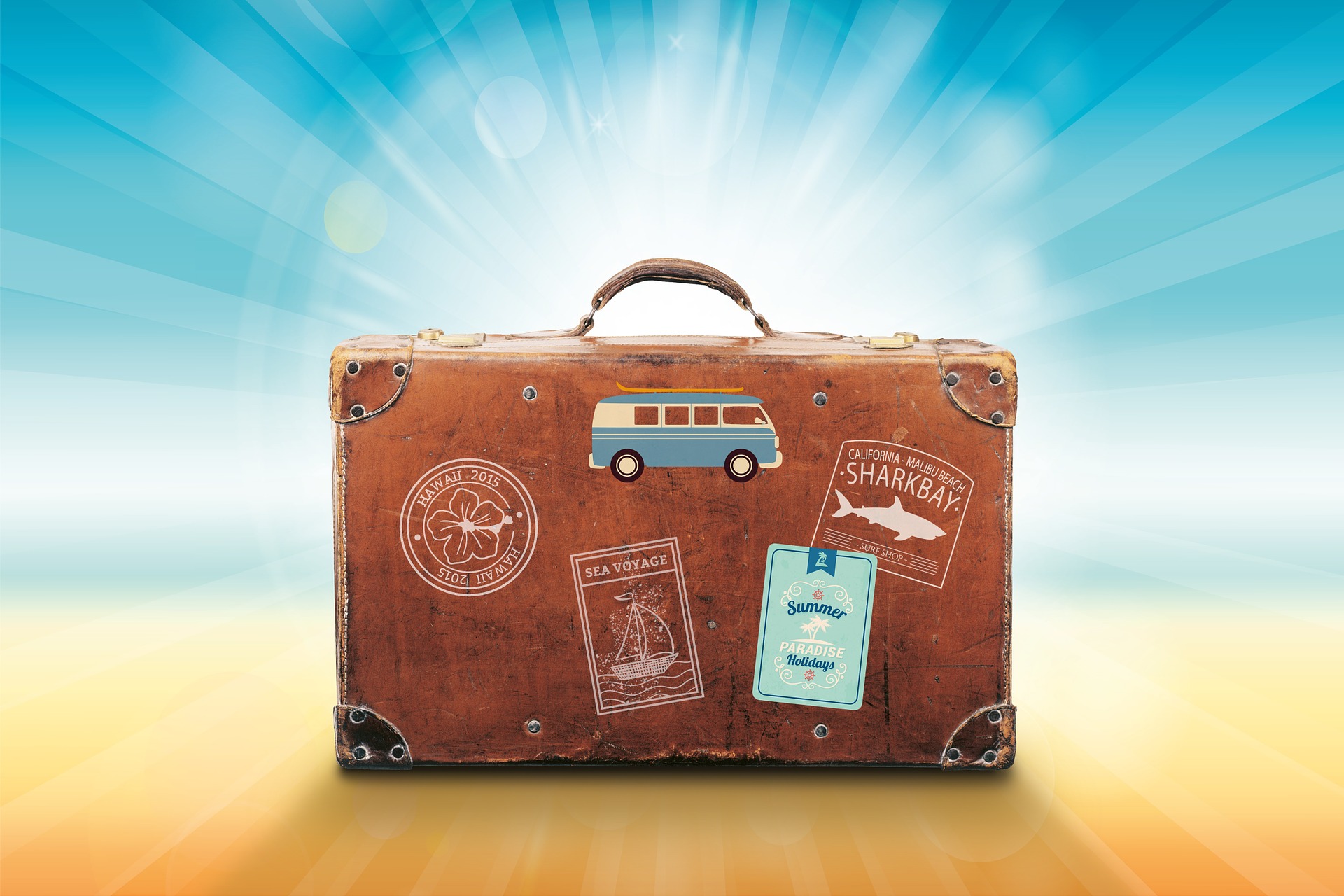 How to survive a week with hand baggage only – top tips 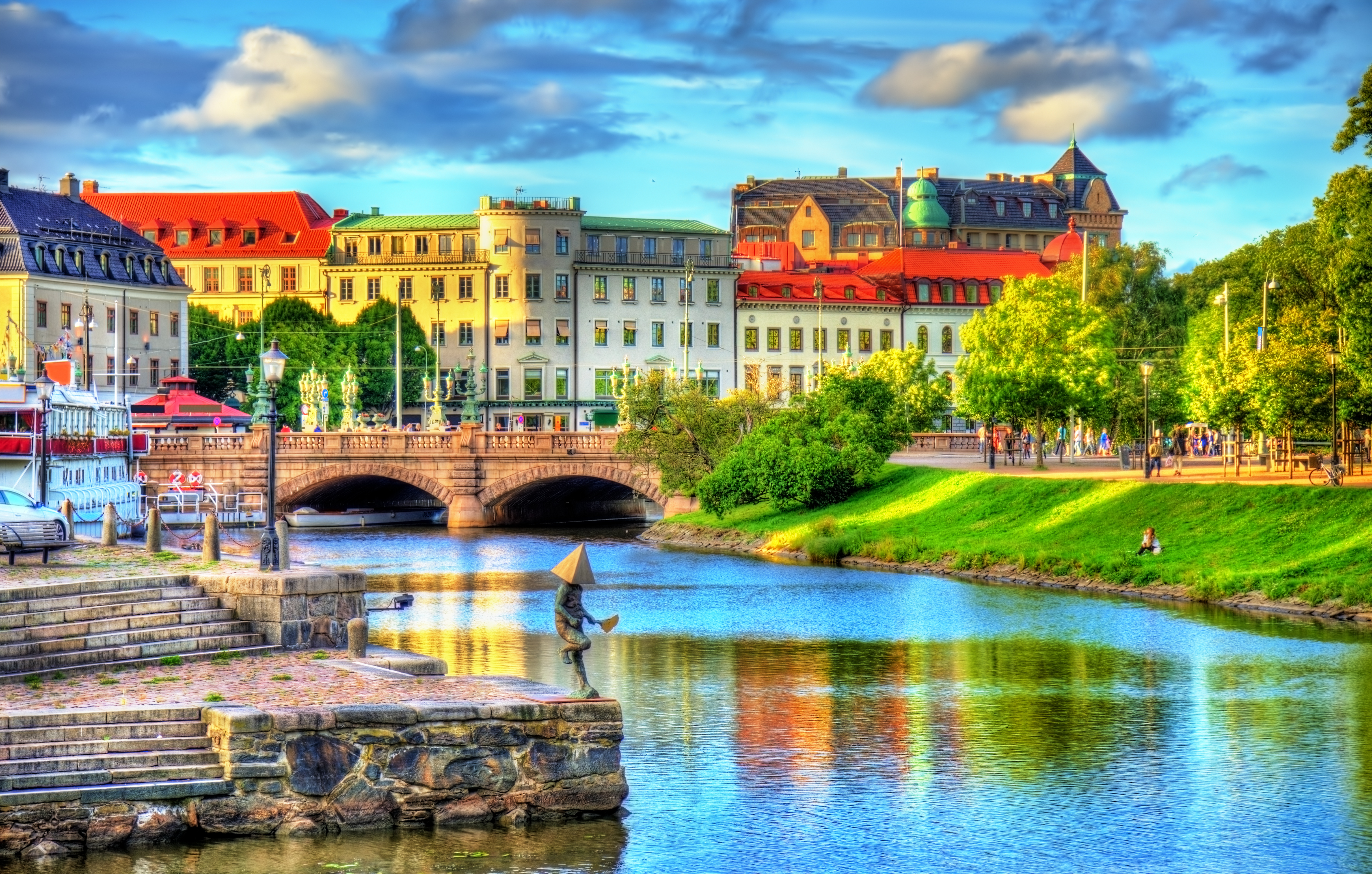 Flying from Gothenburg Qatar business class – including where to stay & is it worth a night stop?