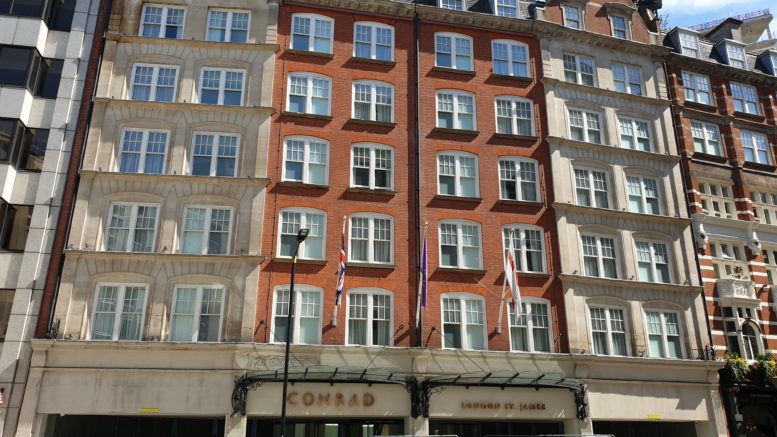 My friend Sam decided to treat himself to a London mini-break and kindly agreed to share his experiences with TLFL at the Conrad. He checked into the hotel only a couple of days after it had reopened in early July.

The Conrad has published information including all the menus and opening times on a special website which they send you the link of:

Sam was sent an email welcoming him to the hotel a few days before and upgrading him to an Executive room from a basic room. He is a Gold Hilton Honors member. He had booked the room using 80,000 points per night for a base room. The cash price was £220. 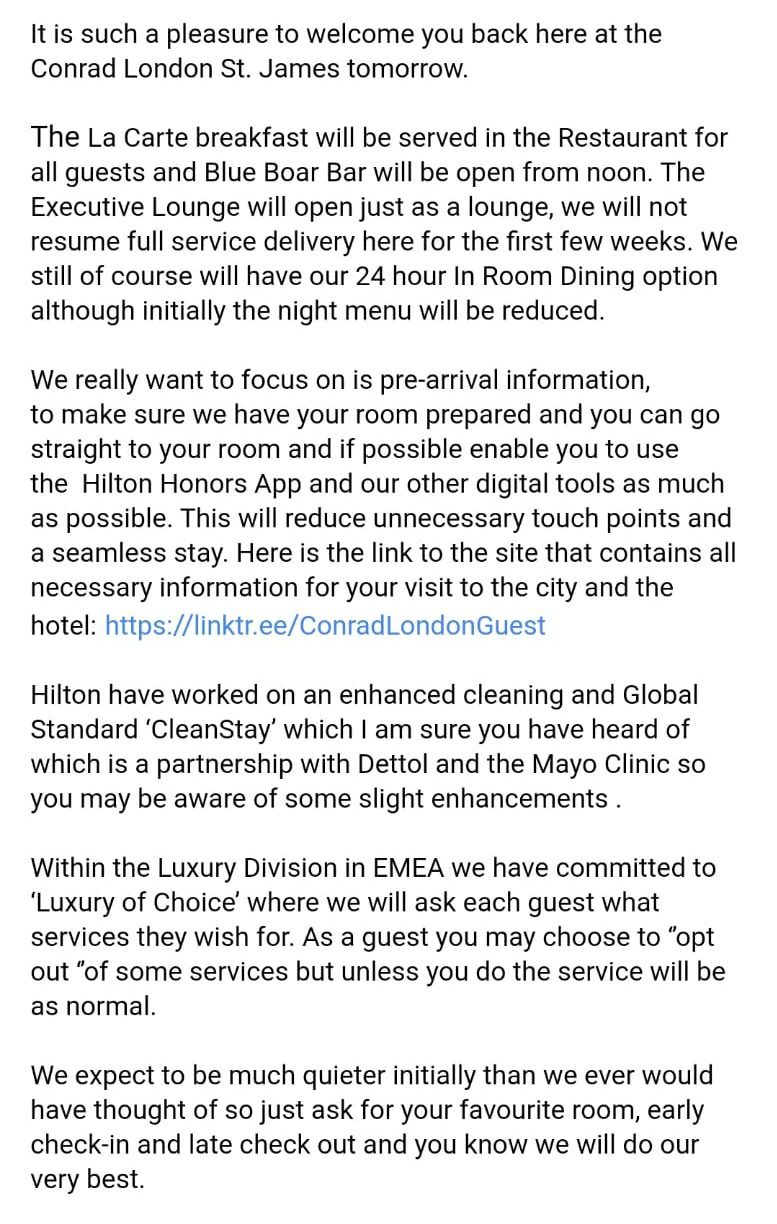 Then he received another email with a further upgrade to a Junior suite, and a 5pm late checkout agreed before he even got there. The suite would have cost £380 a night. This is quite a contrast with my previous experiences at the Conrad. The Conrad is normally pretty busy and I have stayed their three or four times now and only ever got a one-category upgrade to a marginally bigger (small) room. That’s aside from the time they left me waiting for ages to get a room past check-in time and finally upgraded me to a suite as there was nothing else ready. Generally, I am not a fan of the hotel, there is nearly always something that has gone wrong on every stay or event that I have had there. You can read my review here.

On arrival, Sam found that there was a large group staying which may have been the reason for his upgrade. I do find that a bit strange to have a large group booking given the rules on meeting other households inside. As soon as they learned Sam wasn’t in the group, he was taken to one side and all the check-in paperwork sorted. He was also asked if he was happy for them to clean his room as normal. 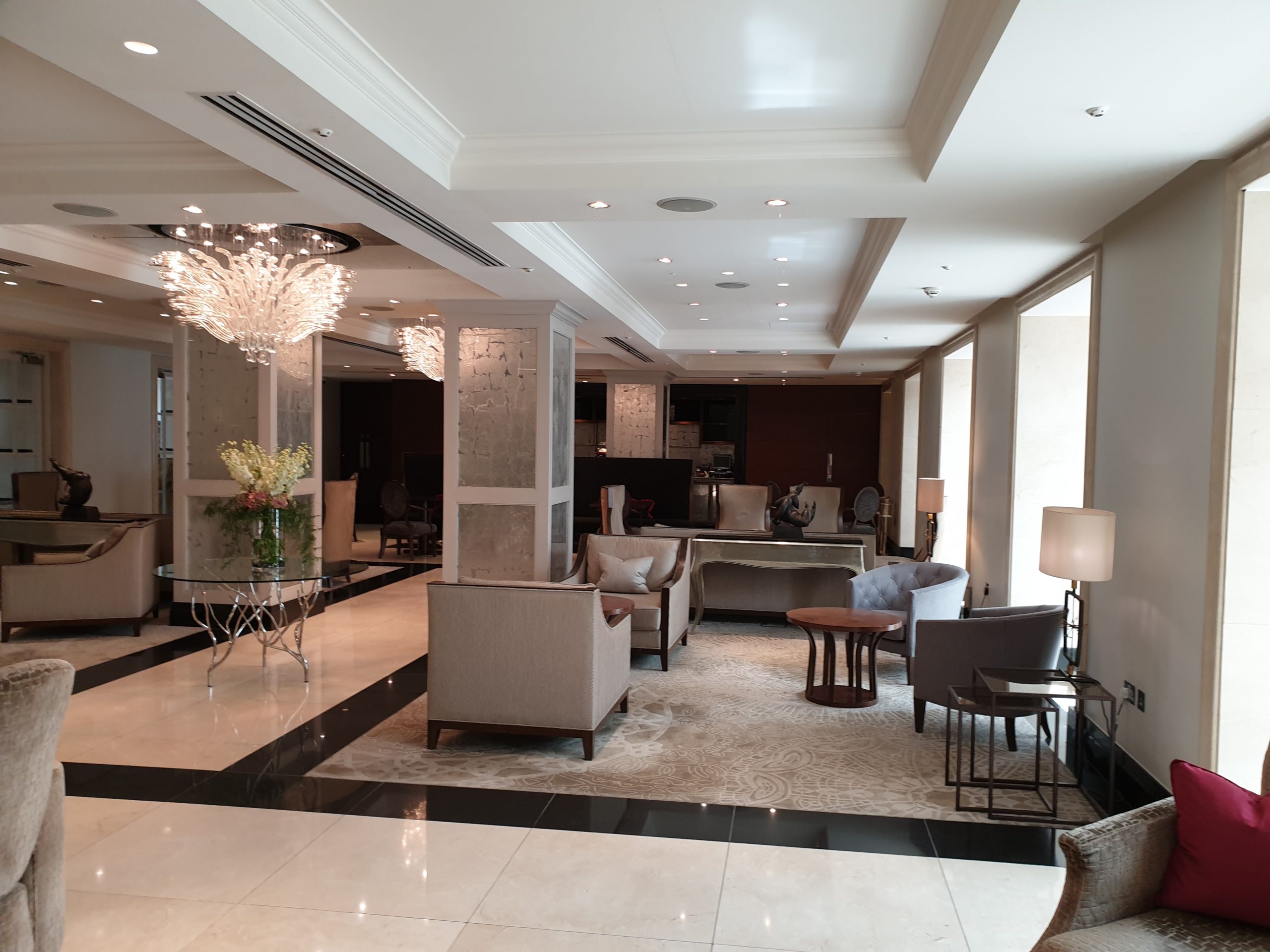 At the time of his stay, they were only using the first few floors.

Hilton now have these rather gimmicky stickers on the outside of doors that are meant to show the room has been properly cleaned for occupation. Sadly at some other Hilton hotels, this means nothing as some people have been greeted with fridges with leftover food, and dirty rooms. Not so at the Conrad fortunately! 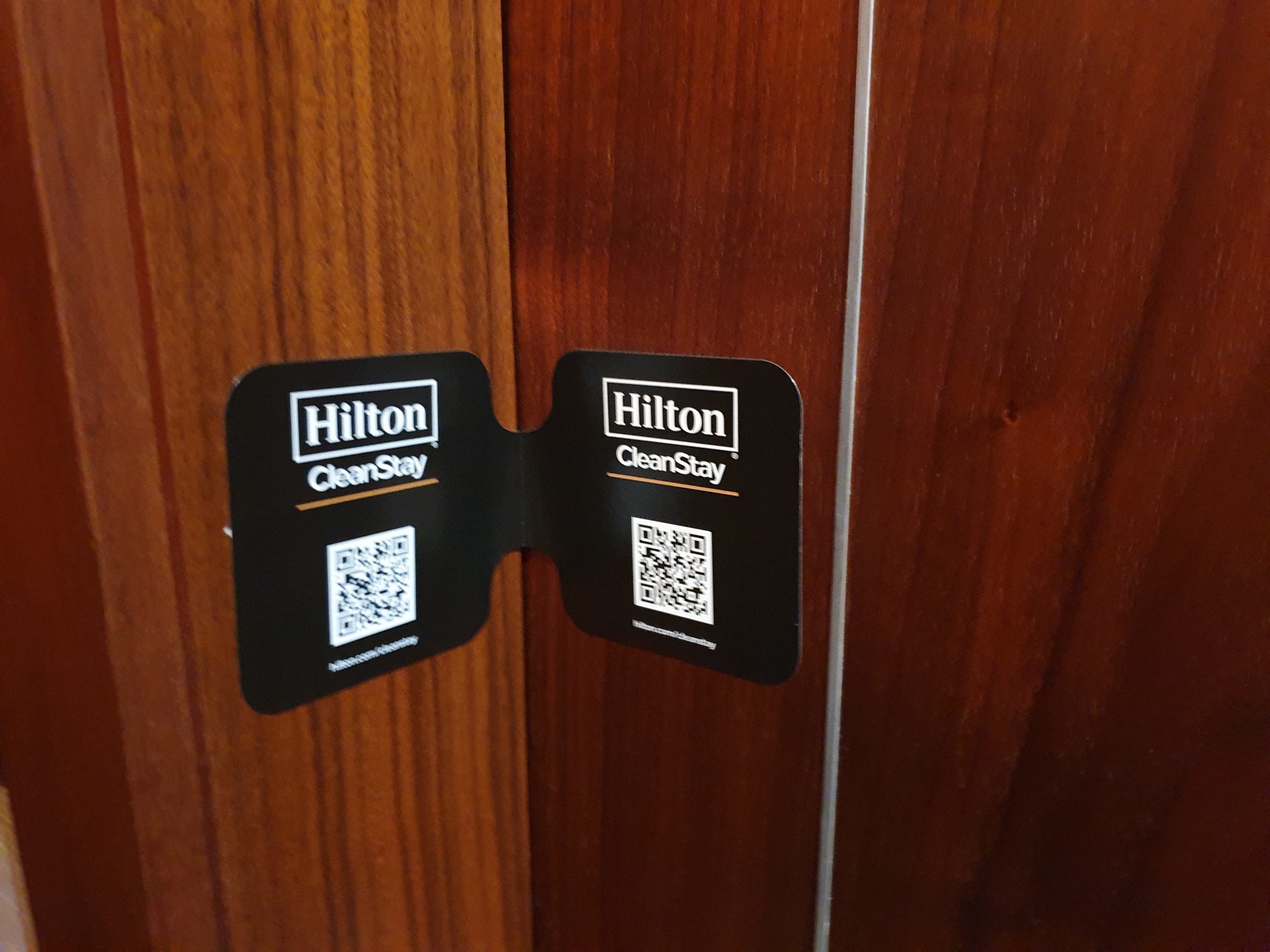 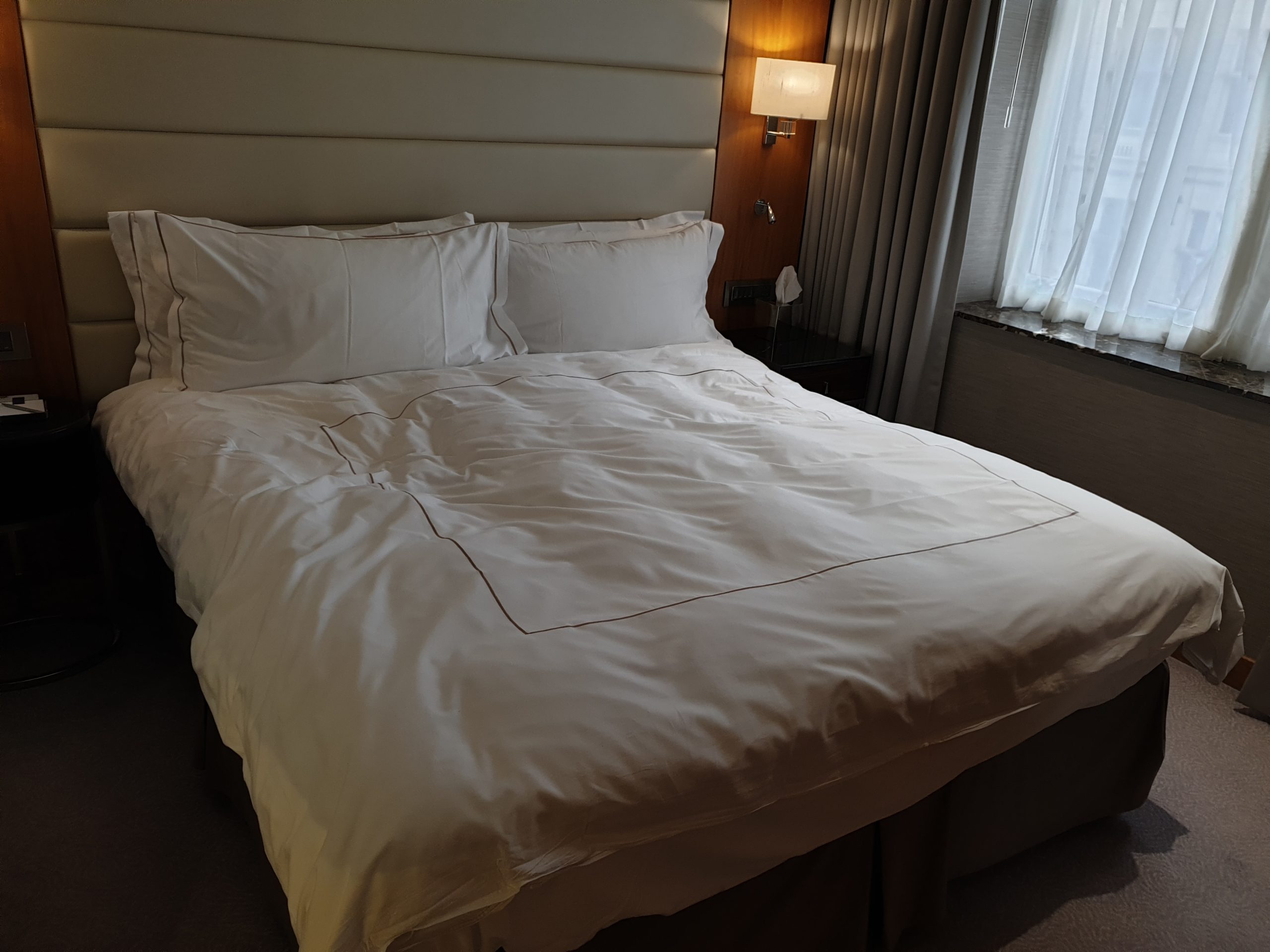 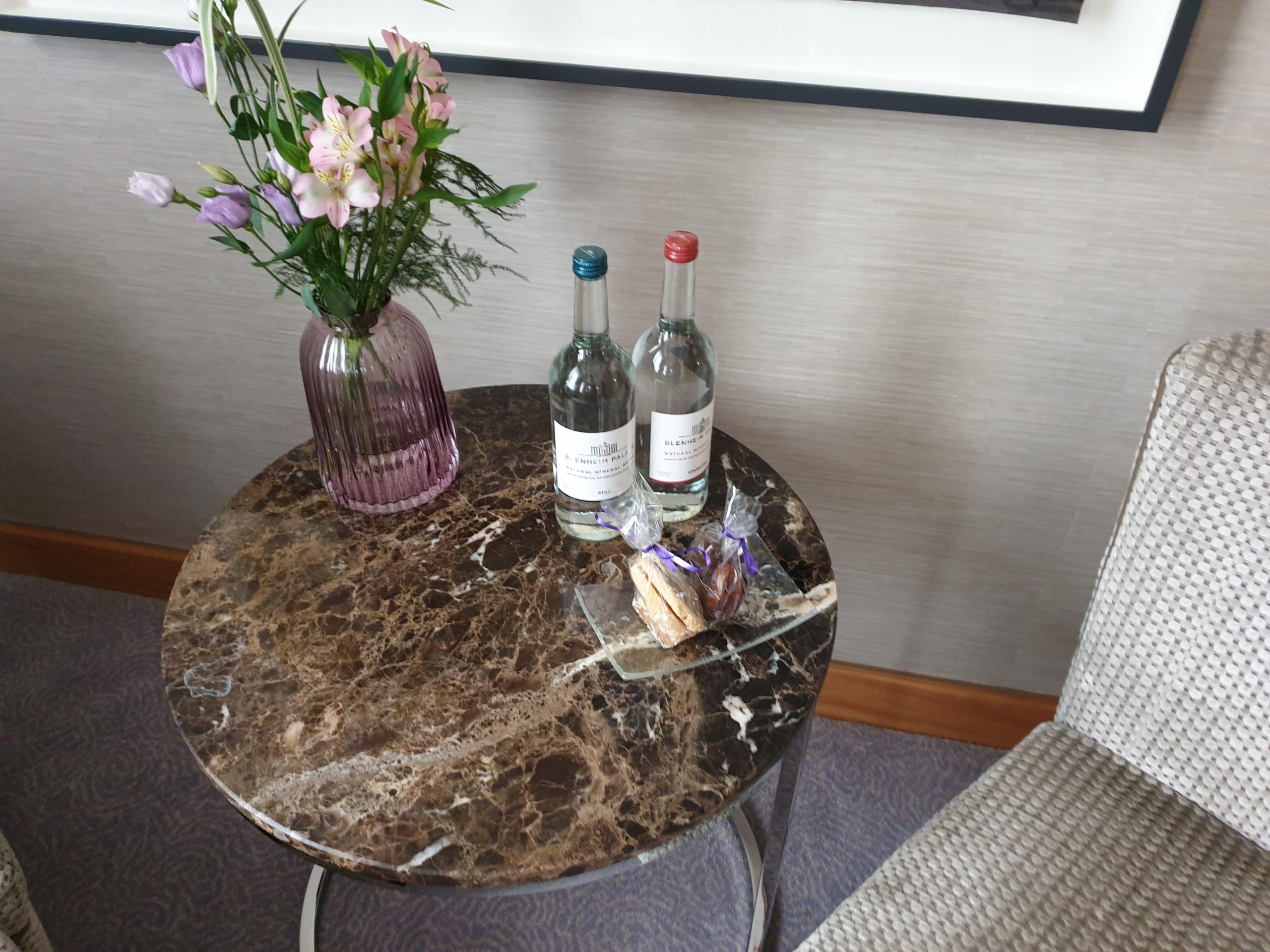 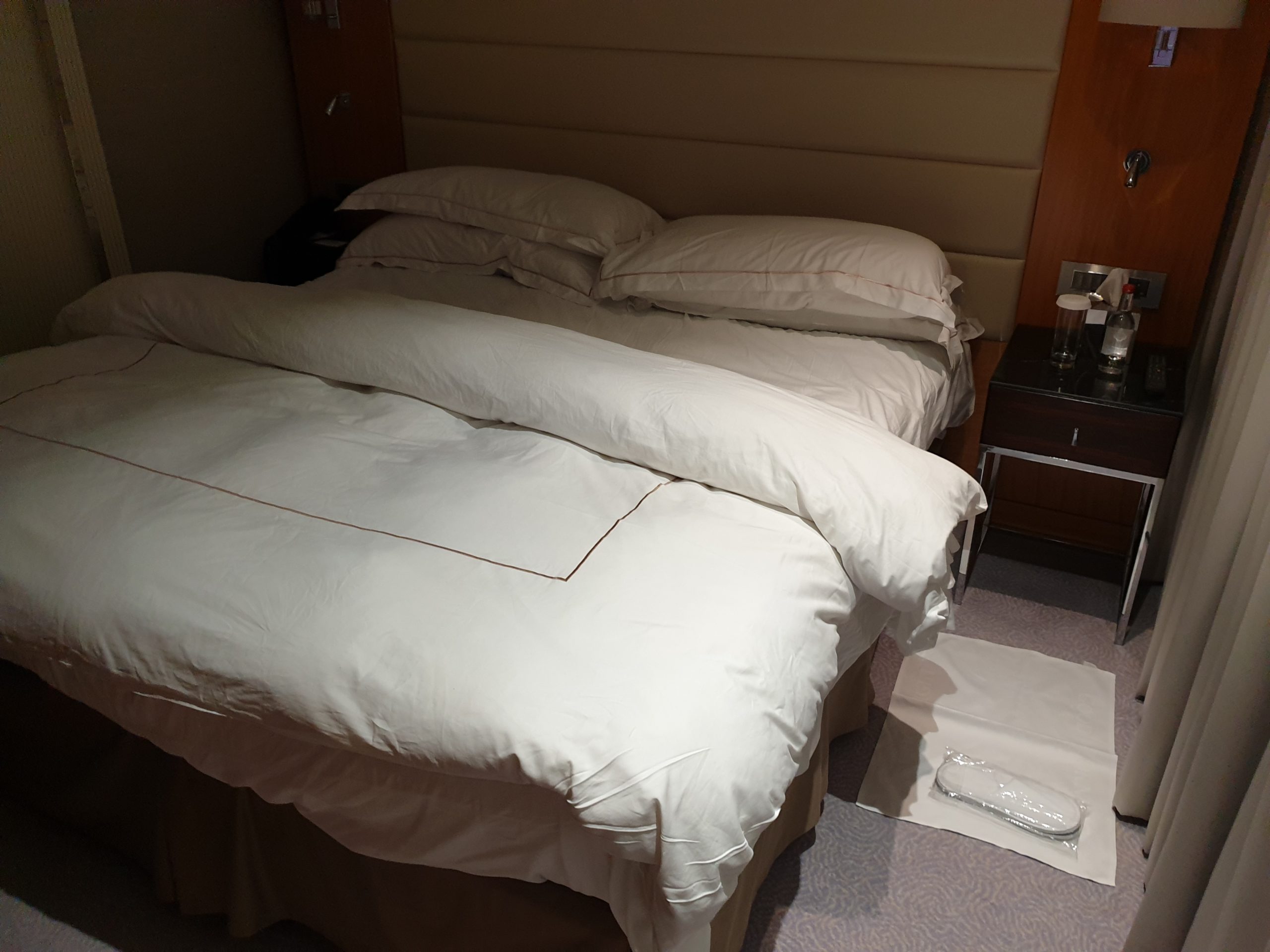 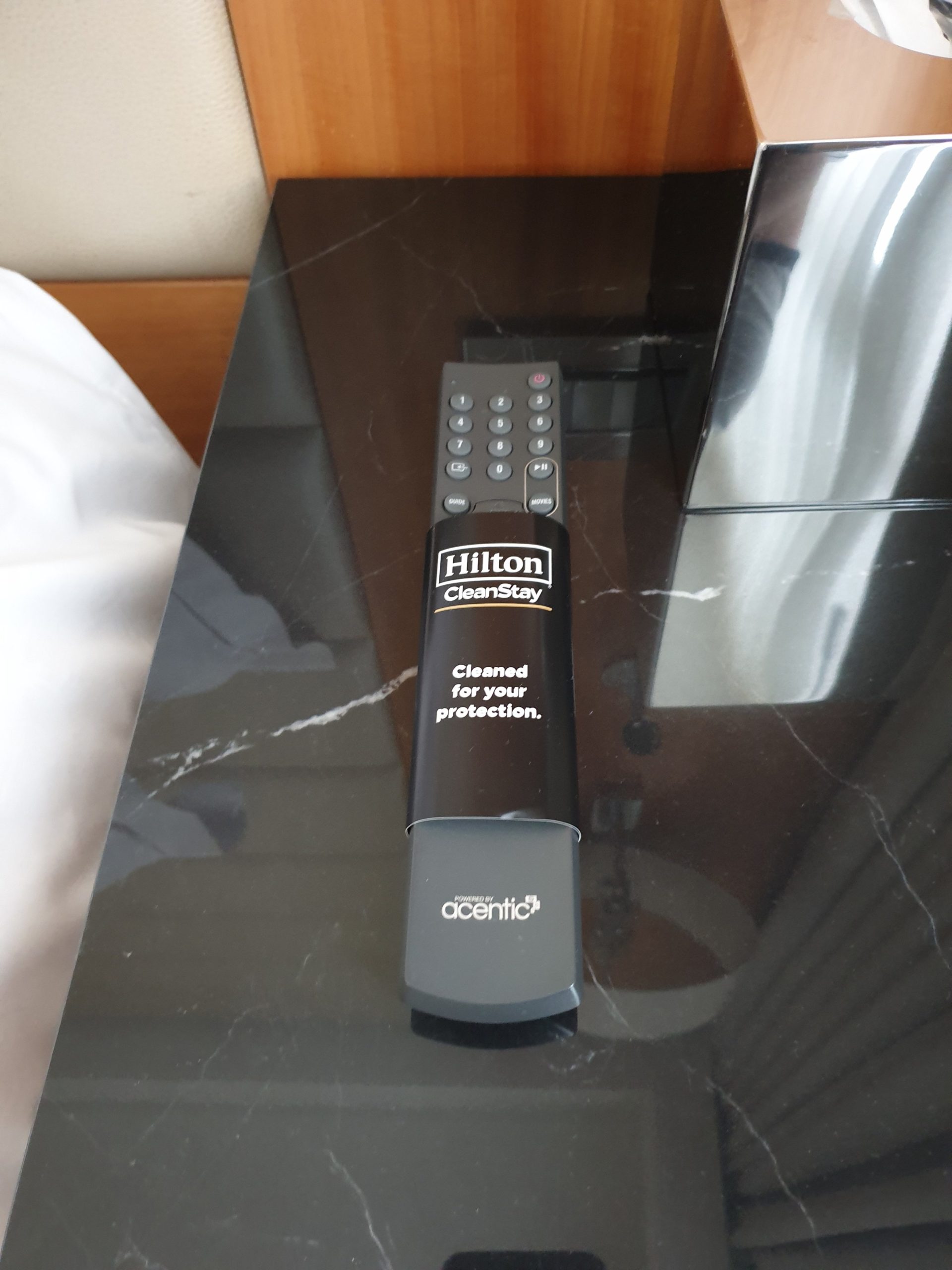 The bathrooms at the Conrad are something of a highlight with large bathtubs, abundant toiletries from Shanghai Tang (mandarin fragrance) and well-lit mirrors. There is plenty of storage space by and below the vanity area. 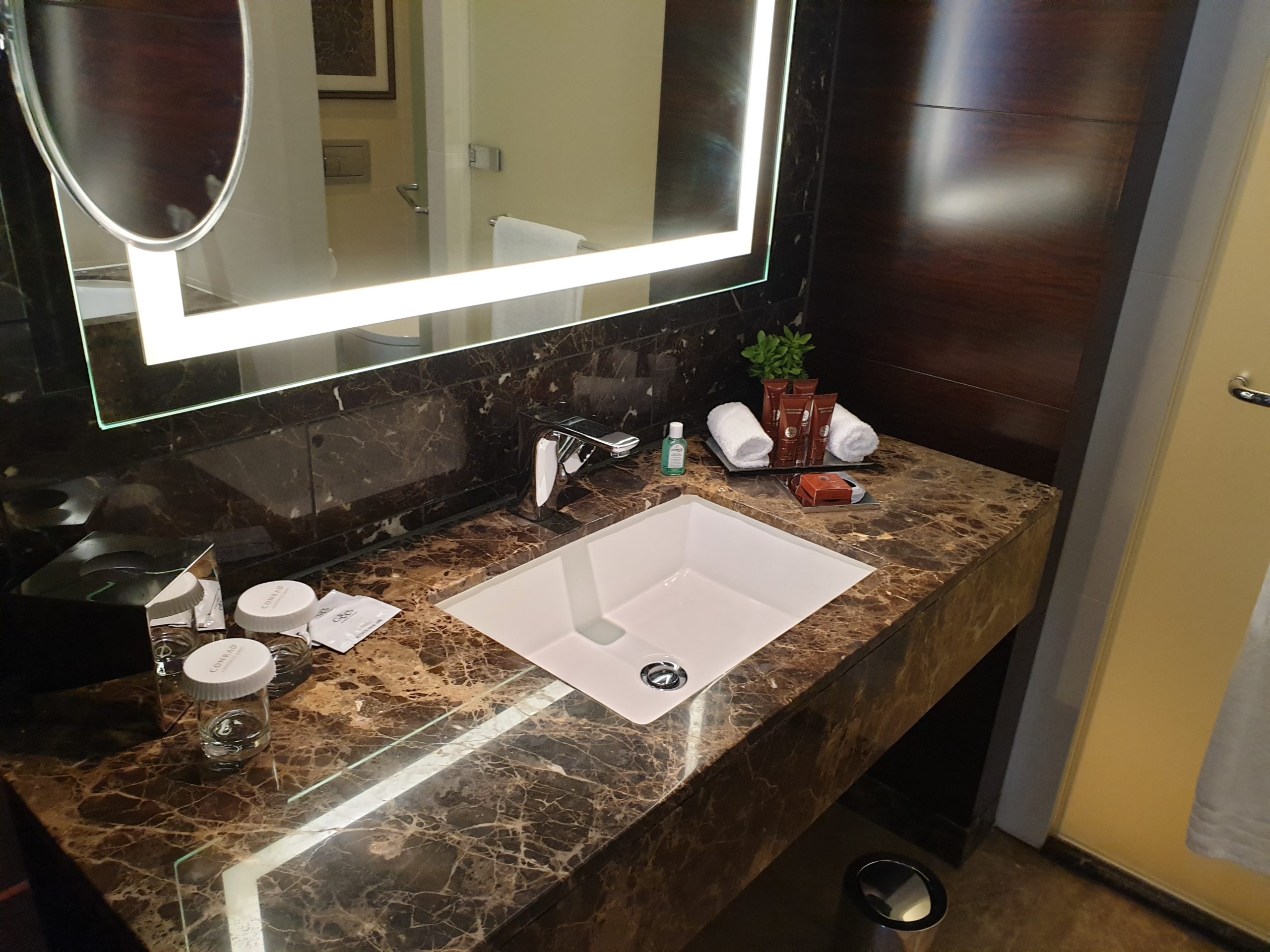 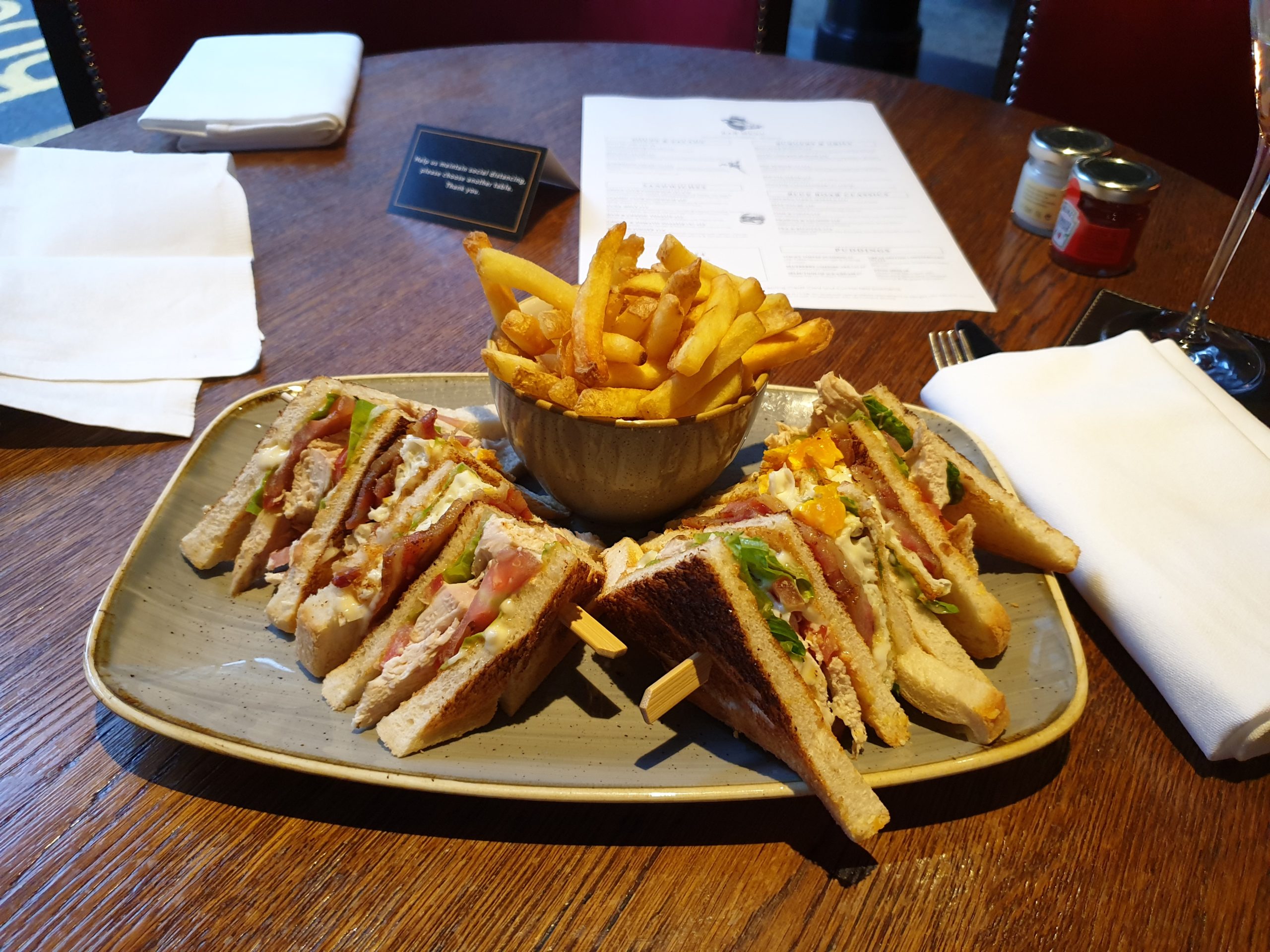 There is no restaurant open but the Blue Blue Boar bar is open. There is also a room service menu that is identical to that of the bar but it looks like they’ve dropped the tray charge. 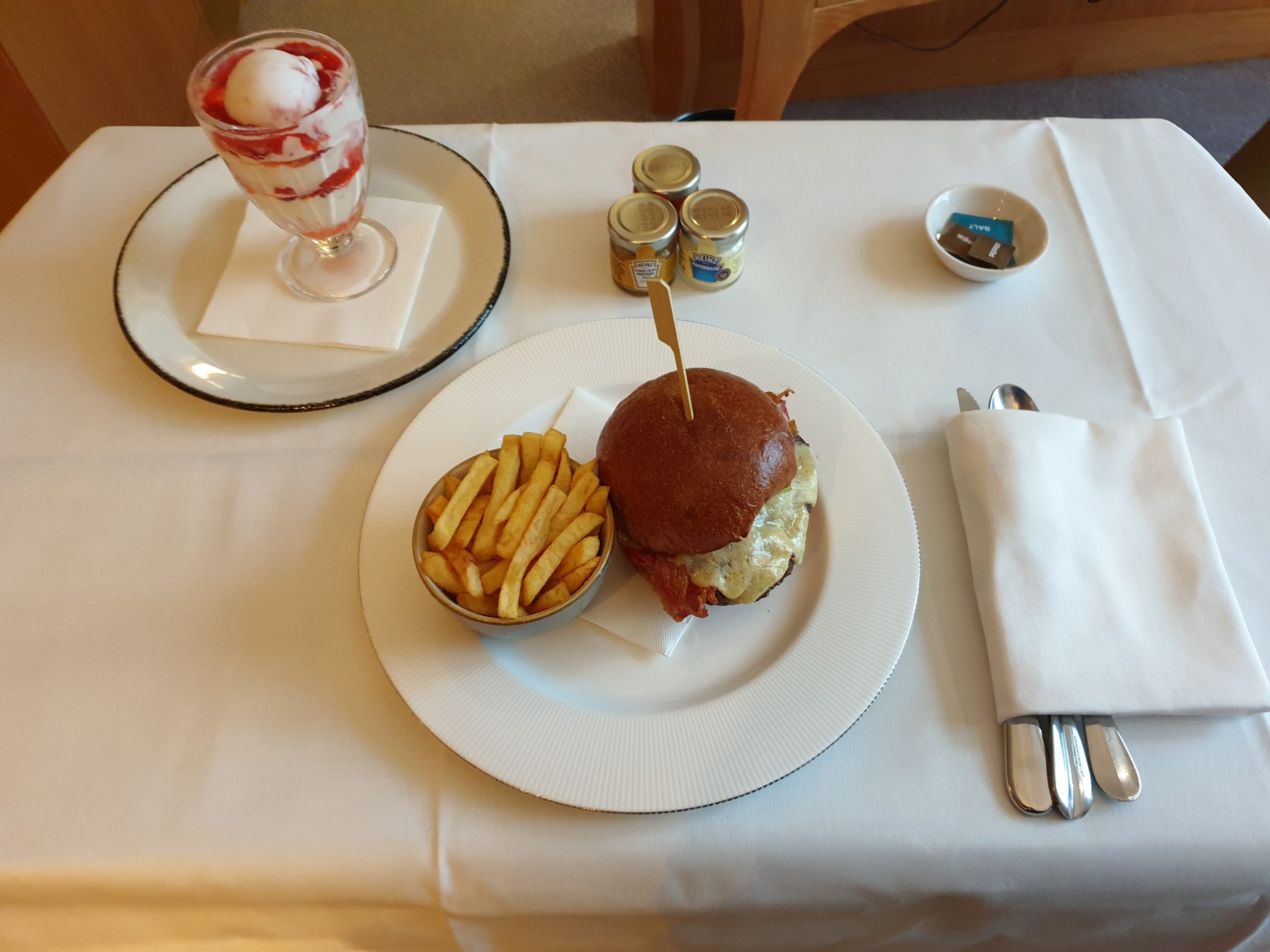 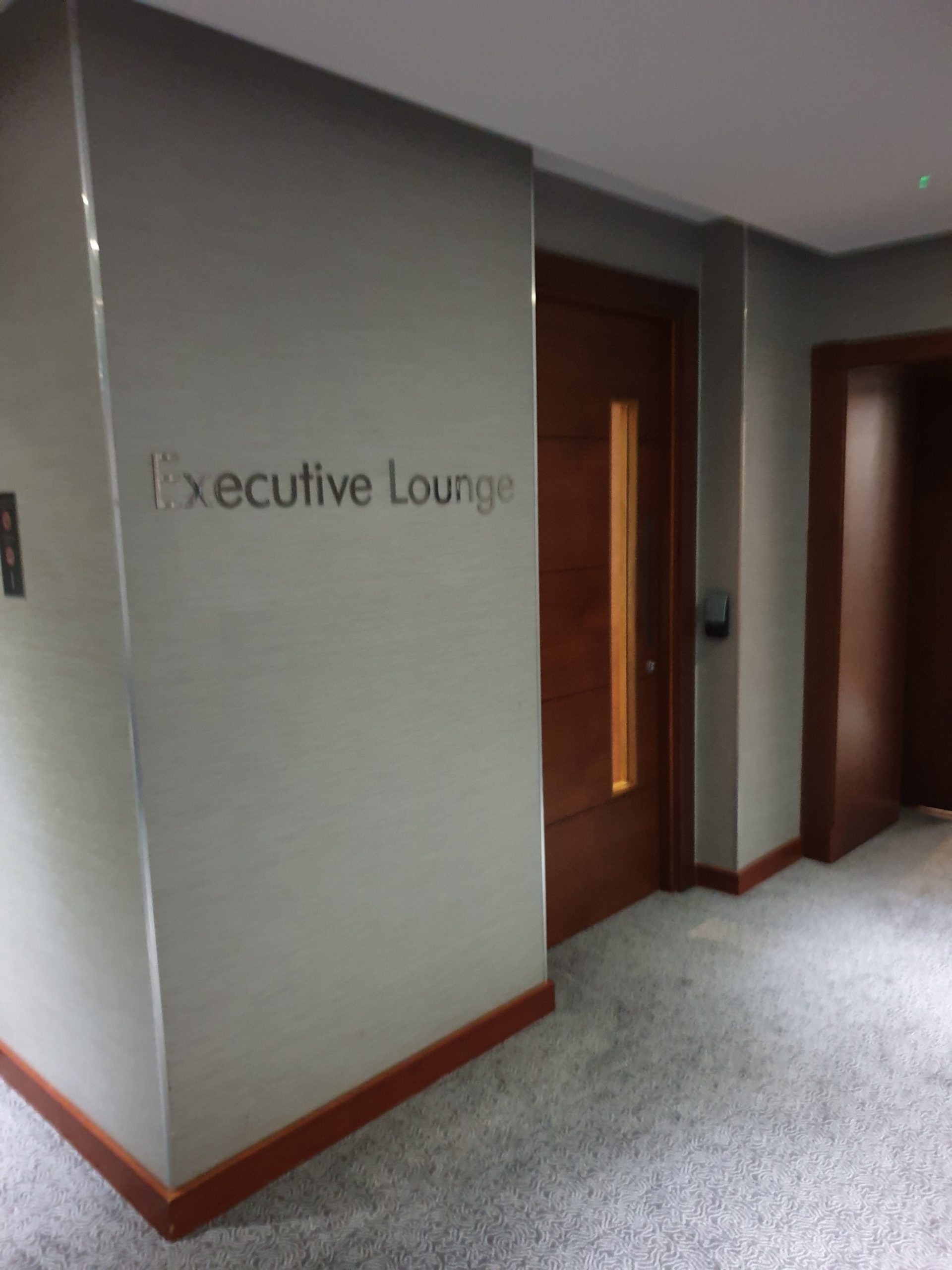 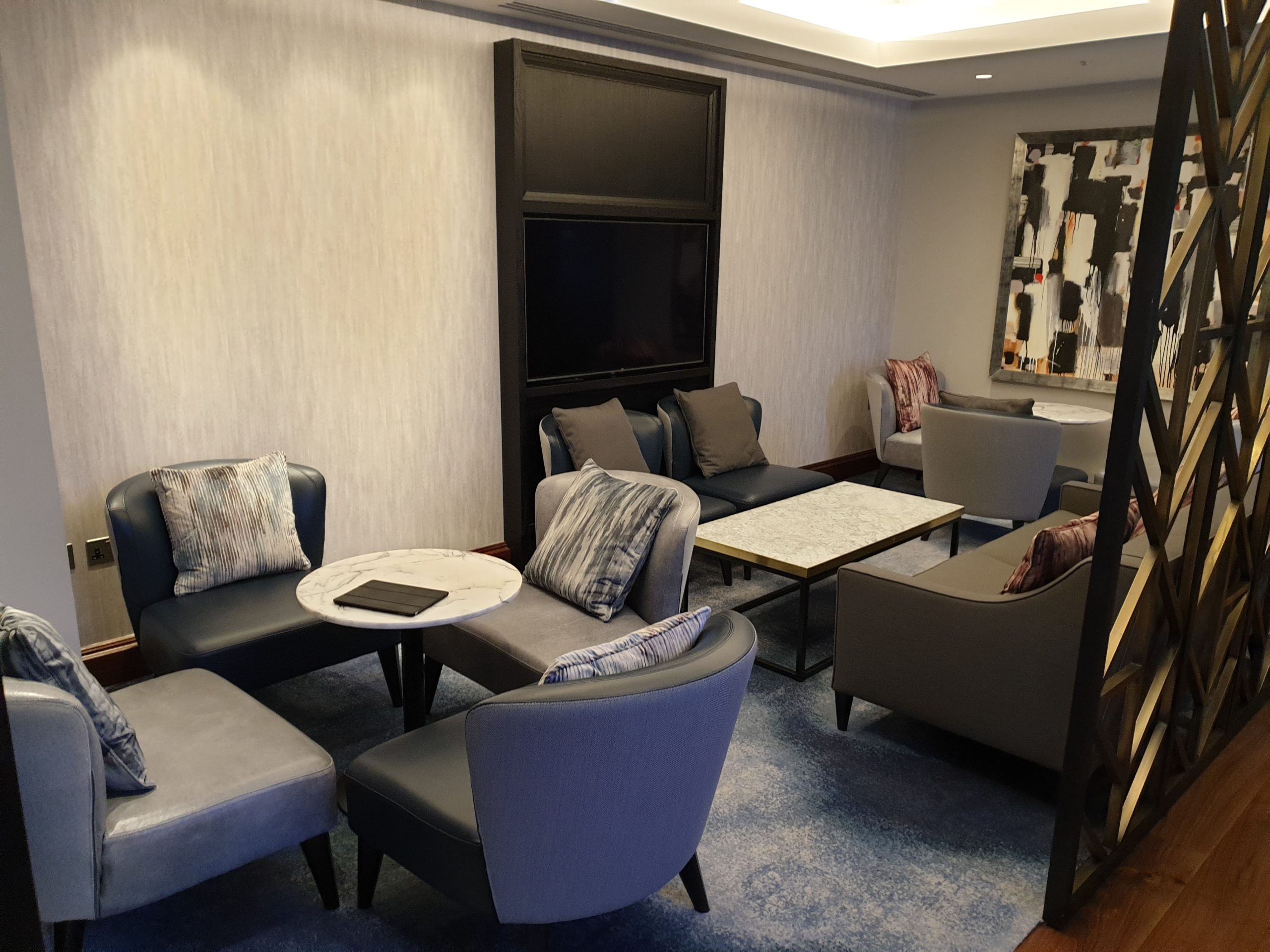 The Executive lounge was open but only as somewhere to sit, not to eat and drink. There were, however, soft drinks in the fridges.

In lieu of the usual services, drinks and canapes were served in the bar from 6.30-7.30pm. 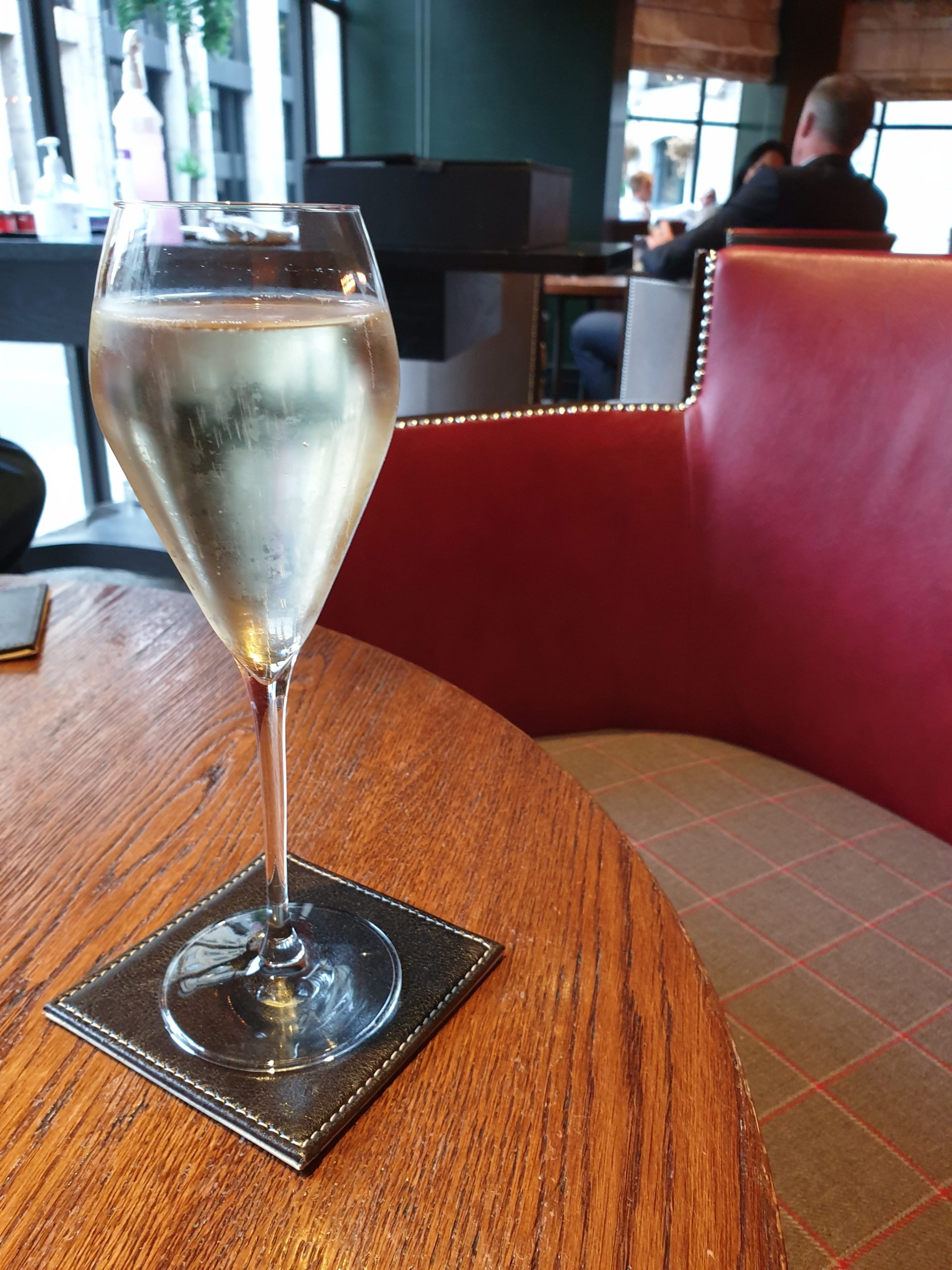 There was a choice of wines, spirits, soft drinks in the bar but there was no menu. Sparkling wine was not officially one of the options but Sam was given some anyway! 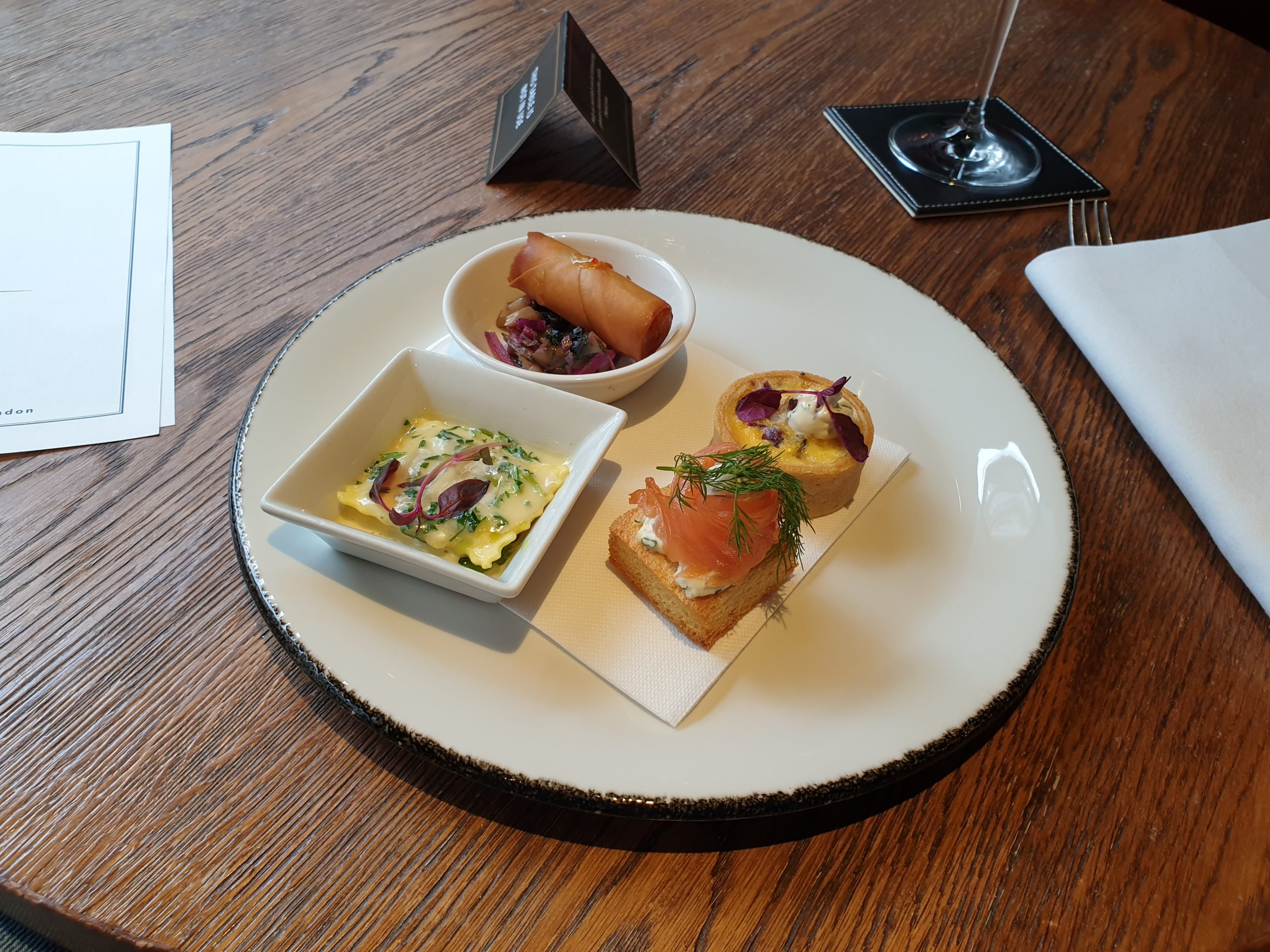 During the hour you could have as much as you wanted and on one night canapes and more drinks were offered without needing to ask. On the other night, the service was not as efficient. There was a long wait to get served which when you only have an hour is frustrating. I think that it would be easier if they gave you drink coupons which you can use at any point if they are not able to deliver efficient service or they need to make the time slot at least 90 minutes like a normal lounge offering would be. 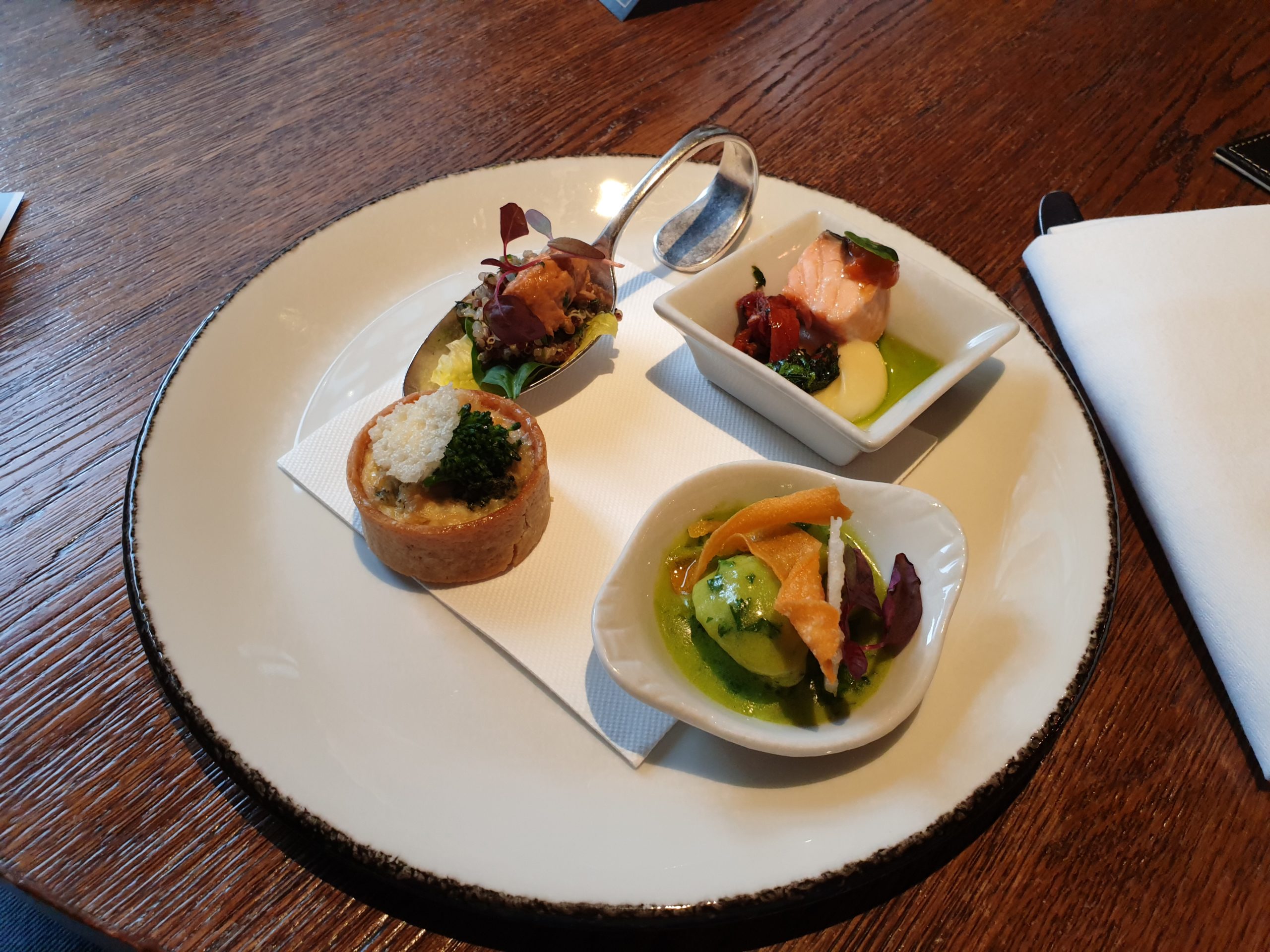 Breakfast is free for Gold cardholders. You could have whatever you wanted from the menu as there was no buffet. Most of the buffet items were on the menu apart from the meat and cheese selection. 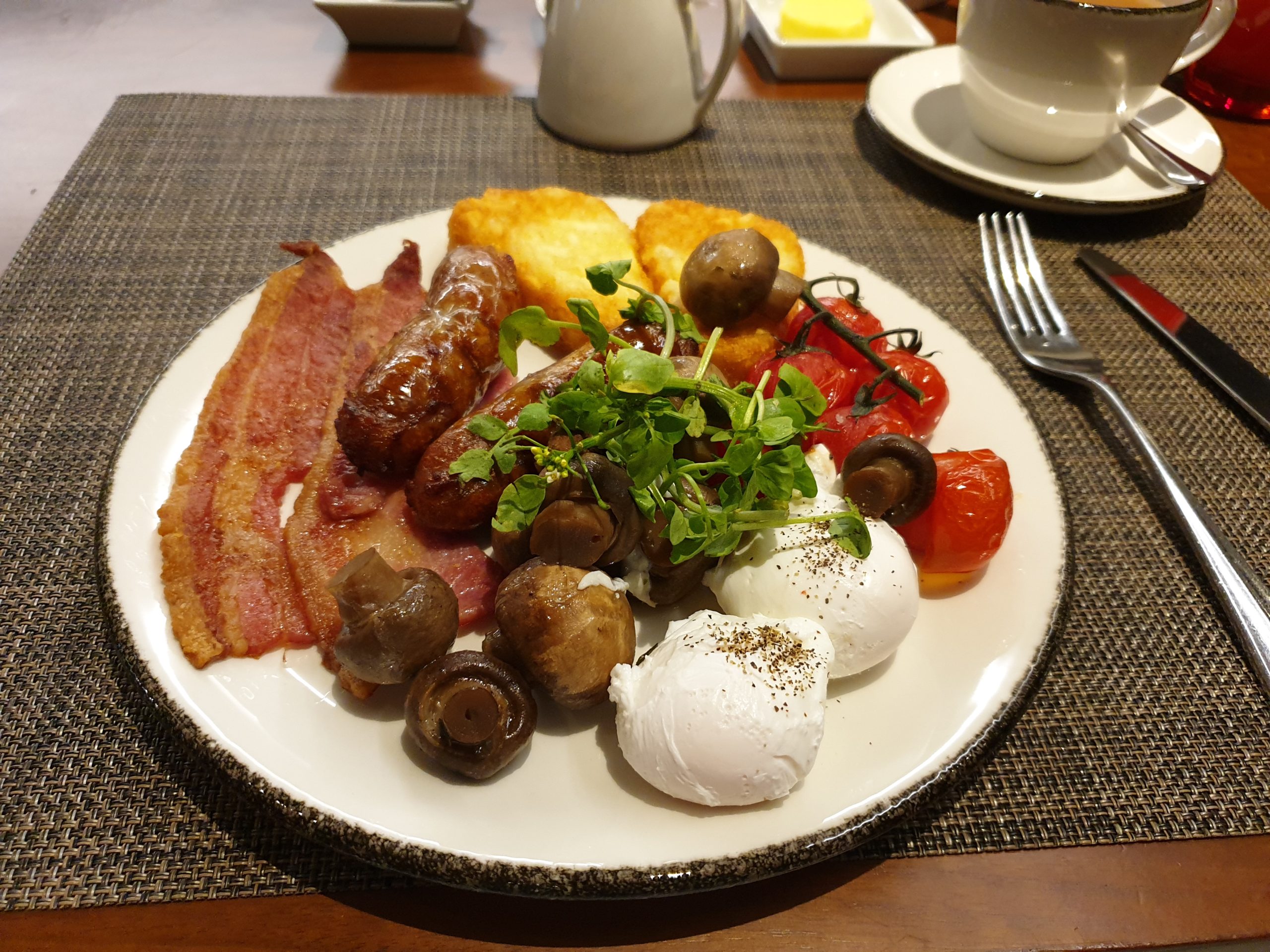 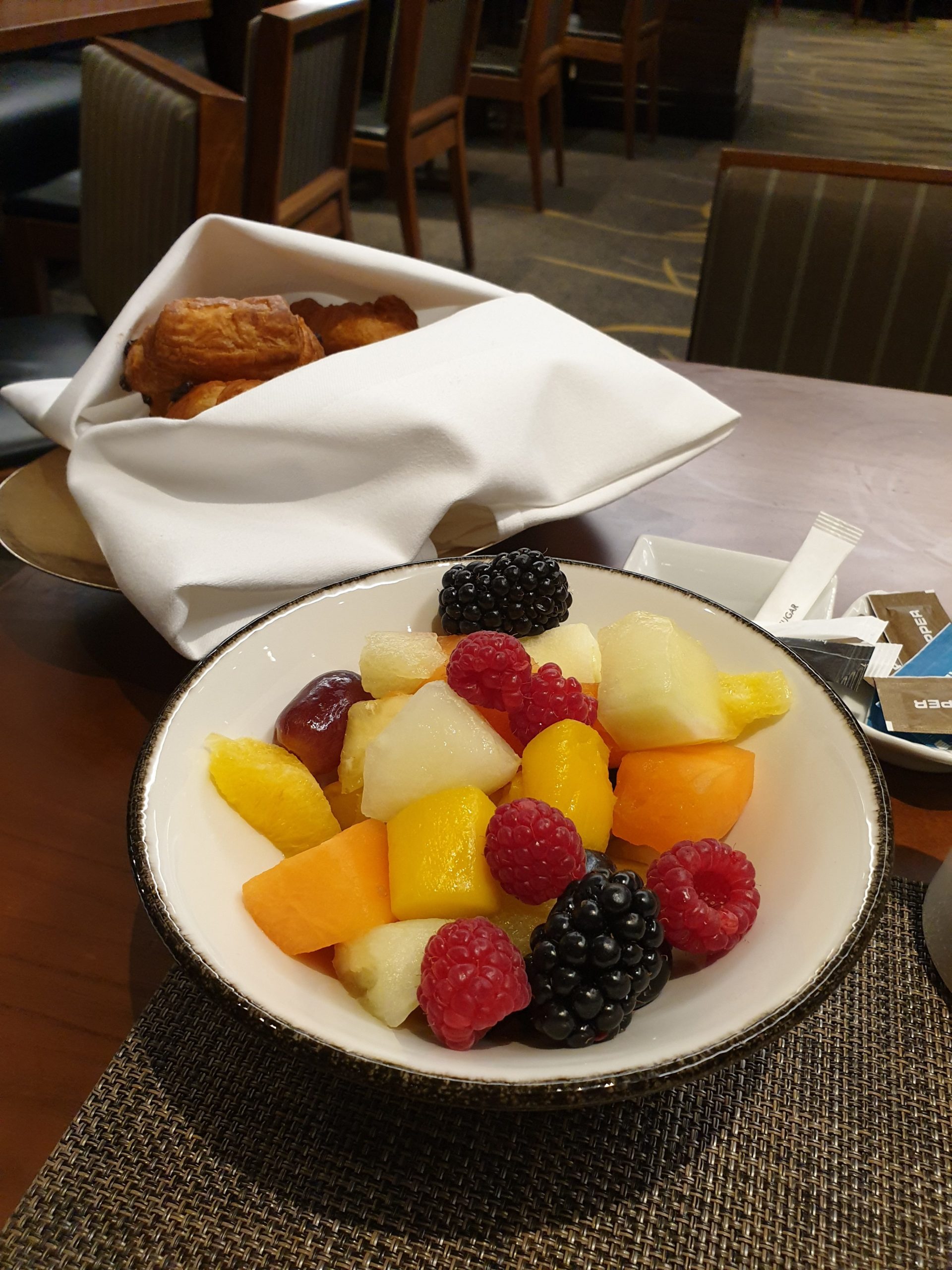 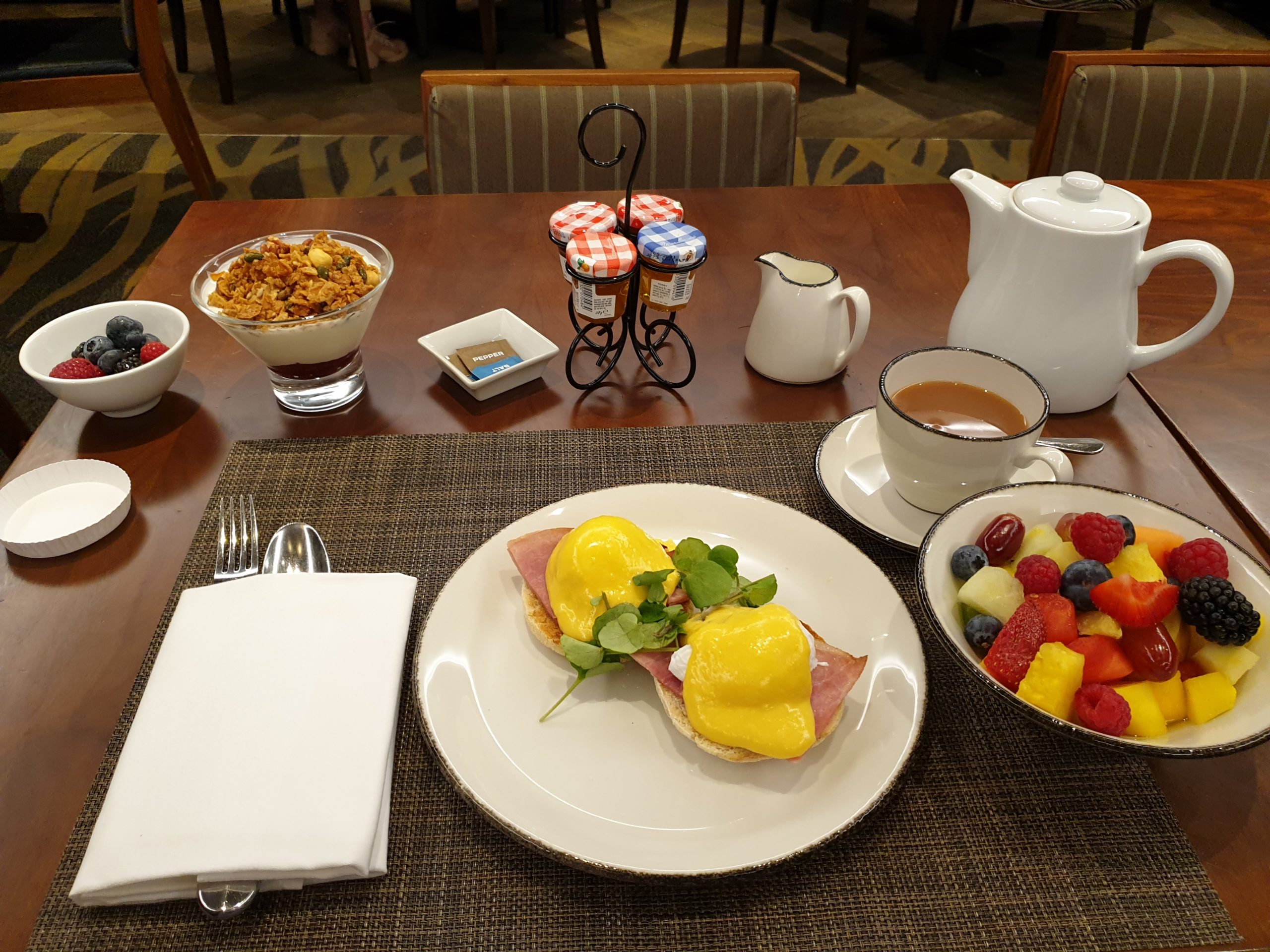 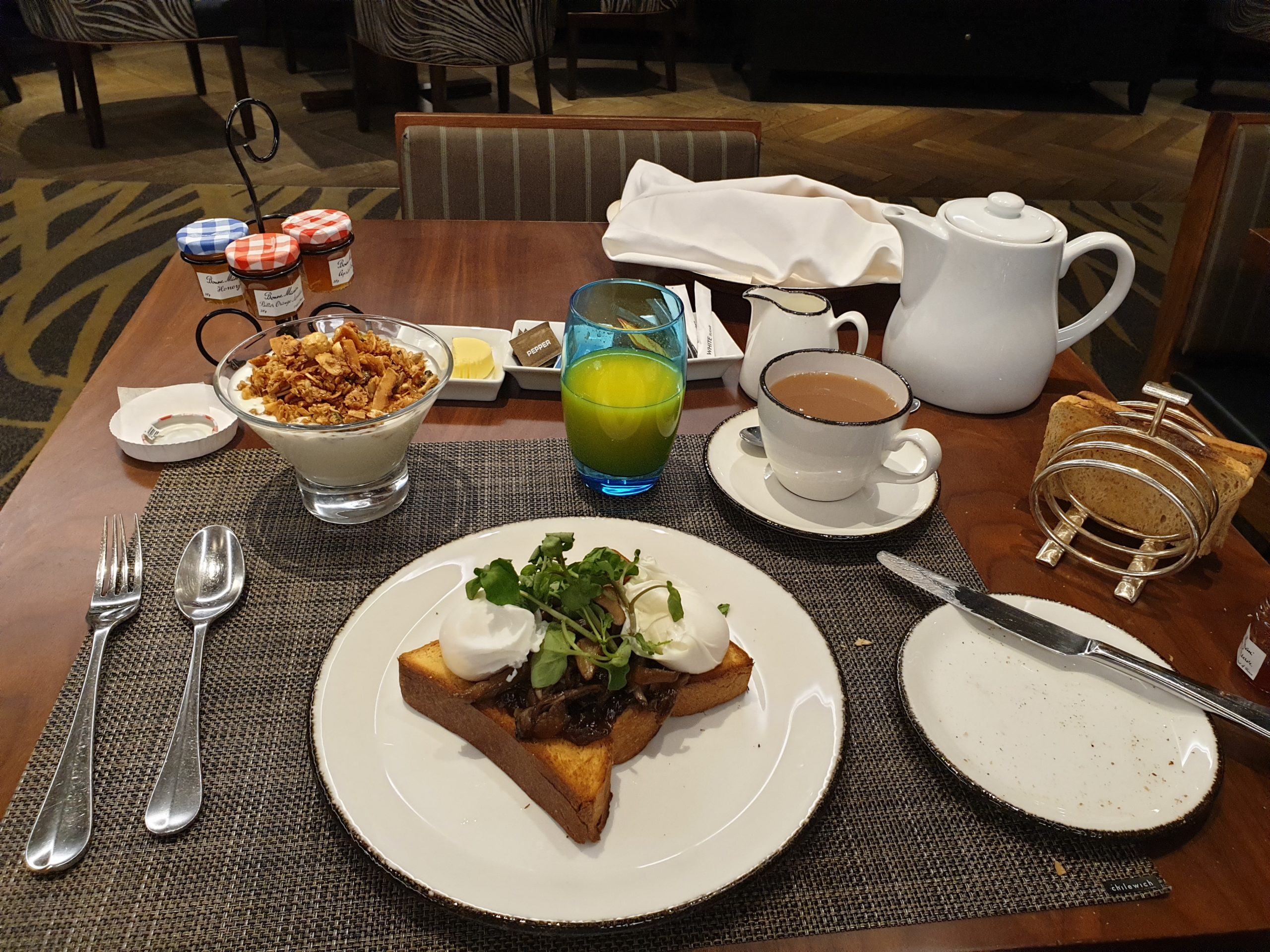 Overall the hotel did well in terms of the large upgrade and generous breakfast. It was good that you could choose whether you wanted housekeeping or not as some hotels have used COVID as an excuse not to offer any housekeeping.

The lounge closure was understandable with low levels of occupancy but it looks like the bar staff were not quite up to speed when Sam stayed. Hopefully, this will improve as staff get used to it. although in my experience the service in the bar has always been poor.

You can find more information on the Conrad Hotel St James here.