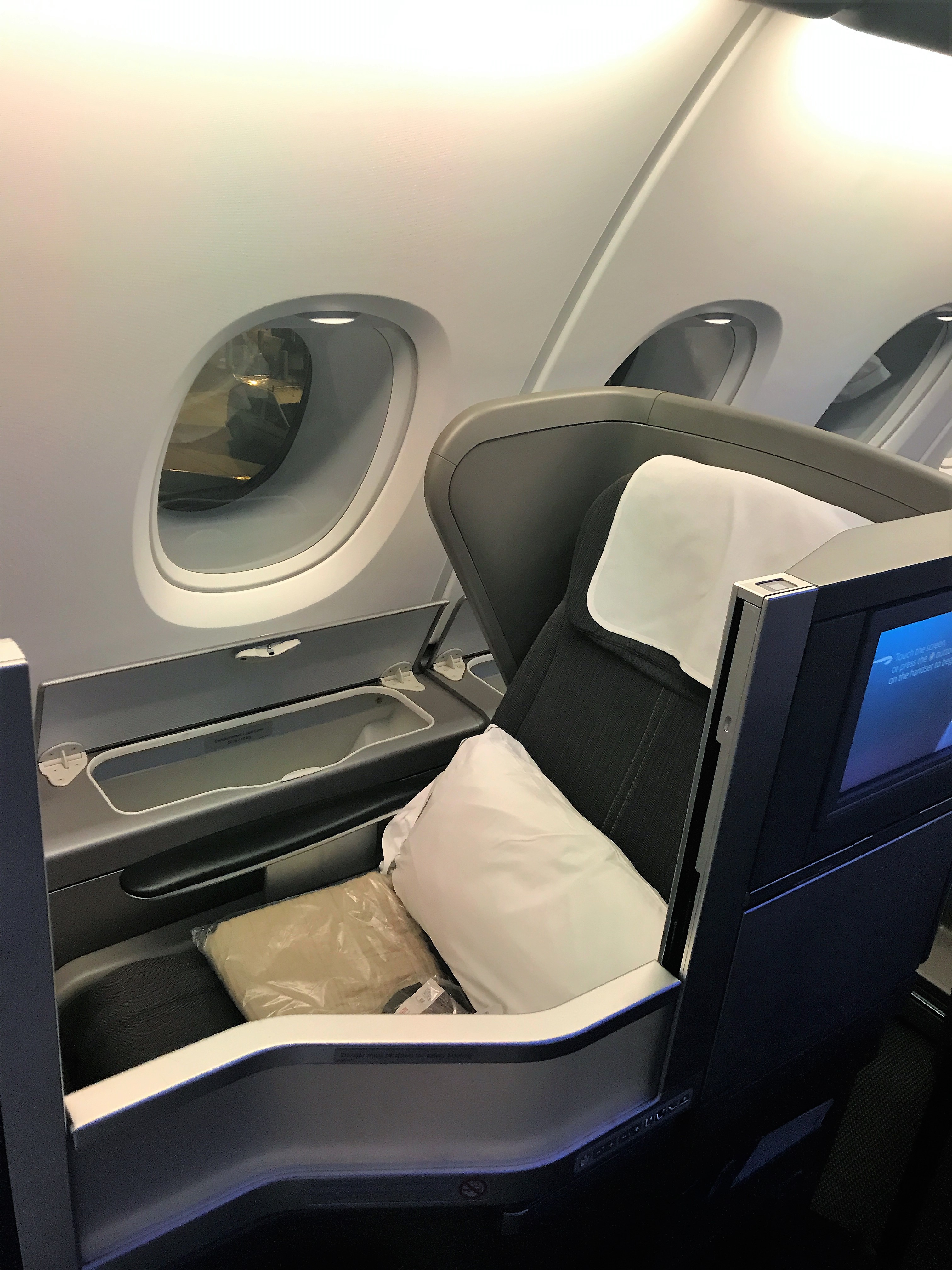 This is the final flight review in the series from our trip to Las Vegas. I came back via Miami whereas Roving Reporter flew straight back on a B747 from Las Vegas. You can read the B747 and A380 outbound reviews here.

Check in at Miami was swift and pleasant. The agent explained where the lounge was and I headed through the fast track security in about 5 minutes.

British Airways currently use the Premium lounge at Miami Airport in Concourse E. I had heard bad reports so I decided to head for the Centurion lounge which is available for Amex Platinum members. These lounges are mainly in the US but Amex are starting to open them outside the US with one opening in Hong Kong. The lounges generally offer a good standard of hot and cold food, several decent quality wines by the glass and bespoke cocktails too. The Miami lounge also offers free spa treatments. The lounge is in concourse D which is quite a long walk from the BA gates so allow lots of time if you decide to try it yourself.

Boarding was handled badly. There were signs up for seat numbers to guide people to the right doors which people were just milling around rather than being in a particular line. The announcements when they came were not very clear and I ended up nearly missing the Priority boarding as they started general boarding very soon afterwards.

I was on the Upper deck again but this time I had chosen 59A. 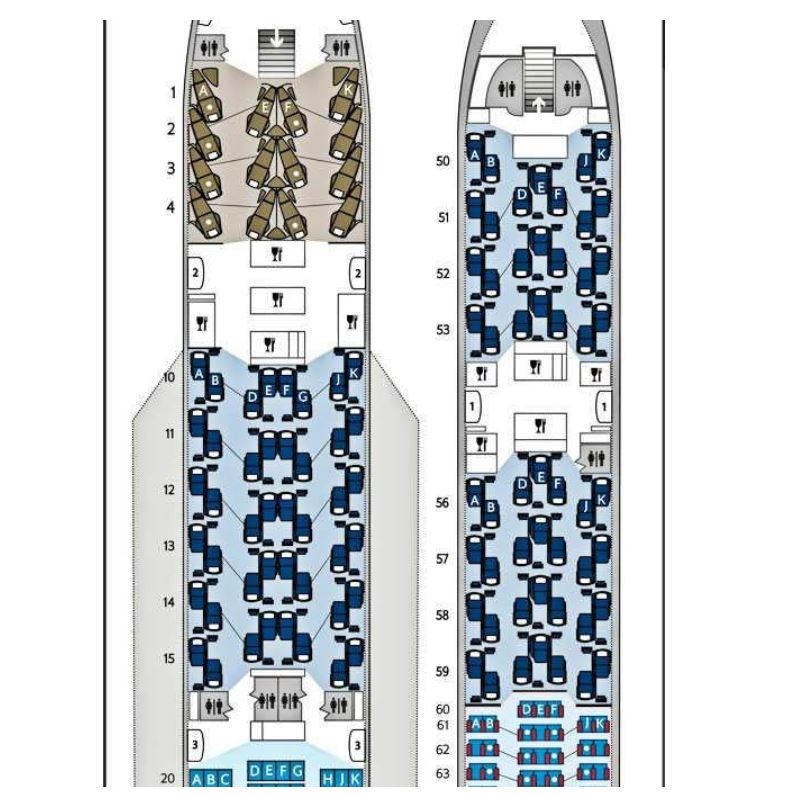 The usual welcome drinks of champagne and water plus the Elemis amenity bags were handed out prior to take off.

59A is an aisle access seat at the back of the upper deck Club World cabins. The disadvantage with this seat is that you are very close to World Traveller Plus and the bassinet positions at the bulkhead. It is a gamble on a night flight to choose these but one that I won as there were no bassinets in use. Before you can raise the divider you can have an awkward staring competition with the envious passengers in World Traveller Plus too!

I really liked the seat and found it a quiet location. It probably helped that it was a very empty flight and only around half full on the upper deck.

The seat had plenty of storage with 2.5 side bins and the usual lower drawer but the bins could have been cleaner. 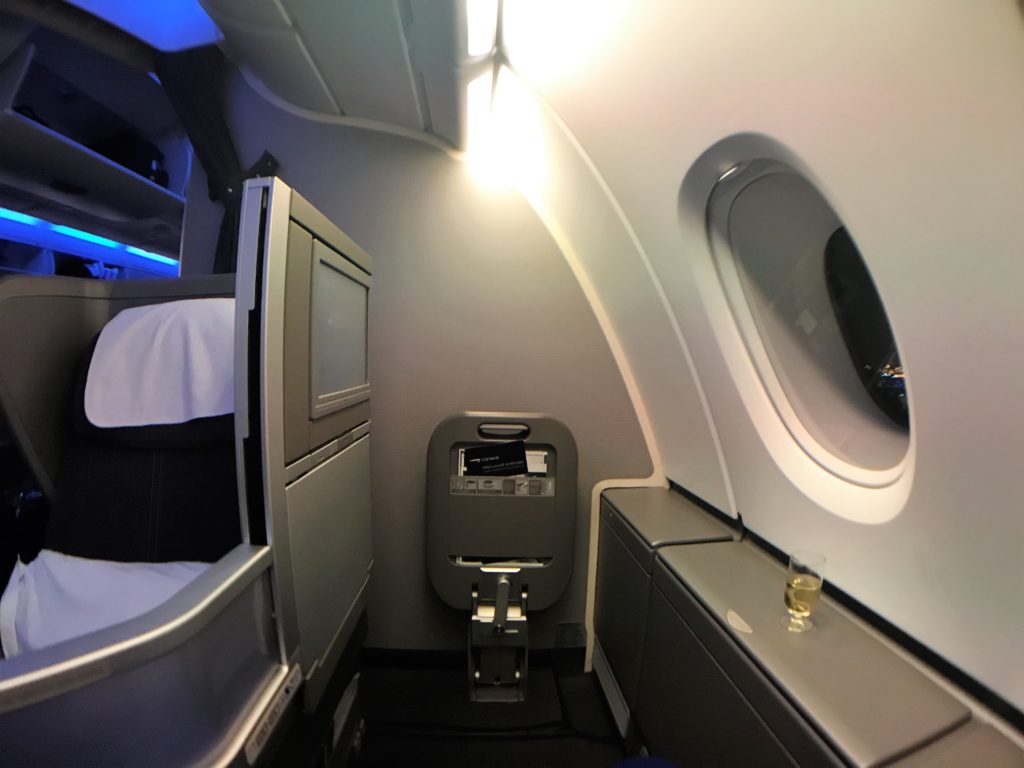 There was plenty of room around the seat. The gap to get in and out of the seat didn’t seem as bad here as in 53K and once the screen was up the seat felt very private. 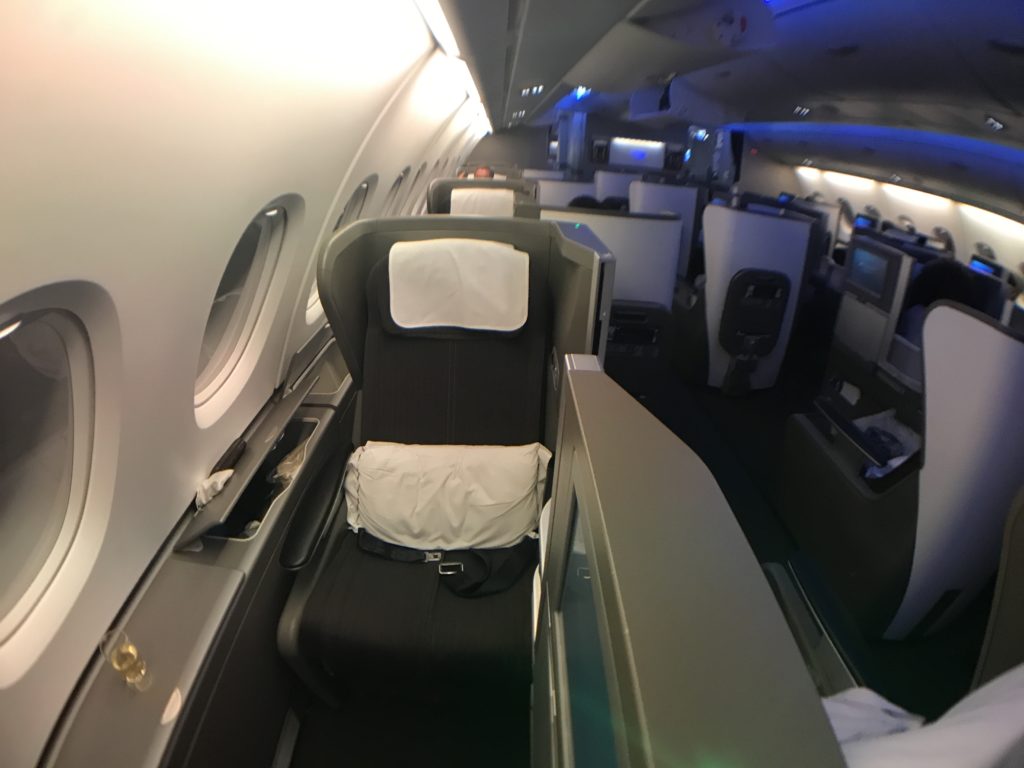 As the flight was half full I managed to get an extra blanket which I used as a mattress topper as well as an extra pillow. With these extras, the bed felt very comfortable in bed mode and I slept well.

Overall I preferred this seat to 53K which I had on the way out as it was quieter and more private.

The crew on this flight were Mixed Fleet who tend to be less experienced. The crew member serving me was very good and perfectly charming although I wouldn’t say that for all of the crew. The CSM also came over and gave me a sincere welcome back as a Gold member which I find happens much more frequently with Mixed Fleet. In the morning, however, I could both see and hear the crew mucking around in the galley, even though I was at the back of the cabin. I thought this was highly unprofessional and not something you would normally see with the more experienced World Wide crew.

Even though this was a night flight I decided to eat on board as it was a reasonably long flight time. The menu looked interesting: 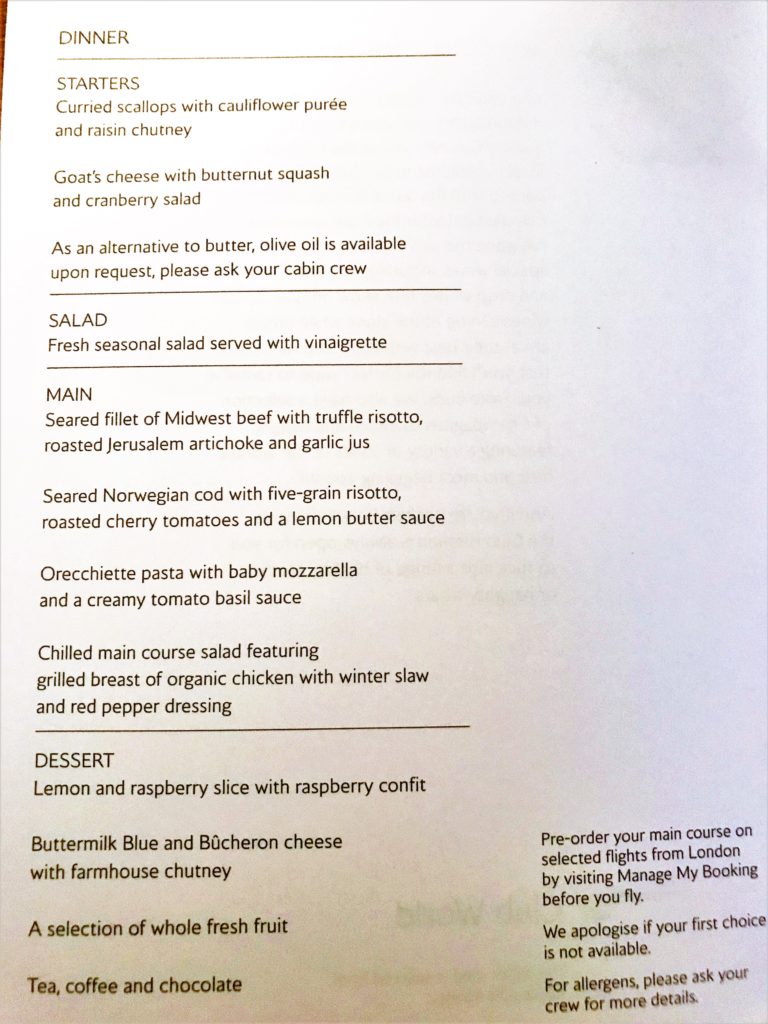 I went for the scallops to start which I was a bit dubious about as cold scallops never seem right to me.

The scallops were actually very tasty and nicely presented but didn’t taste very curried which is not a bad thing. The salad was fresh and had the same Pedro Jimenez sherry and olive oil dressing I had on the way out. The bread was also good with a cheese roll on offer which I liked.

For the main course, I fancied something simple so I bravely went for the pasta. This is normally something of a disaster area on BA for me. The pasta is normally quite dry and claggy. However, this dish was much better. The pasta wasn’t overcooked and had plenty of tasty sauce. My only complaint was that there was no sign of the promised mozzarella cheese. I don’t know if it had melted into oblivion or the menu was wrong. 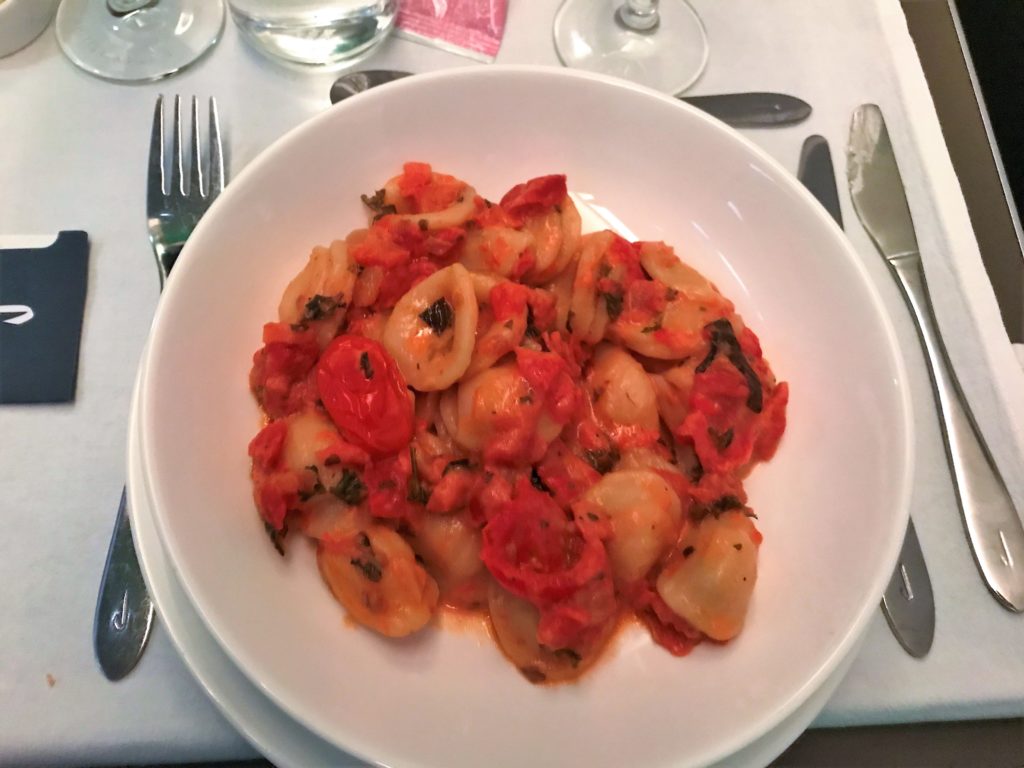 I enjoyed the wines on this flight:

I had a glass of the Chardonnay to start which was a lighter example of a Stellenbosch Chardonnay with less oak and then the Malbec which I have had a few times on BA and always enjoy.

Finally, as usual, I went for the cheese selection with a glass of port. I really enjoyed the Boucheron goat’s cheese and both portions were a good size unlike some of the previous stingy BA cheese offerings. The blue cheese was not my favourite as it was very strong, a bit like a Danish Blue. They also had the salted caramel chocolate which you get on flights from the US which I am rather partial to. I covered the Club Kitchen in my previous A380 review.

Breakfast is a weak area in my opinion for BA, both on board and in the Club lounges. This was no exception:

Breakfast was served pretty late on this flight at around 1 hour and 10 minutes before landing. I’m guessing that because they had such a light load on the upper deck they had worked out they would have enough time to serve everyone and decided to let people sleep longer.

I am not the biggest fan of the bacon rolls so I decided to save myself for the wonderful American Airlines arrivals lounge at T3 instead. I just had a smoothie with mango and banana which are always pretty good and a cup of tea. 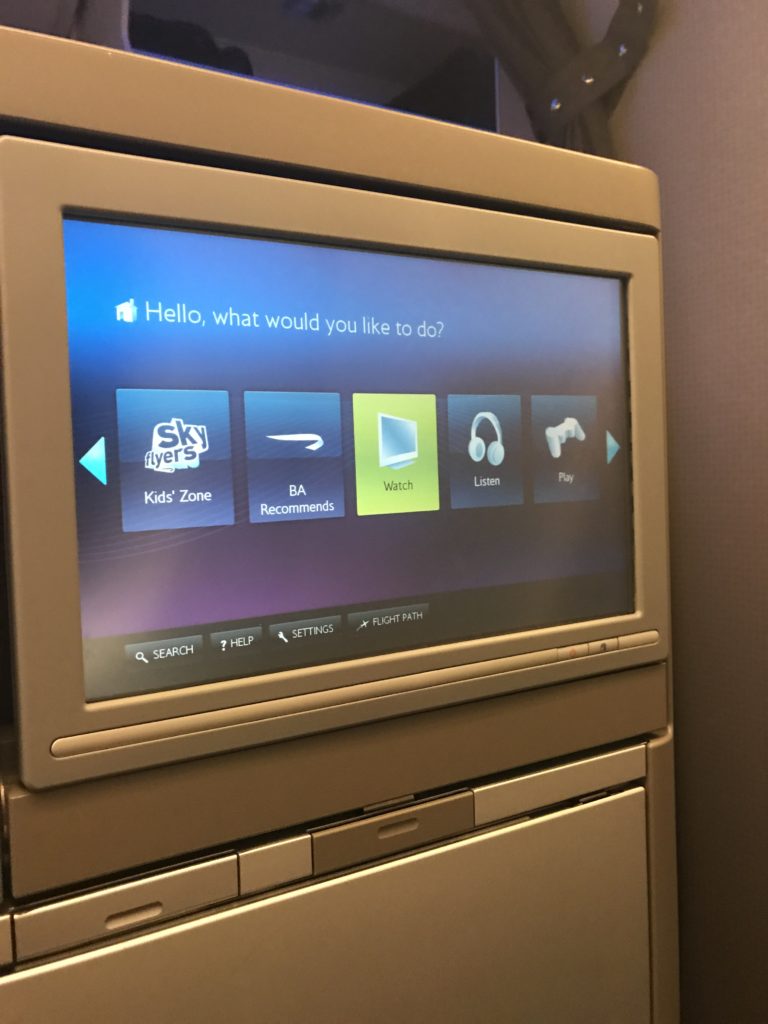 The screen was easy to use either by touch or with the handheld controller and it had good definition. Despite there being a new range of movies onboard from my outbound flight, there was nothing that caught my fancy so I used my iPad to watch my own programmes. One disadvantage of the A380 over the B747 upper deck window seats is the width of the side bins. It is not quite wide enough to easily place an iPad for watching, unlike the wider B747 bins.

Overall this was one of the better night flights I have had with BA apart from the breakfast. The seat was very comfortable and quiet for sleeping and the crew member serving me was excellent. 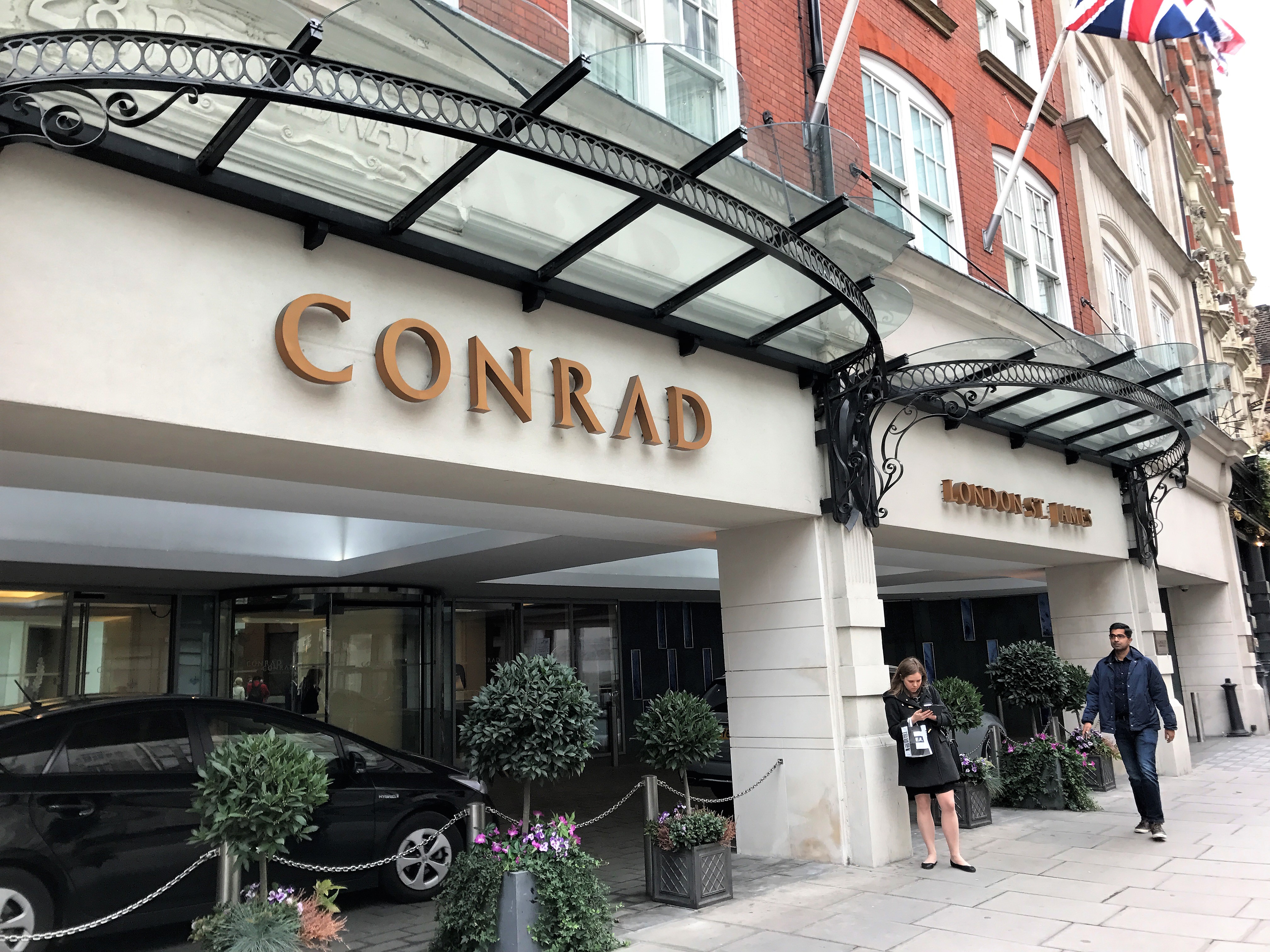 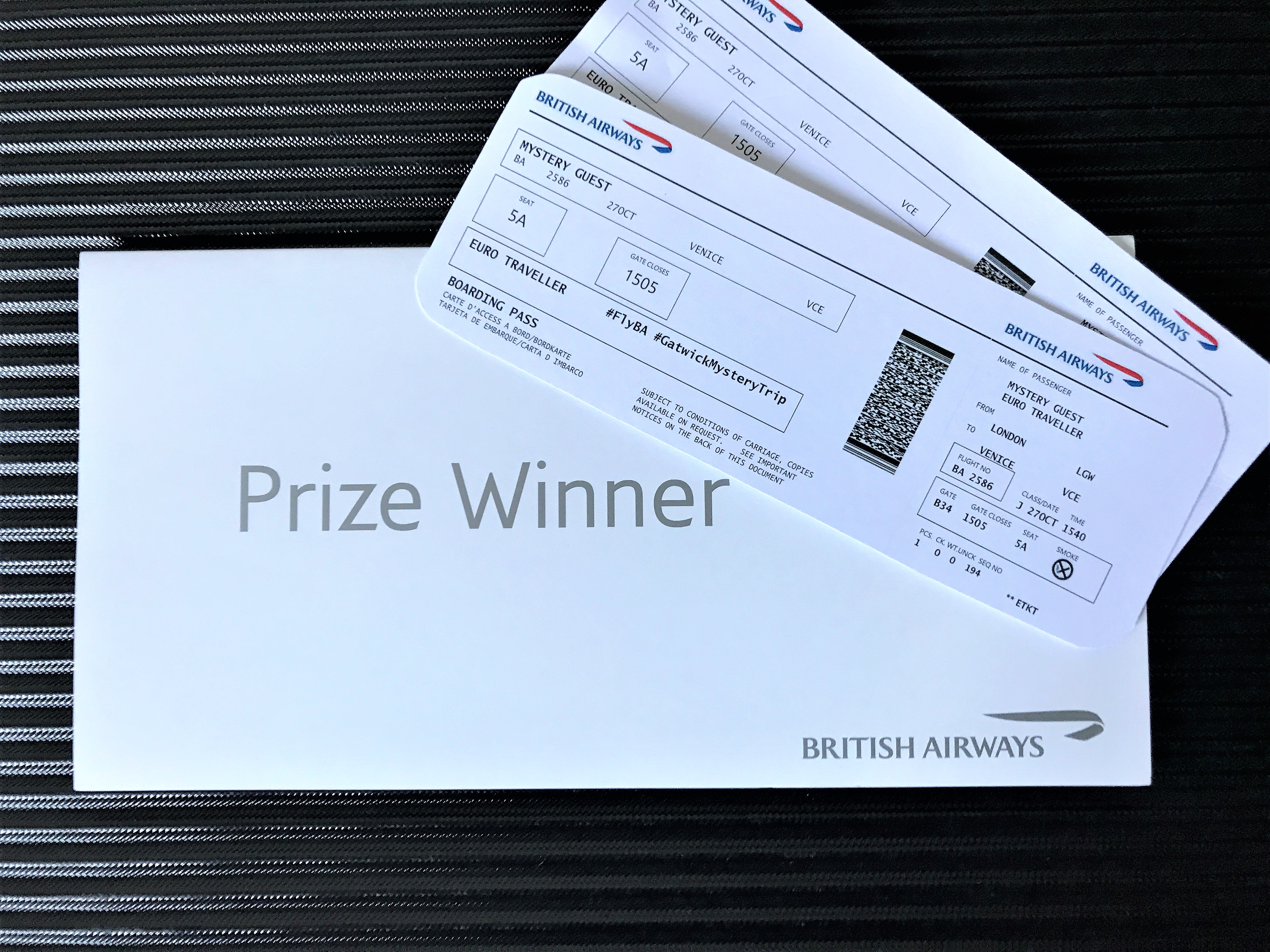