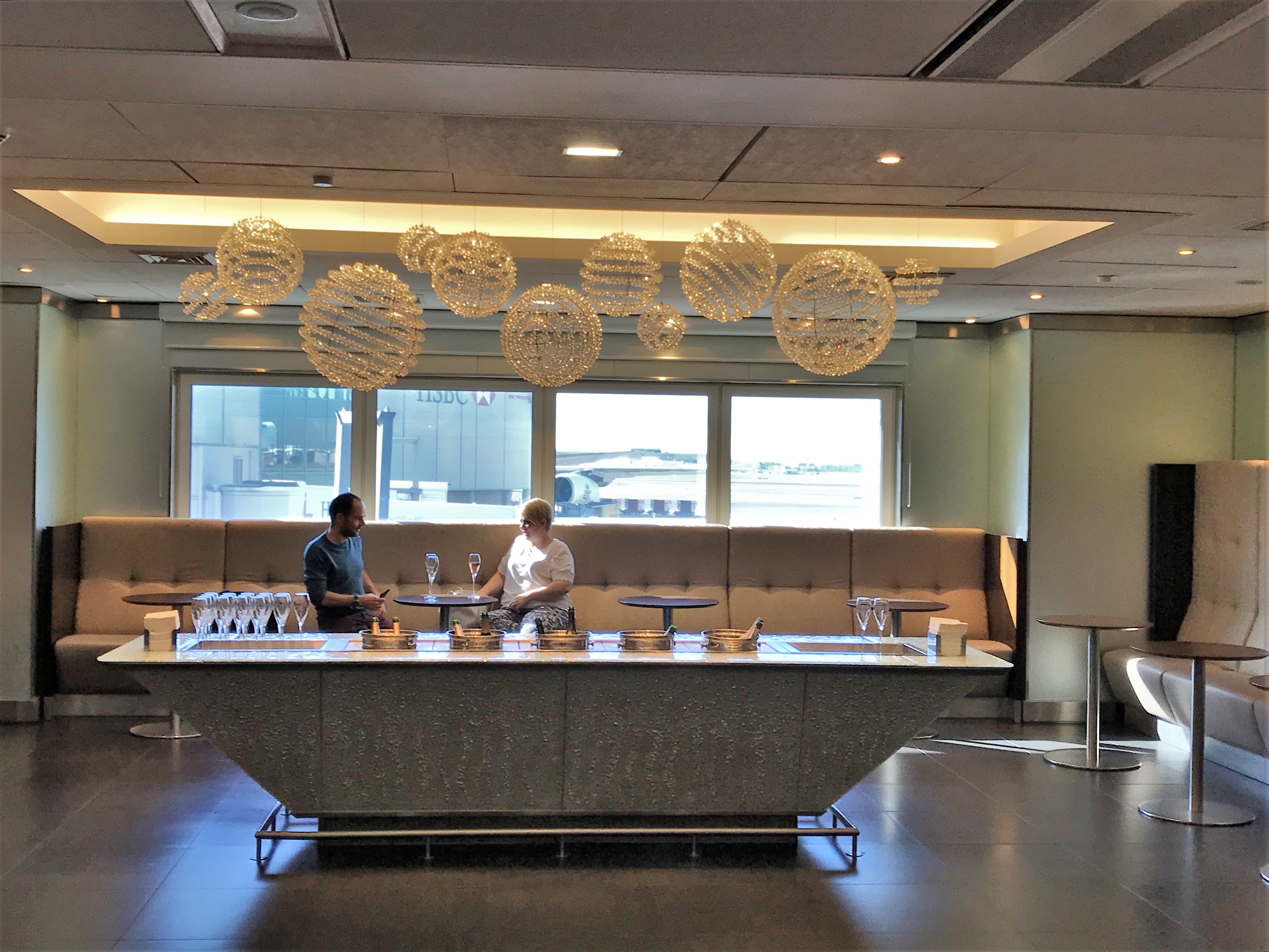 In an effort to review all the BA lounges at Heathrow, both Roving Reporter and I spent some time in the T3 BA lounges a couple of weeks ago. As I have mentioned before, there is a good selection of lounges at T3 including AA, Cathay and BA. In the future, once the AA lounge has been refurbished and the new Qantas one opens, you will have to allow a good few hours to enjoy them all! So is the BA lounge worth visiting or should you go straight to the Cathay Lounge? You can read my reviews of the Cathay lounges in these articles: First lounge, business lounge.

One reason to head to the BA lounge first, is if you are interested in a spa treatment. Up until a few years ago, there was no spa at T3 but there is now a similar range of treatments that you find at T5 (no grooming or shave treatments though). You can pre-book treatments within 28 days of departure if you are travelling in First. For everyone else, you will need to ask at the lounge when you arrive. If you are set on having a treatment ,I would advise arriving at least 3 hours ahead. I am rarely lucky enough to get an appointment except for a massage chair even 2.5 hours ahead of time. You can find the range of treatments to choose from here.

The lounge at T3 is very similar to T5 and when I visited on a Friday morning, it was pretty busy. As you enter the lounge you will walk into the food area. Most people tend to sit here to eat, so it is generally the busiest area. You are better off collecting your food and walking further into the lounge to get some peace and quiet.

As you head toward the back of the lounge it is usually much quieter. There is also plenty of natural light in these areas, plus a view of the airport. 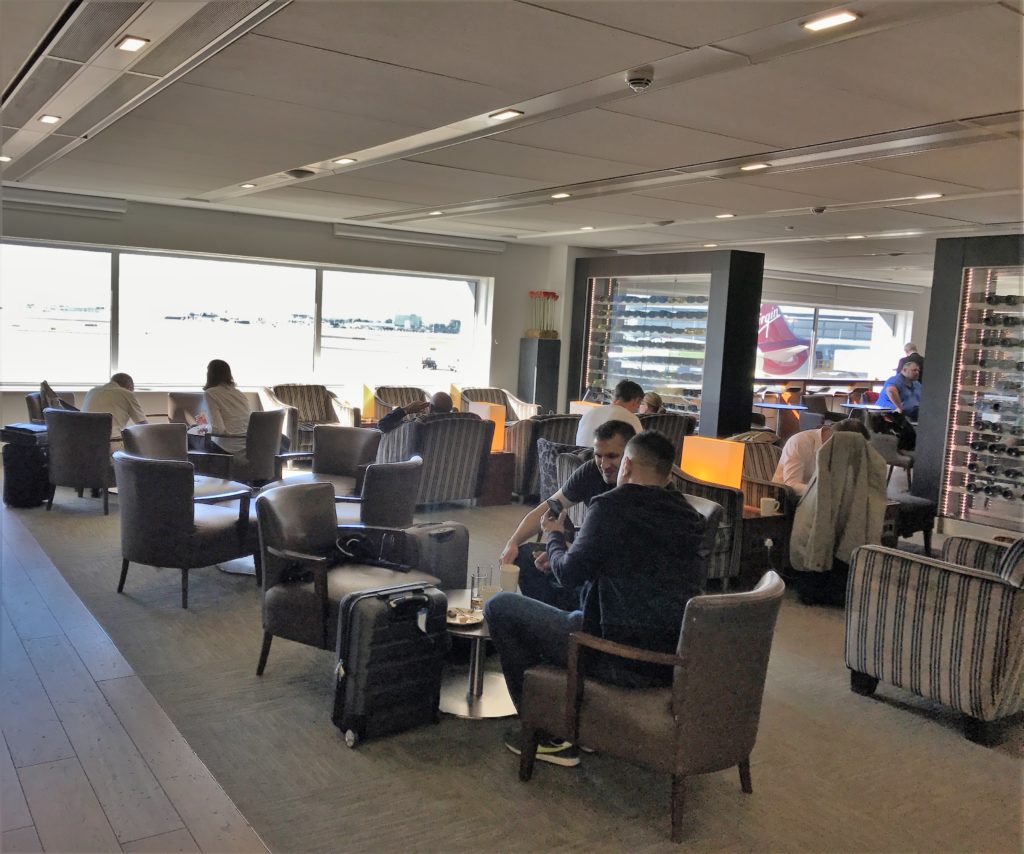 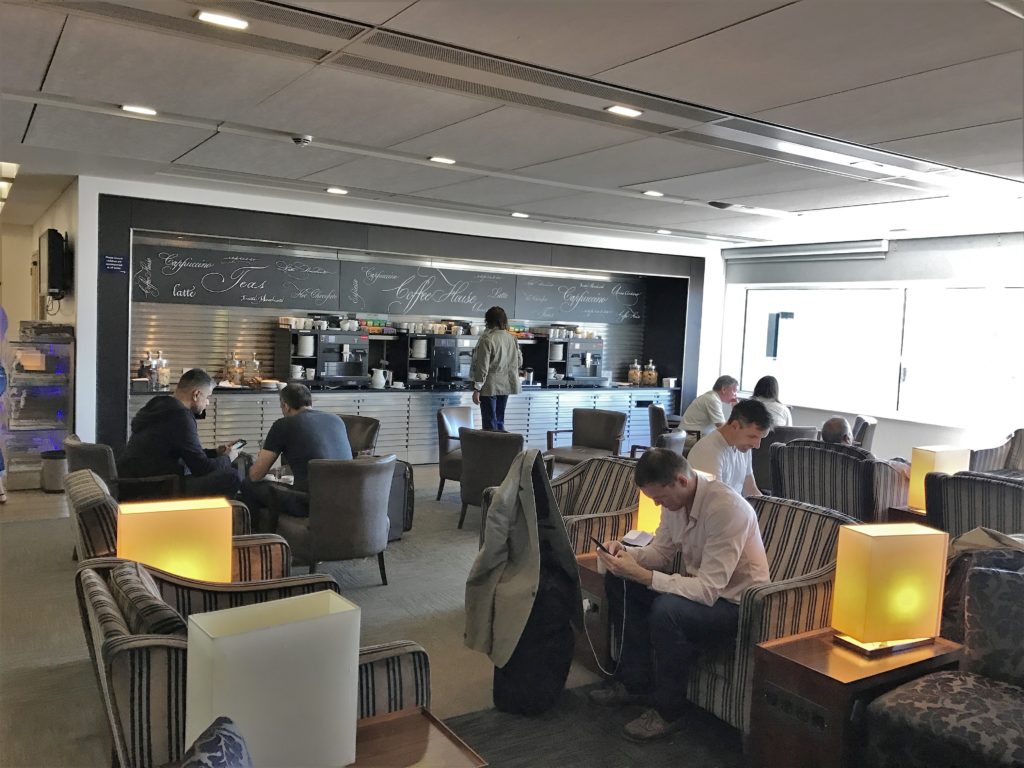 As usual the BA Club lounge breakfast was pretty dismal. Breakfast is served until 12pm apart from the bacon rolls. BA have now extended the bacon sandwiches until 11am and judging by recent surveys they have been considering improving the food at breakfast.  Given that this costs money, I doubt anything much will happen soon. The food on offer was:

There are the same coffee machines as T5 which I think produce a decent cup of coffee and a selection of teas with biscuits in jars. For juices they have orange, tomato, apple and cranberry which gives plenty of the options to be creative with the #loungecocktailchallenge. The choice of other soft drinks is pretty standard, apart from the fact that they have Fever Tree tonics. The alcoholic drinks selection for me is where BA triumphs over some other lounges. 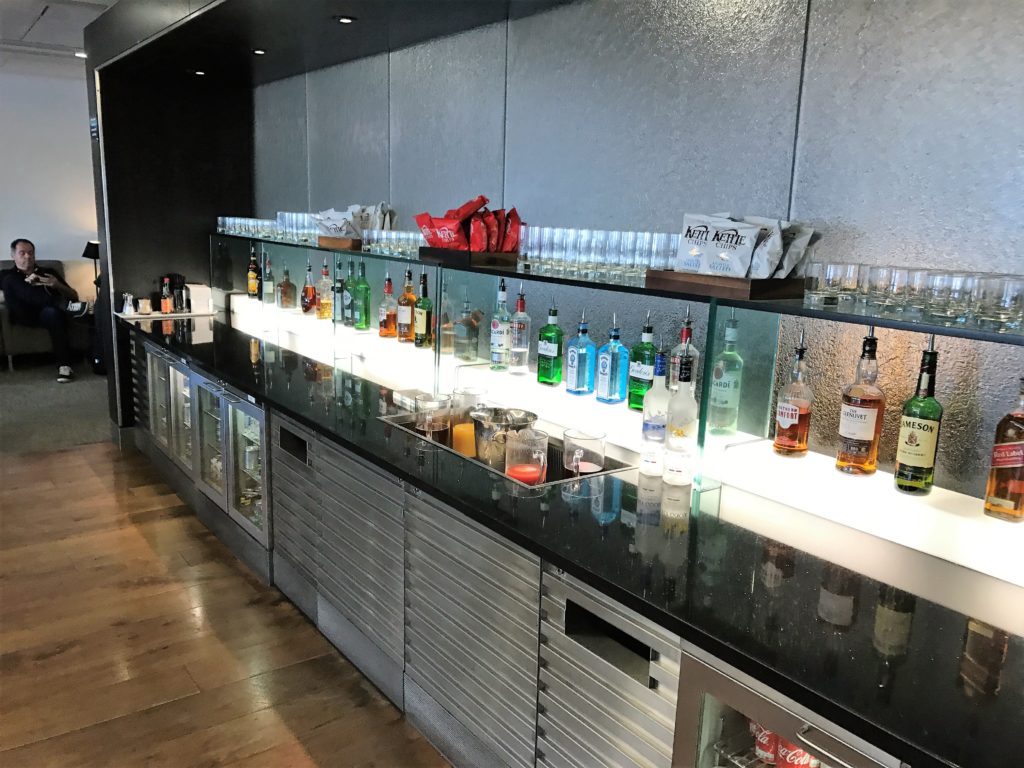 For beer drinkers there was a choice of 4: Amstel Light, Tribute, Heineken and Tiger.

The wines looked surprisingly good, although I didn’t get a chance to sample them this early in the morning. They could perhaps have done without 3 different chardonnays though. 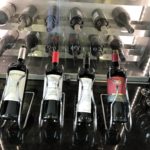 Champagne is available but you will need to ask one of the staff to get it.

There was a large business area with PCs, multi function printers and head phones for working or watching entertainment. There are plenty of magazines and papers to read as well. If you have children there is a very small kids area with a few things to entertain them and high chairs. The toilets are slightly better than T5 but still have that NHS feel about them. 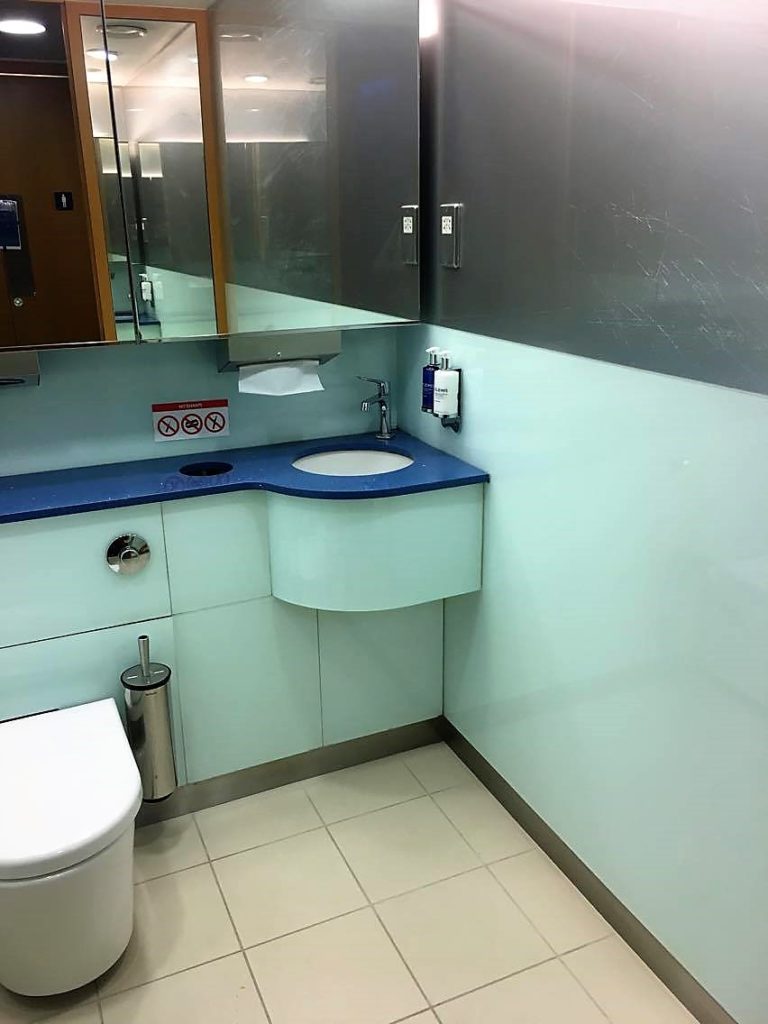 The Galleries First lounge is usually reasonably quiet whenever I have visited. Again, it is very similar in layout and food/drinks as T5.

As you enter, you are facing the champagne bar. This is normally the quietest seating area, as the seats aren’t overly comfortable.

The choice in this lounge is much better than Club but the same as the other London BA lounges. A full English breakfast is served plus the same cold items as Club with the addition of a cheese selection. The cooked food is normally pretty tasty. In addition you can order a small selection from the menu.

There is also an assortment of breads which you don’t get in Club.

On this occasion there were actually several champagnes to choose from, as BA appear to be having supply problem with the usual Henriot. As well as Henriot Rose, there were Duval Leroy 2006 Millesime Blanc de Blanc and Rose champagnes. The champagnes seem to be changing weekly at the moment, so who knows what you will get when you visit?

I tried the Mersault. It wasn’t a particularly great Mersault but it was certainly drinkable.

The spirits selection is very similar to the Club Lounge except with a higher quality Johnnie Walker.

These are pretty much the same as Club but I didn’t see a kids area. There was a smaller business area with PCs, multi function printers and head phones for working or watching entertainment. There are plenty of magazines and papers to read as well. The toilets are slightly better than T5 but still have that NHS feel about them.

Other than a wider selection of spirits and help yourself wines, I would normally choose the Cathay lounges Business and First over BA. However, if you wanted a spa treatment you may want to pop in here first. It is also easier if you are in a hurry as most of it is self service.

You can find more information about the British Airways lounges here. 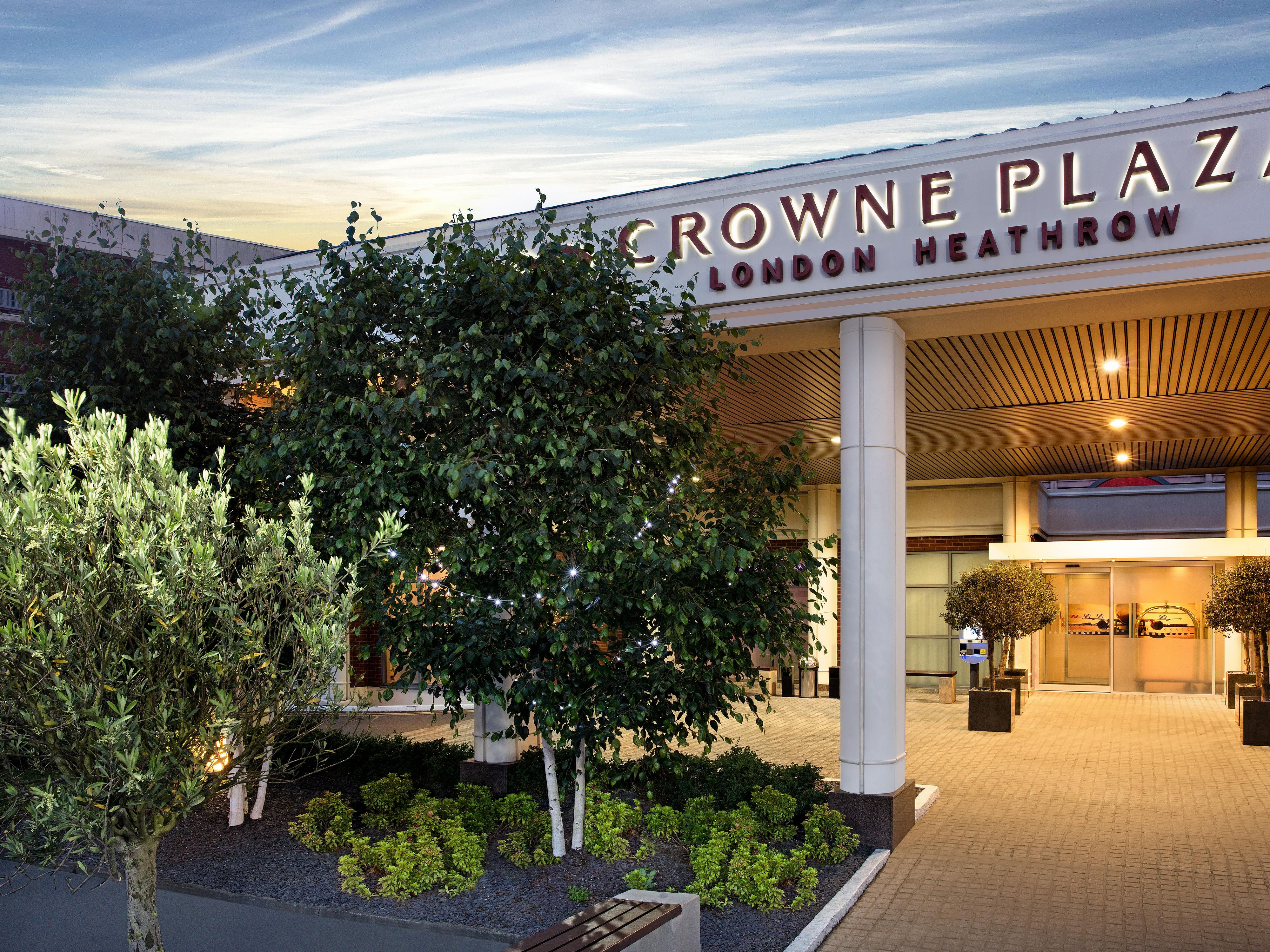